A dairy farm in Fgura has been blasted for the "pain, suffering and abuse" of the animals on site.

Disturbing images uploaded to social media by the group Animal Liberation Malta show cows and goats living in less than ideal conditions in overcrowded spaces and locked in rooms with no natural light.

One photo depicted a cow with its back legs tied after its pelvis had been damaged. It had given birth far too many times and needed her hind legs to be tied or else she would not be able to walk, the animal rights' group claimed.

Another photo showed another cow with its placenta hanging out after giving birth.

Calves which "had been taken from their mother" were living in a dark dingy room waiting for a farmer to slaughter them, the group said. 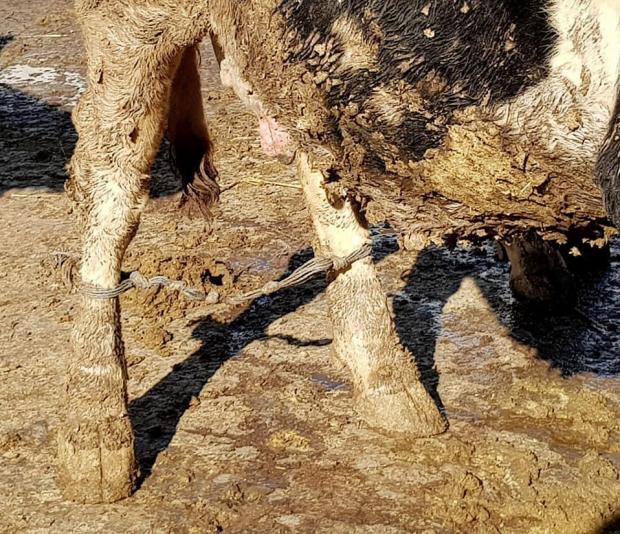 One of the cows was seen with its legs tied. Photo: Animal Liberation Malta

The group said it reported the farm to the authorities "countless times". The farm owners have been taken to court for their abuses but they always won the case, the group said.

Times of Malta is informed that veterinary regulations directorate inspectors were on site on Thursday morning to verify the claims made through the social media post.

The chief vet Roberto Balbo said the farmer passed away around a month ago and the children were taking care of the farm but could not cope with the increased demand.

Following the inspection, he told Times of Malta that the heirs had been requested to clean the farm and to call the vet to medicate few animals in need, but there was no need for legal action.

The Parliamentary Secretariat for Animal Rights said inspectors had found the farm to be overcrowded, and less animals should be on the farm to ensure better management of the facilities.

“Since the owner of the farm died recently, discussions are ongoing on the future of this farm,” the Parliamentary Secretariat said.

A report on the investigation into the farm will be sent to the Animal Welfare Commissioner, the secretariat said, insisting that no animal cruelty should be tolerated.

Animal Liberation Malta ended its post with a call for people to turn away from cows' milk and find plant-based alternatives.

"Dairy farms like this are causing havoc to the environment and are highly unsustainable," the NGO said.

The social media post caused outrage on social media, with many calling for an end to the "disgusting" practices.