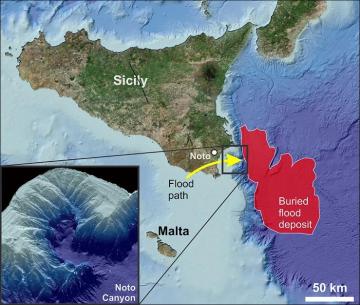 Marine scientists have uncovered evidence of one of the largest floods in Earth’s history in the central Mediterranean seafloor.

The flood, known as the Zanclean flood, is thought to have ended the Messinian Salinity Crisis (MSC), a period during which the Mediterranean Sea became partially dried up. Due to shrinkage of its connection with the Atlantic Ocean, the Mediterranean Sea was transformed into a giant saline lake that was partially evaporated by the dry climate of the region, six million years ago.

One of the theories proposed to explain the refilling of the Mediterranean Sea at the end of the MSC some 640,000 years later is a catastrophic flood through the Strait of Gibraltar.

The passage of the Zanclean flood across the Malta Escarpment ... resulted in a 1.5 km high waterfall (equivalent to five times the height of the Eiffel Tower)

By examining the most comprehensive collection of seafloor data from offshore eastern Sicily and the Maltese Islands, an international team of geoscientists has now discovered an extensive buried mass of material that is thought to have been eroded and transported by the Zanclean flood. This mass covers an area equivalent to that of the island of Crete and is up to 900m thick in places.

The passage of the Zanclean flood across the Malta Escarpment – a long submarine limestone cliff – resulted in a 1.5 km high waterfall (equivalent to five times the height of the Eiffel Tower).

This water eroded a 5km wide and20 km long canyon on the seafloor that is still preserved underwater offshore the city of Noto (south-east Sicily).

This discovery is important because it demonstrates that the level of the Mediterranean Sea during the MSC dropped by more than a thousand metres, and that the end of the MSC coincided with a catastrophic flood that affected the entire Mediterranean Sea.

This study, which was recently published in the international journal Scientific Reports, was led by Aaron Micallef and DrAngelo Camerlenghi, and involved scientists from the University of Malta (Malta), OGS (Italy), ICTJA-CSIC (Spain), University of Brest/CNRS (France), University of Catania (Italy), University of Kiel and GEOMAR (Germany). The work was supported by Marie Curie Actions, the European Research Council and the MEDSALT COST Action.