The exhibition rajt ma rajtx... naf li rajt currently taking place at Valletta Contemporary features a set of contemporary drawings created with the use of eye-tracking technology. The artist Matthew Attard speaks to Lara Zammit about the works and their underlying themes.

“The enigma is that my body simultaneously sees and is seen,” wrote French philosopher Maurice Merleau-Ponty in his essay ‘Eye and Mind’ in The Primacy of Perception. “That which looks at all things can also look at itself and recognise, in what it sees, the ‘other side’ of its power of looking.” 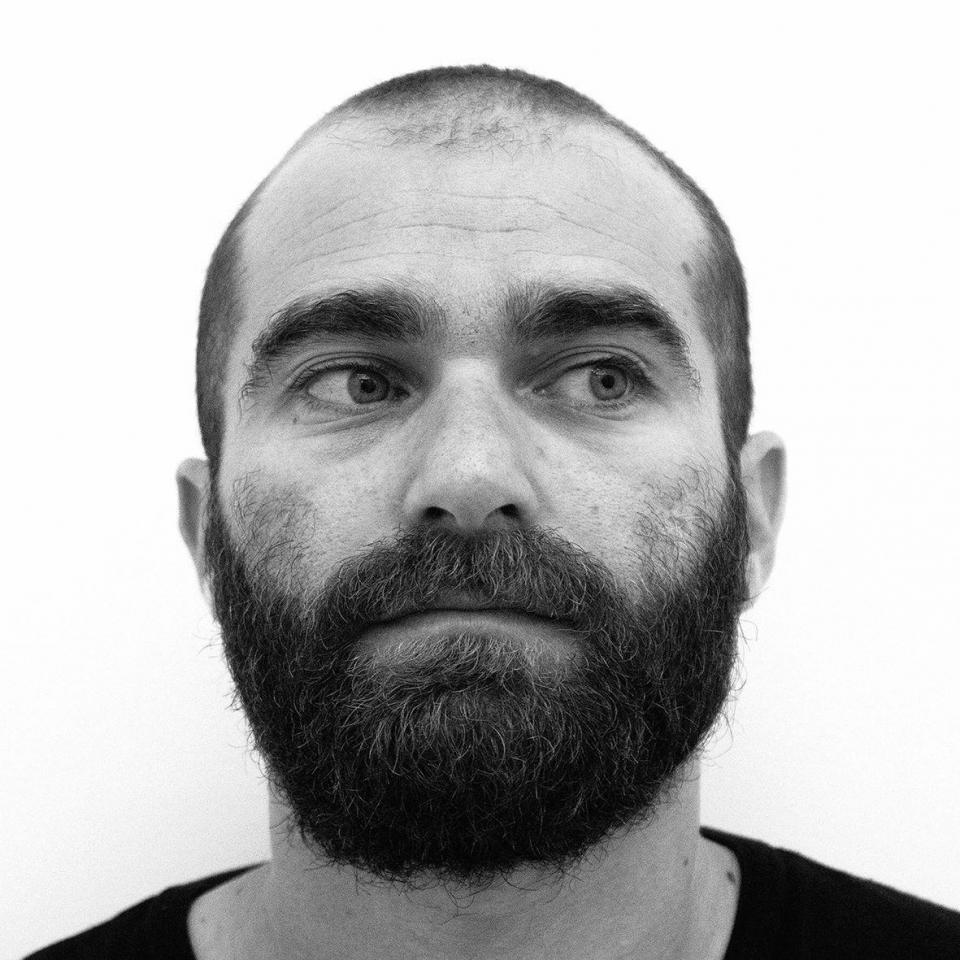 The crux of the exhibition rajt ma rajtx... naf li rajt is this “power of looking” which the artist Matthew Attard explores through the difference between looking and seeing, whether in terms of mundane things or more serious ones. The exhibition displays a set of drawings created using an eye-tracker – a device used to scan people’s gaze and record this in the form of data.

The exhibition was curated by Elyse Tonna, whose curatorial input Attard describes as “crucial to the entire process of the exhibition” since they developed and conceived of the entire conceptual and practical framework together.

“This show stemmed from my PhD studies in Edinburgh,” explained Attard. “In these works, I am drawing with my eyes through the data being gathered by an eye-tracker.”

Using the eye-tracker as an extension of his body in the making of his art, Attard goes on to say that it’s almost as though he is drawing as a cyborg.

“I’m entrusting the machine to tell me where I looked. I don’t want to go into how accurate the eye-tracker is; everything is more grounded in the metaphor of it – I’m practising from the point of view that we are already cyborgs on a daily basis through the use of our phones, for example.

“By cyborgs I mean the kind Donna Haraway speaks of, not those of science fiction. Even using a pencil makes me a cyborg, for instance – there still is an extension of my mind in that tool and that tool is becoming part of my body.”

The eye-tracker is therefore envisioned as a tool, but moreover as “a silent witness of the eye”. The ultimate aim of the exhibition is the exploration of eye drawings where the eye-tracker becomes the drawing equipment/collaborator while uncovering notions of witnessing and seeing, maintains Attard, saying that there is also a satirical fabric to the works. 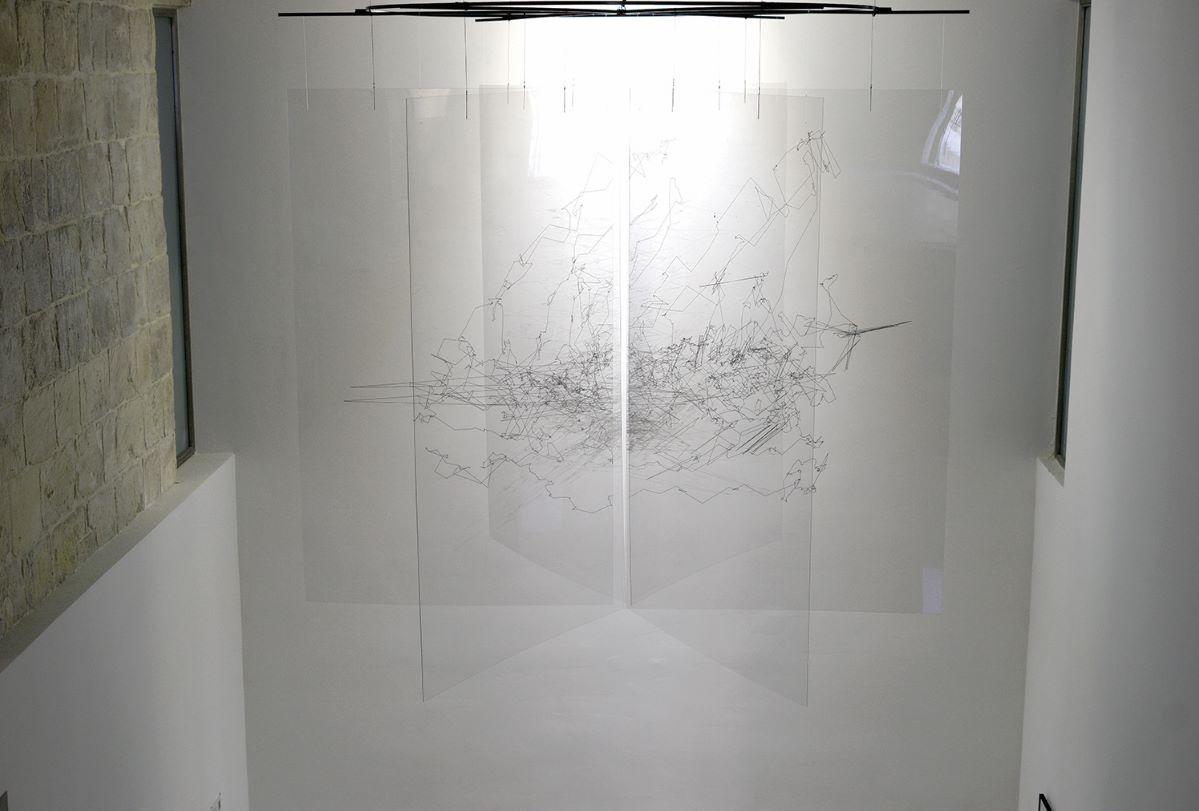 Elaborating on his use of eye-tracking technology for this body of work, Attard explained that the eye-tracker does not produce drawings itself.

“It only gives me a data set. Then I take those data points and place them into another 3D software, and it is from there that I make the drawings. Most of the drawings here are pen plotted using a robotic arm making precise markings based on the data inputted.

“Even in the pieces themselves there is a process of collaboration. I can only control things to a certain extent. I am only orchestrating the context with results emerging through the collaboration. The exhibition underwent the same treatment – the curatorial input ran parallel to my own, along with the supporting work of other artists,” he went on.

In his work Id-Dgħajsa tal-Fidili, composed of digitally printed eye drawings on intersecting Plexiglas sheets, Attard interprets the allegory of the ship of fools.

“I always wanted to work on this idea. The exhibition title is in Maltese and I wanted to use titles in the Maltese language throughout the exhibition, so when it came to translating ‘ship of fools’ into Maltese, we found it to be a bit tricky, but suddenly ‘id-dgħajsa tal-fidili’ seemed to work very well due to the multi-layered meanings it contains – strictly speaking, ‘fidil’ is not a fool, but we use it as such in our oral culture”.

We need to acknowledge the culture of silence we have

Attard explained that what is depicted in the work is the result of an eye drawing done in front of a graffito of a ship on the outside wall of the chapel in Wied Qirda.

“There’s a long tradition of such graffiti in the Mediterranean. We tried to find graffiti that were on churches since they could be interpreted as an ex voto for having been saved at sea. So these are indeed dgħajjes tal-fidili (vessels of the faithful) but they, and we, are also blindly faithful. I’m using technology and data to represent all this, but just how faithful are we to data?”

Apart from this, the work also explores the intimacy of someone’s gaze by positing what becomes of us when we inhabit someone else’s vision.

“Here I am trying to draw with my eyes the traces of an amateur work, not that of an artist, so then I myself am being an amateur in so doing. In a way, I am doing away with my body in the process of drawing but in reality, I am using it differently.

“I am taking away what I have learnt and what I know from the equation. I am confronting myself with the trace of someone who wasn’t an artist.” 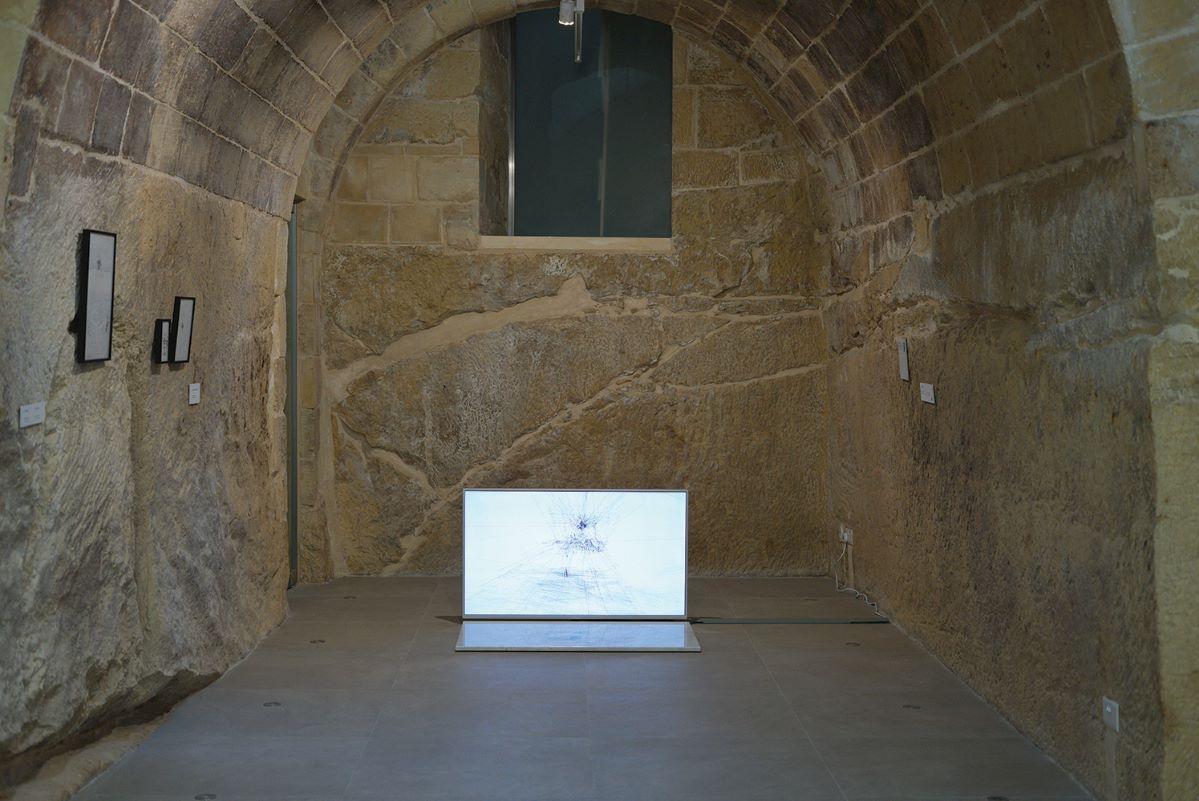 In his work Pjazza, Attard examines the notion of perspective by confronting the buildings of the Auberge de Castille and St James Cavalier while standing in the square between them.

“Since so many drawings were set at this square, the intention was to recreate this in the exhibition space. The installation shows me looking between Castille and St James Cavalier, amassing many layers of gazes through the eye-tracker, through which an animation was created.

“The animation shows an overlaying of perspectives – when I look straight at the administrative building, this comes into focus while the cultural building dissolves, and vice versa. There is this constant play of who is leading whom.

“Being a representation of these two buildings in this pjazza, we asked artists to add monuments to it based on their previous works. Here we took advantage of the fact that we are playing in the world of art so we can say things not necessarily with justification. In this exhibition, nothing is literal, but many things are suggested.”

Some eye drawings depict items hovering between the mundane and the serious, such as those of Attard’s passport or the landscape from Mdina showing the new Quad Business Centre towers being built in Mrieħel.

“Some things are quite on the nose, but it depends on your background and you end up interpreting things in a very different manner depending on who you are,” he said.

One of the more serious themes explored through this body of work was the idea of using the eye tracker as a witness. This was explored poignantly in a work created on the site where Lassana Cisse was killed in a racially motivated drive-by shooting in Ħal Far. 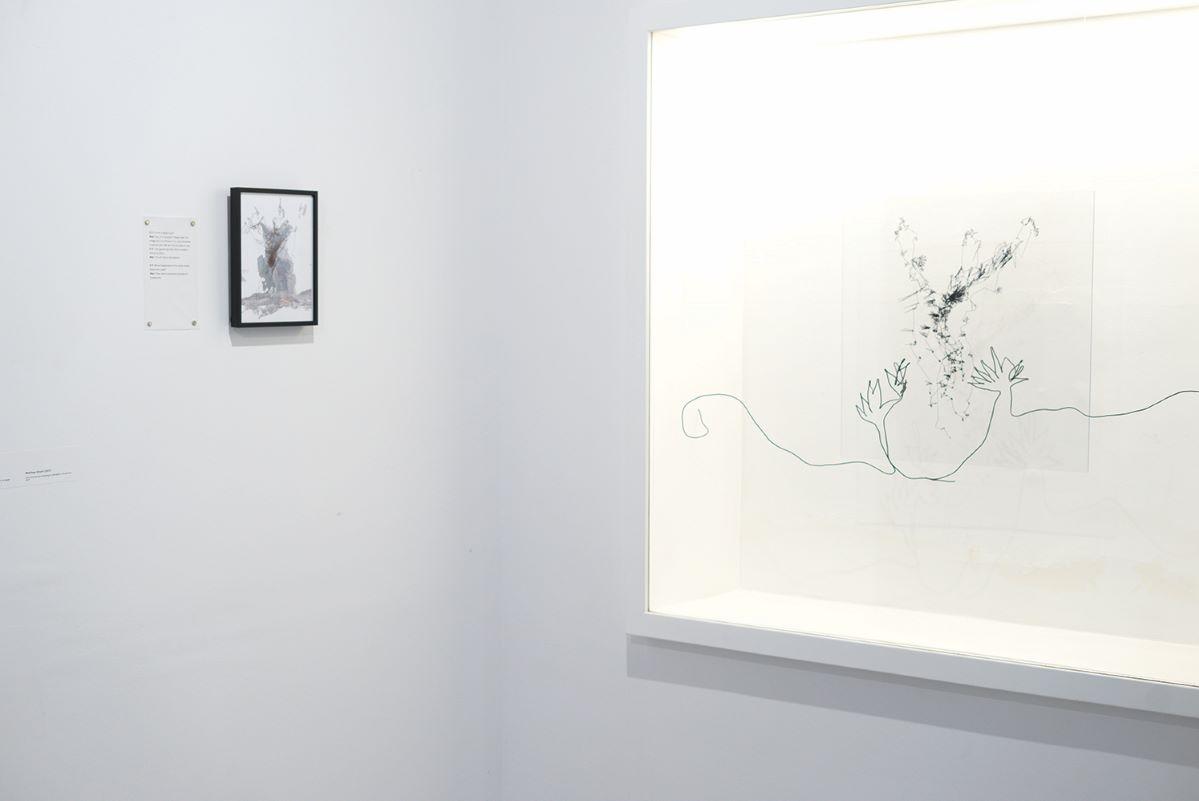 “The drawing was created from looking at Cisse’s memorial at the site of his murder while wearing the eye-tracker. I reflected the data gathered as a drawing on a piece of marble because a marble plaque is all that is left from that event. The work is intended to make us reflect – we saw and keep on seeing such events around us and what are we doing about it?”

Other works explore Malta’s environmental context with specific reference to trees, especially those which are ill fated. An eye drawing of The Jesus Tree in Rabat is shown in a somewhat absurd light, confronting the viewer with the fact that this dead tree is revered and glorified while the rows of live trees around it were chopped down in a road widening exercise.

“The more you look at something with the eye-tracker, the more it cancels out because of the amassment of layers of data. In fact, this dead tree is glorified but the other trees in the street are dead.”

Another tree drawn by Attard is the pattern denoting the Tree of Life in the Ħal Saflieni Hypogeum.

“Heritage Malta gave me permission to draw the Tree of Life with the eye-tracker, after which the data of the geometry I looked at was pen plotted and displayed through computer generated morphing as well. 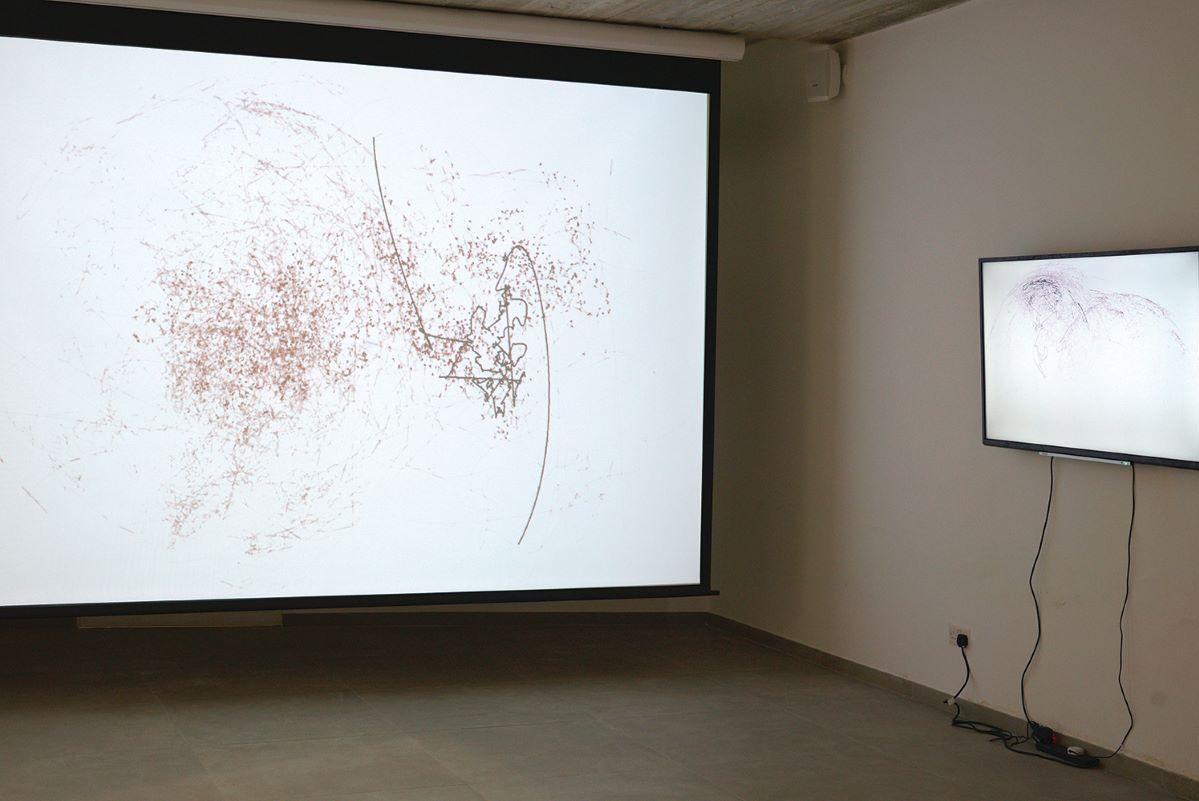 “Here we see the same data but displayed from different viewpoints and showing different details. This pattern is theorised to be possibly one of the first doodles. While using this contemporary device for drawings, I am also going back to the intuition of leaving a trace.”

Throughout the exhibition there is a play of attention bet­ween the mundane and the serious, where the foundational element is the distinction bet­ween looking and seeing. Attard maintains that his works are concerned with subverting the scientific machine for that reason.

“While science is interested in looking, it is more interested in measuring what it sees. I am somewhere in between these two attitudes.”

The issue of choice is also central to the exhibition where every­thing ranging from what one looks at to the medium on which it is shown is somehow selected and curated. This in turn ties into the idea of perception, which is itself very much conditioned, whether by the media, our backgrounds and a whole host of external and internal forces. Given all this, then, how guilty are we for not speaking? Does the blame for our silence lie entirely with us?

“We need to acknowledge the culture of silence we have,” said Attard. “But the exhibition is not a direct comment. You need to start from the acknowledgement. We need to take a good look at ourselves and each other.”

rajt ma rajtx... naf li rajt was curated by Elyse Tonna and is supported by Doneo Co. Ltd and the Edinburgh College of Art where Matthew Attard is currently reading for a PhD funded by Malta Arts Scholarship scheme. The exhibition is showing at Valletta Contemporary until November 13.