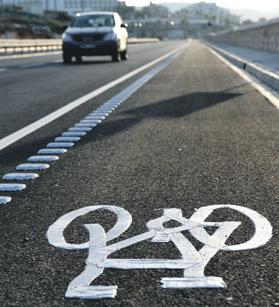 Cyclists are calling for new laws that would hold drivers automatically responsible for accidents involving bicycle users or pedestrians unless they can prove their innocence.

Following another high-profile biking accident earlier this week, the Bicycle Advocacy Group is also pushing for a minimum passing distance that would prevent motorists from overtaking cyclists in tight situations.

“If the government is serious about encouraging people onto bicycles as a way of reversing congestion, parking overload and pollution, it needs to make cycling a much safer activity and start to prioritise people on bicycles,” group spokesman Jim Wightman said.

A minority of cars and trucks squeezing past, simply because they are in a hurry, is no longer an acceptable excuse for either incompetent driving or a lack of good driving manners

Safety on the road is in the spotlight again after seasoned cyclist Hilary Galea Lauri suffered a fractured elbow when he was hit from behind by a car in Msida on Monday, just months after cycling the length of Britain without incident.

The incident comes a month after a 61-year-old man reported to the police he was flung 20 metres from his bike after being clipped by a motorist, breaking his collar bone. The police refused his version of events, insisting he must have hit a wall.

Malta is one of only five EU countries, alongside Cyprus, the UK, Romania and Ireland, not to have adopted the “presumed liability” system which the advocacy group is insisting on.

In Germany, for example, vehicle owners are held liable for any damage caused by their operation unless the driver can prove that the accident was caused by unforeseeable circumstances.

Germany is also one of a number of EU countries with minimum passing distance laws, requiring motorists to be at least 1.5 metres away from cyclists when overtaking.

“A minority of cars and trucks squeezing past, simply because they are in a hurry, is no longer an acceptable excuse for either incompetent driving or a lack of good driving manners,” Mr Wightman said.

The group has already discussed its proposals with the Justice Ministry and Transport Malta but no progress has been reported so far.

When contacted, a Transport Malta spokesman said the regulator was researching a National Cycling Strategy and studying in depth different practices used in other countries.

“We will be involving and consulting with the Bicycle Advocacy Group, the Cycling Federation and other stakeholders,” the spokesman said. “We want to capitalise on their knowledge to be at the forefront of emerging technologies and good practices.”

Lifecycle founder Alan Curry, who has cycled in many of the countries that have introduced the proposed measures, told the Times of Malta that while he felt much safer there than in Malta, the main difference was the respect afforded by motorists.

“What we need is a widespread road safety campaign,” he said. “People need to have some consideration and awareness of cyclists’ needs.

“Tooting horns or getting too close when passing cyclists can cause a big danger.”