The hovering drone emits a mechanical buzz reminiscent of a wasp and shouts down instructions in a tinny voice.

"Attention! You are in a prohibited area. Get out immediately," commands the drone, about the size of a loaf of bread.

A heat sensor takes the offender's temperature and sends the information to a drone operator, who stares at a thermal map on his hand-held screen - shining orange and purple blobs.

"Violations of the regulations result in administrative and criminal penalties," the drone says.

Italy's coronavirus epicentre in the northern province of Bergamo, in Lombardy region, has had enough of people spreading COVID-19.

"Once a person's temperature is read by the drone, you must still stop that person and measure their temperature with a normal thermometer," Matteo Copia, police commander in Treviolo, near Bergamo, told AFP.

"But drones are useful for controlling the territory." 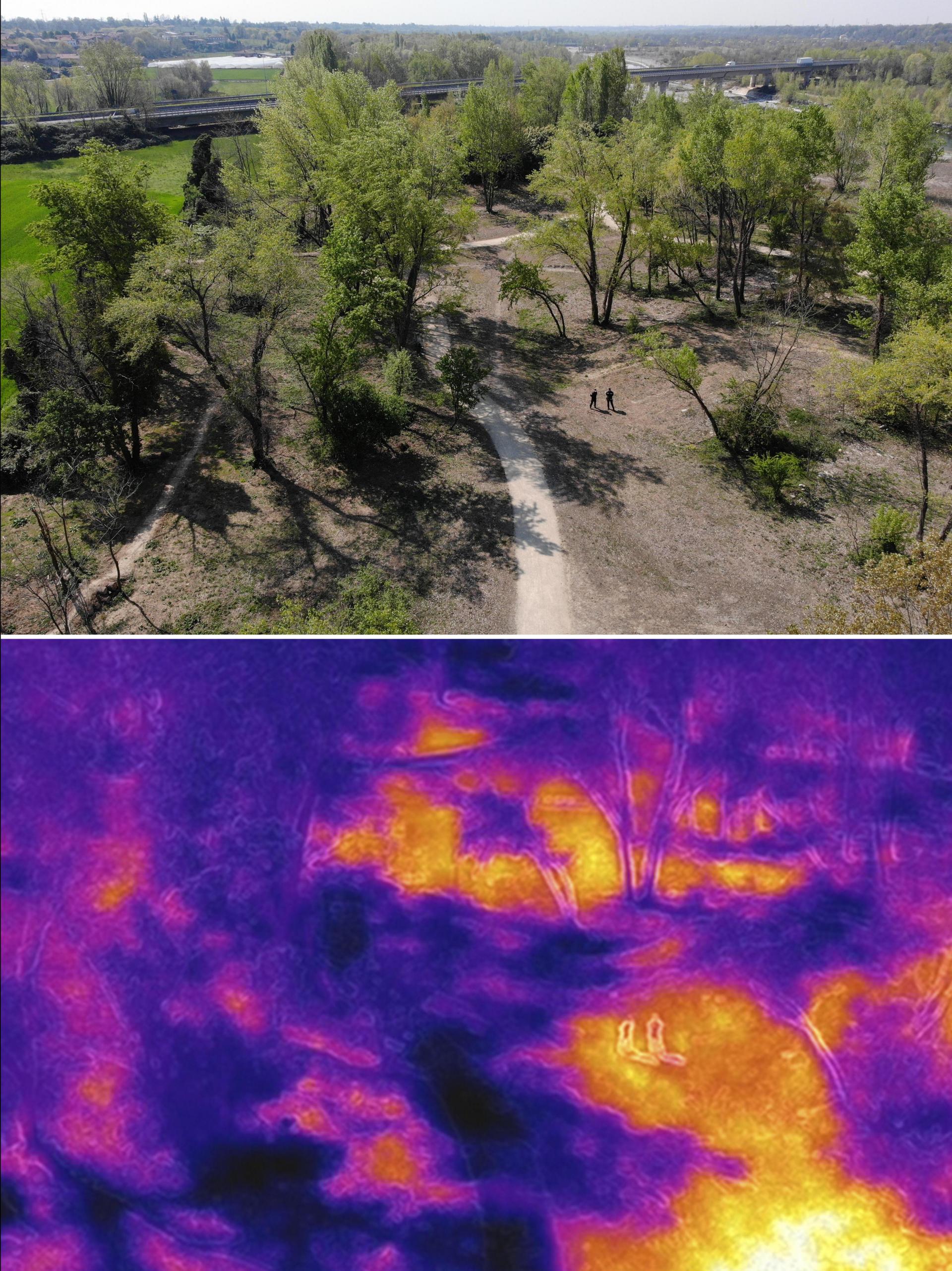 A photo taken on April 9, 2020 and handout on April 10, 2020 by the Treviolo municipal police shows an aerial image taken by a DJI Mavic 2 Enterprise drone equipped with a thermal sensor. AFP PHOTO/TREVIOLO MUNICIPAL POLICE/HO

Italy was the first Western democracy to enter a national lockdown in the face of a disease that has officially killed more than 18,000 in the Mediterranean country and nearly 100,000 worldwide.

It is now one of several European nations using police drones to an extent that would have seemed unimaginable - and almost certainly unacceptable - just a month ago.

In Italy, they try to figure out who has COVID-19.

The official death toll in Lombardy, an industrial area of 10 million people, stood at 10,022 early on Friday - meaning one in 1,000 people have died of the disease in a matter of weeks.

The death toll appears to have peaked and the number of new daily infections is dropping to a point where Italy might soon start seeing the number of formally registered COVID-19 cases decline.

But health officials fear this progress may be undone once people have had enough of life under lockdown and start coming out into the spring sunshine.

Copia says the local police force has received new powers that allow it to check people's temperature without their knowledge or permission.

"Everything is perfectly legal," the police commander said.

"At this moment of emergency, the Italian civil aviation authority has authorised us to control people using critical and non-critical operations.

The government in Rome is reportedly ready to let residents leave their homes for the first time in nearly two months on May 4.

But the most heavily hit regions might choose to extend their lockdowns and the Bergamo drones may keep flying well into the summer months.

Some Italians have had enough of the buzzing machines and their heat maps.

"The use of drones might seem positive but in my opinion, it's a privacy violation," local student Carlotta Locatelli said.

"I think it's good that they are using drones," the pensioner said.

"At least we know who is infected and who is not."