Rokku Bonnici, the 85-year-old fishing enthusiast who drowned in Wied iż-Żurrieq on Tuesday morning, had saved someone from that ill-fated spot not so long ago.

Friends of the late Mr Bonnici told Times of Malta how back in December 2016, he had used his trusty fishing rod to pluck a 59-year-old out of the sea after he had also been dragged in by waves.

Joseph Calleja, who like Mr Bonnici is from Żurrieq, had been dragged into the sea by a swell and says he would have certainly died.

He had been trying to get some fresh sea air to clear away his December cold, and was terrified when a wave pulled him in as he has no idea how to swim.

In acknowledgement of his heroic deed, the late Mr Bonnici was given an award, Ġieħ iż-Żurrieq, only last June.

Eye witnesses of Tuesday morning’s incident said the sea was particularly rough and it was no surprise that Mr Bonnici had not survived.

“Hobbyist fishermen love this spot – there is good fishing to be had here, but they are taking a risk when it is rough,” one fisherman from the area said, as he pointed to the jutting out piece of rock where Mr Bonnici had been fishing. 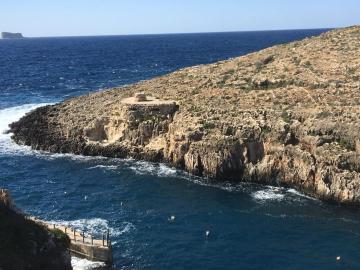 The area where Mr Bonnici drowned

Mr Bonnici, known to his friends as Rokku ta’ Bastjan, would fish for bogue (vopi) and other small catches, using a rod and a traditional nassa – a fisherman’s trap.

The police were alerted at 6.45am this morning that Mr Bonnici was in the sea and an Armed Forces of Malta helicopter was dispatched to the site. He was dead when the rescue team arrived.

One local fisherman said “at least he died doing something we all know he loved, in a place he felt at home”.