An illustration in a new book sheds fresh light on the age of the Dwejra Azure Window, setting its birth date almost 50 years before what was previously thought.

Questions about the iconic landmark’s age arose soon after its sudden collapse in March 2017, with many positing theories as to just how old it actually was.

Photographer Daniel Cilia had told Times of Malta the window could be around 140 years old. He had noted that an 1866 journal entry by Edward Lear did not mention the Azure Window but featured in an album by photographer Richard Ellis dated 1879.

An 1854 illustration of Dwejra found in a book by Thomas Spratt about the geology of Malta and Gozo also showed no opening in the cliffs, Mr Cilia noted.

As the social media reacted to Mr Cilia’s comments, an illustration that attempted to dispute the 140-year theory soon emerged.

An 1824 aquarelle of Dwejra Tower, published in The Coastal Fortifications of Gozo and Comino by Alfred Sammut-Tagliaferro showed the window in the background.

Still, it was unclear whether it was an archway or a cave.

A pencil drawing in a newly-published book by Patrick Formosa, illustrated by Mr Cilia himself, indicates that the Gozitan landmark was at least 187 years old when it collapsed.

Read: Azure Window 'face' was there all along

The drawing by Lt Col. Richard Irton was dated 1830 and illustrations of other landmarks contained in the same album could be easily dated to 1830, confirming the pencil drawings’ origins, Mr Cilia said. 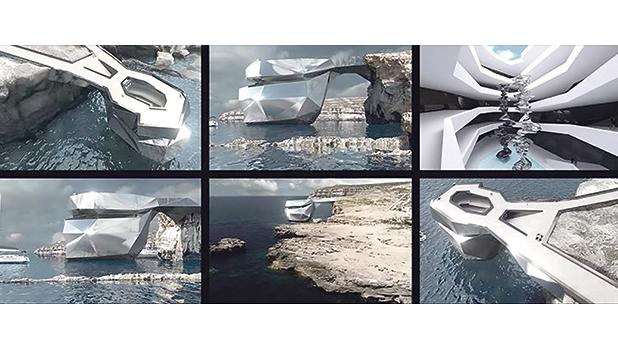 Architect Svetozar Andreev’s proposal called ‘The heart of Malta’, a polygonal structure made up of mirrored steel faces.

Once it collapsed, the window continued to capture the attention of several, including artists and engineers who reimagined the structure in some new form.

Among others, architect Svetozar Andreev has recently launched a proposal called ‘The heart of Malta’, a polygonal architectural structure made up of mirrored steel faces.

The structure would have the same size and proportions of the original limestone arch and, according to Mr Andreev’s Russian architectural firm, it would blend with the landscape. The proposal includes over 5,000 square metres of exhibition space laid out over five spiral floors, with a dynamic laser show in which each spiral step represents 1,000 years of Maltese history.

When the window collapsed, the government had launched an international initiative inviting people to submit ideas such as Mr Andreev’s artistic installation and artificial recreation.

According to news portal Newsbook, the government received just one proposal by a Gozitan developer to build a hotel and heritage park in the area.