In medieval times the city of Vittoriosa, being less insular than the rest of the island, witnessed the influx of ethnic mixture with the presence of Genoese, Venetian and Greek sea­farers and merchants, who all in­troduced their traditions, costumes and folklore, particularly during Holy Week and Easter cele­brations. These important events in the Christian calendar have lingered on in Vittoriosa till the present day. Understandably, the arrival of the Order of the Knights of St John in 1530 ushered in the most glorious period of this city because it was in Vittoriosa that the greatest Christian institution at that time saw its finest hour.

These historical landmarks left their deep imprint on Vittoriosa’s forefathers, evolving into deep-rooted traditions as manifested on Good Friday and Easter Sunday that justify the assertion that feasts and festivities in this walled city are celebrated with unbridled passion and unusual dedication.

Even today, in this unique rich historical milieu, authentic traditions and legends flourish in great abundance in spite of the social upheaval in post-war Malta and the ageing population. The Vittoriosa revival has projected a new generation imbibed by the spirit of their forefathers, strongly determined to preserve and promote these traditions, culminating in the brilliance of Easter Sunday.

In preparation for the rigidity of Lent, the 40 days of fasting and abstinence strictly observed until the pre-war years, Vittoriosa citizens in 1535 gave Malta its first carnival, celebrating it in a particular place known as Il-Ballett, when the locals and the knights, all masked, danced and frolicked with great abandon. Later on, Grand Master Jean de Valette, a bon vivant, continued this tradition with gusto. Not sur­pri­singly the city band La Vittoriosa was the first musical institution to participate in the Valletta carnival in 1860 with a company in costume called La Zingarelli.

The presence of the Inquisitor from 1562 to 1798 in the centre of the city compelled Vittoriosa citi­zens to observe all the strictures of Lent or they could be forcibly dragged to the Inquisitor to face the consequences. Even in later years the populace was still intimidated by stories of torture that persisted until the diaspora of the last war. In these circum­stances the arrival of Easter was a time of great relief and jubilation.

The proliferation of churches on the Vittoriosa peninsula in med­ieval times earned the city the well-deserved title of Ras il-Knejjes (Headland of churches). Besides San Lorenzo a-Mare, the parish and other churches of Latin rites like the church of the Annun­ciation, founded in 1450, and the church of Our Lady of Monsarrat, there were three other churches that served the thriving Greek community, which was already firmly established in this maritime city before the coming of the Knights. 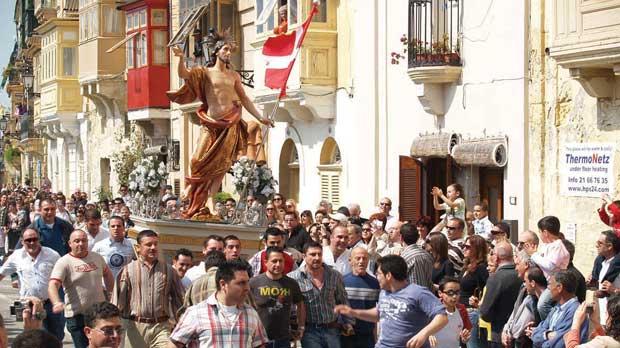 Sturdy young men from the city running with the statue of the Risen Christ, L-Irxoxt, made by sculptor Salvu Psaila in 1833.

Documentary evidence proves that the Rhodians who accom­panied the Order to Vittoriosa were assigned to three different parishes in different parts of the city, namely the chapel dedicated to Our Lady of Damascus (formerly St Catherine’s), another de­di­­cated to St Nicholas in the an­cient Collachio, and the chapel of St George on the processional route opposite the Dominican convent.

Attachment to the special Greek Easter rites, customs, traditions, and perhaps a little nostalgia for their homeland, must have ren­dered Easter Sunday a very special occasion for the lucrative Greek community. Surely medieval Vit­toriosa must have experienced the vibrancy and emotions of the occa­sion as celebrated in traditional Greek churches.

With the influx of affluent Rhodians who accompanied the Knights to Vittoriosa, Easter traditions and devotions were further strengthened, especially as the Knights brought from Rhodes exceptional relics connected with the passion of Jesus Christ, in­cluding a splinter of the original cross on which he was crucified, donated to Grand Master Fra Emeri d’Amboise (1503 -1512 ) by King Louis XII of France (1462-1515) in an exquisite reliquary, as well as a thorn from the crown of thorns and two tiny pieces of purple cloth from Christ’s robe when he was mocked by his tormentors. These relics, vene­rated at the conventual church of St Lawrence on Good Friday, added poignancy to the passion com­memoration and to the great cele­brations on Easter Saturday as soon as the Gloria was intoned.

In the early Knights’ period, episodes from the passion and resurrection of the Lord were added to the Dominican church of il-Lunzjata (the Annunciation), which then served as the Vittoriosa parish and to which Rhodians were especially attached.

In fact, two Rhodian brothers, Girolamo and Antonio Caccia­lepre, built a chapel there at their own expense, dedicated to the Risen Christ, in about 1546, with an effigy of the Risen Christ over the altar, where special Masses were held on Easter Sunday. These events so rich in Easter iconog­raphy provide some insight into the evolution of Easter cele­brations in this maritime city, leaving their imprint on Vitto­riosa’s forefathers and sustained by the younger generations.

In pre-war years, Easter cele­brations in Vittoriosa started very early on Saturday morning when the artistic statue of the Risen Christ (L-Irxoxt) was carried from the waterfront church of Our Lady of Mt Carmel to the parish of St Lawrence. 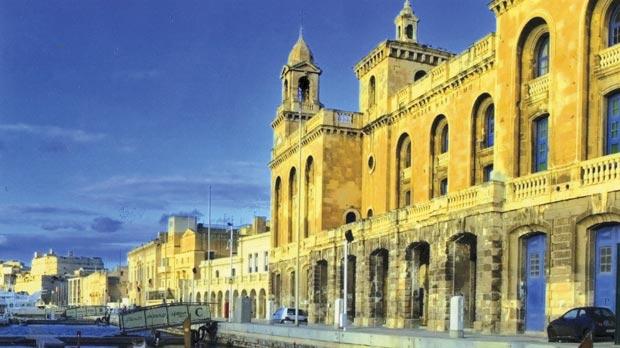 The elegant Marina Grande, now known as the Vittoriosa Waterfront. Parochial rights over the marina caused friction between the parish and Governor Thomas Maitland.

As the joyous pealing of bells in­toned the Gloria it was cus­tomary, indeed it was a rite of passage, for Vit­toriosa youths to jump into the sea at the Jews’ Sally Port (known as it-Toqba l-Qadi­ma), historically the tunnel through which the Piccolo Soc­corso entered Vittoriosa after the fall of St Elmo in the Great Siege. In my youth, the Gloria heralded the swim­ming season and Vittoriosa’s long-standing connections with the sea.

On Easter Sunday morning, Vittoriosa is magnificently en fête as it welcomes its visitors to savour its regeneration after the ravages of the last war, exposing its massive tastefully restored bastions and high cavaliers bedecked with the flags of the ancient auberges and the joyous ringing of bells reverberating in the narrow streets of the famous Collachio.

The special lilting music provided by Soċjetà Mużikali San Lawrenz adds to the merry festive atmosphere as sturdy young men run with the elegant statue of the Risen Christ with children holding high their figolla (a traditional Maltese sweet) chanting “Kristu Rxoxta Berikili; Ħudli biċċa u ħallijieli” (Risen Christ bless my figolla. Take a piece and leave the rest for me). The statue of l-Irxoxt is the rallying point for all young Vittoriosa sportsmen, myself in­cluded 70 years ago, to parti­ci­pate in the most ardous run with the statue up the steep incline leading to the medieval piazza. 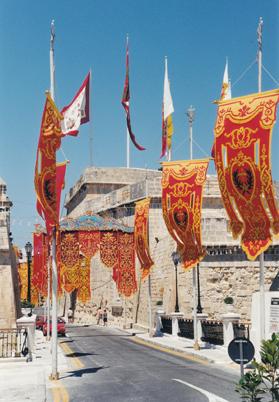 On Easter Sunday morning, the medieval city is magnificently en fête, exposing its massive, tastefully restored bastions and high cavaliers bedecked with the flags of the ancient auberges.

Until the mid-1960s a drummer accompanied by a piper used to parade along the historic streets on Easter Sunday afternoon, and like the legendary Pied Piper of Hame­lin, he was followed by hundreds of children chanting this tune:

Even this quatrain is loaded with historical connotations when refe­rence is made to the flag of the Risen Christ. In his diary during the early British period, Canon Lorenzo Lanzon states: “Temendo dis­pia­cere all’ attuale governo Inglese gli si fece in mano una palma” (In order not to hurt the feelings of the English government they placed a palm in its hand).

Lanzon was referring to the statue of Vittoriosa’s Risen Christ, which in the times of the Knights carried the flag of religion, namely a red flag with a white cross, which was re­placed by a silver palm out of de­­ference to the British.

But this decision was soon over­turned when Governor Thomas Maitland de­prived Vitto­riosa parish of paro­chial rights over the elegant Marina Gran­de, now known by the un­happy title of the Vittoriosa Waterfront.

It was also evident that Vittoriosa was proud of its close connection with the Order of St John when the Knights and the city’s populace were the pride of Europe 450 years ago during the epic siege of 1565.

The historical city of Vittoriosa beckons, and its hospitable com­munity invites visitors on Easter Sunday to share in their joyous festivities redolent with history, folklore and tradition.