Fr Anġ Seychell has appealed to politicians from the southeastern districts to oppose a planned agritourism project for the pristine Munxar cliffs in Marsascala.

The Żejtun priest, better known as Dun Anġ, who fronted opposition to a hotel project proposed for the area 20 years ago, said the site should be left in its natural state to be enjoyed by everyone. 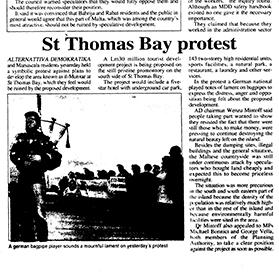 How the Times of Malta reported a protest organised by Alternattiva Demokratika at St Thomas Bay in 1996 against a proposed hotel development at Munxar.

Developer Rennie Scicluna, a registered farmer who owns a large tract of land at Munxar, wants to build accommodation, a beach club, a restaurant and a fully-equipped conference centre.

“I hope that politicians from all the southeastern districts voice their opposition to this project and insist that Munxar should remain as it is in its natural state,” Fr Seychell said yesterday when contacted.

The planning authority last February said that the permit would be tough to acquire because the development went against its rural policy and lay within a scenic rural location of ecological importance.

But the door was left ajar, and the developer was asked to carry out an environmental impact assessment.

Our appeal back then was to leave Munxar in its natural beauty,and that still applies today

News of the planned project rekindled memories of the mega project proposed for the area in 1995 by an Italian developer who wanted to build a five-star hotel and 143 residential units.

Fr Seychell said the arguments made during the campaign 20 years ago to preserve Munxar were still valid, because the area was untouched by development and still had fields that were cultivated.

“Our appeal back then was to leave Munxar in its natural beauty, and that still applies today,” Fr Seychell said.

Two decades ago the priest and several of his friends collected 11,000 signatures on a petition against the project and also produced a postcard campaign, asking people to send them to the planning authority.

“The project at the time was pushed by an Italian investor, who came to meet me at my house. He had also promised to build a chapel in the area to try and win me over, but I told him we did not need any more chapels,” Fr Seychell said. Eventually, as opposition grew, the Italian investor gave up and the project never came up for consideration in front of the planning board.

“The [agritourism] project should be scrapped today for the same reasons the other project was scrapped… Munxar should be enjoyed by everyone,” he said.

The area, perched atop a stretch of white cliffs, is popular with people in the area for walking all the way from St Thomas Bay to Xrobb l-Għaġin and Delimara.

Several environmental and social groups, including the Marsascala council, have come out against the project.