A former Pilatus Bank employee who has been the source of claims concerning the bank and its ties to the Prime Minister's wife today testified before an inquiry looking into the allegations, Daphne Caruana Galizia has said. 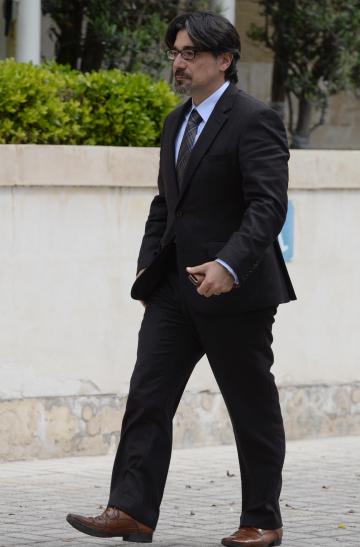 Magistrate Aaron Bugeja is leading an inquiry into the claims. Photo: Matthew Mirabelli

In a blog post uploaded shortly after 6.30pm, Ms Caruana Galizia said that the former bank employee appeared before the inquiring magistrate at 3pm this afternoon.

"She spent three hours with the inquiring magistrate, and left court shortly after 6pm," Ms Caruna Galizia wrote. "I am reporting this fact with her permission."

Ms Caruana Galizia said that the woman "has been the source of most of this website’s reports about the activities of [Pilatus] bank and its clients, including the documents related to Egrant Inc and Michelle Muscat."

Those reports have included allegations that the Prime Minister's wife Michelle is the ultimate beneficial owner of Panama company Egrant, that the company received payments of more than US$1 million and that Pilatus Bank counts several Politically Exposed Persons among its clients, including members of Azerbaijan's notorious Aliyev ruling family.

Ms Caruana Galizia told the Times of Malta that she had no idea what was said, as witnesses were precluded from sharing information on the testimony given.

She said the woman had gone to give her evidence in Valletta of her own free will, as she had not revealed her identity when she testified before the magistrate on Thursday.

“She never intended on giving evidence in court… I speak to her every day, and I know she has been following the denials and the clouds of confusion being kicked up,” Ms Caruana Galizia said.

An inquiry into claims concerning Dr Muscat's wife was opened last week and is being led by inquiring magistrate Aaron Bugeja.

Dr Muscat and his wife have denied the claims and filed libel suits against Ms Caruana Galizia.

On Thursday, Opposition leader Simon Busuttil also appeared before the magistrate to present “irrefutable evidence” that he said proved that the Prime Minister’s chief of staff, Keith Schembri, had received kickbacks from the sale of Maltese passports through the Individual Investor Programme.

Mr Schembri has denied the claims.

In a brief statement issued by his office, the Prime Minister expressed his satisfaction that "the so-called whistleblower" had testified before the inquiry.

"The Prime Minister hopes this will lead to the whole truth being revealed about the lies being told about him and his family," the OPM statement added.

The Nationalist Party also chimed in, saying that now that the whistleblower had testified, it was time for Dr Muscat to step aside.

"This latest development... continues to shred every last bit of credibility that Joseph Muscat might have had left," the PN said.