Pyramids, Tutankhamun masks, Nefertiti busts – Egypt’s souvenir-makers are pinning their hopes on a new lease of economic life, after tourism was battered by the coronavirus pandemic.

In the shadow of the magnificent Giza Pyramids, Eid Yousri manufactures polyester Pharaonic figurines from a humble workshop erected on the roof of his family home.

“We’ve lost nearly 70 per cent of our business,” he told AFP, lamenting the plunge in visitors to one of the seven wonders of the ancient world.

Before the pandemic, “we had about 15 workers – compared to five today,” he said, noting that even the remaining staff were not full-time.

Hundreds of small business owners and artisans have been forced to mothball much of their activity, choked by cancelled flights and movement restrictions around the world. 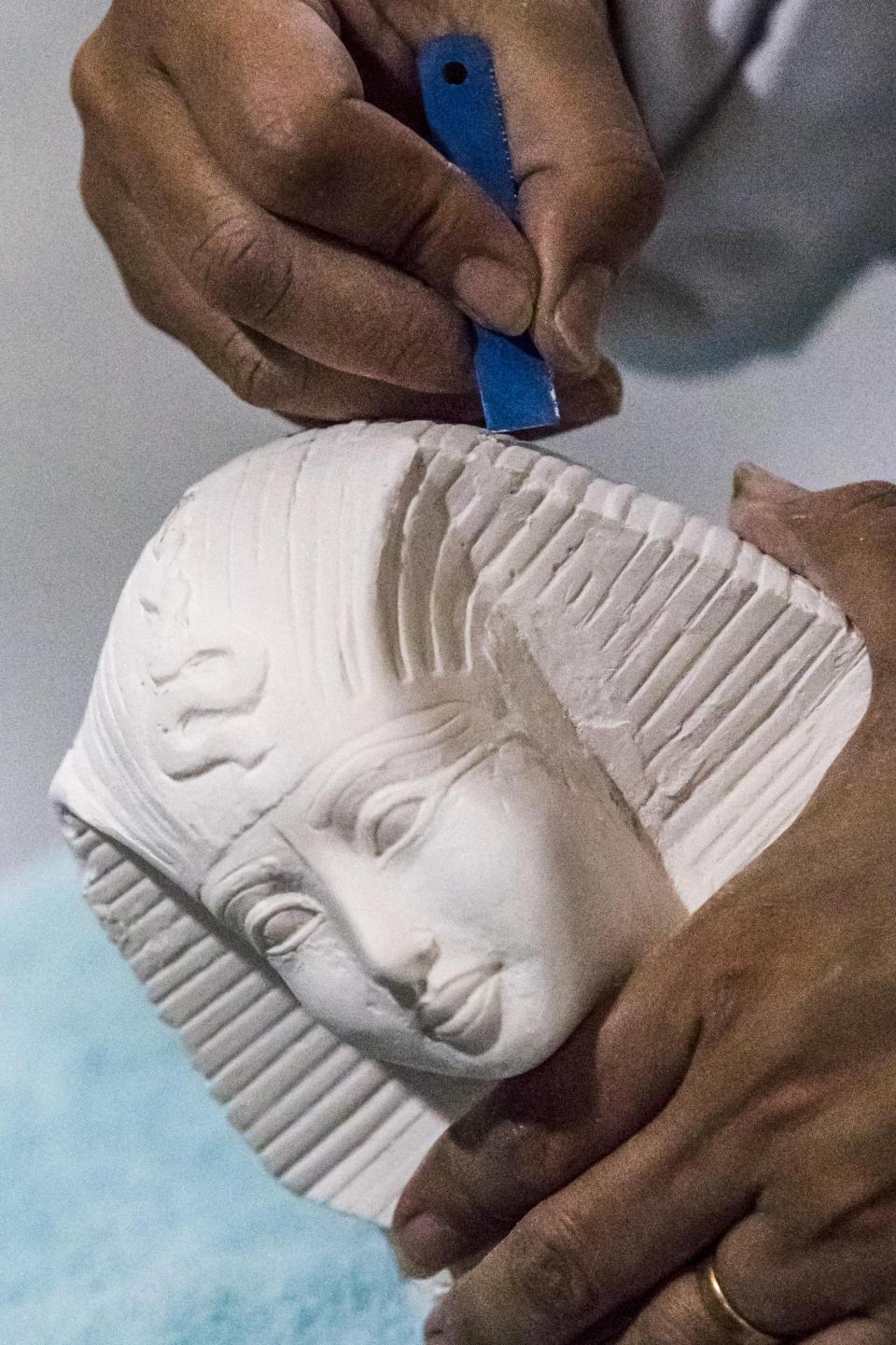 A technician crafts a replica of an Ancient Egyptian statue being fabricated at the Egyptian government’s Konouz (Treasures) factory reproducing replicas of Ancient Egyptian items, at el-Obour city, east of the capital Cairo on May 17, 2021.

Hundreds of small business owners and artisans have been forced to mothball much of their activity, choked by cancelled flights and movement restrictions around the world.

Yousri hopes that foreign tourists are lured back to Egypt in the latter part of the year, “especially Americans”, with some groups from the US expected in September.

In 2019, the last full year before the pandemic struck, tourism made up about 12 per cent of Egypt’s GDP.

After a long period of political instability dented earnings, revenues from the sector reached $13 billion that year.

But in 2020, a year when Egypt had initially eyed a further rebound to $16 billion, takings collapsed to $4 billion.

Around 500,000 have flown in monthly since April this year, more than double the number in January and up from an average of just 200,000 tourists per month in 2020.

On the other side of town, in the narrow and labyrinthine alleys of Khan el-Khalili in Islamic Cairo, tourist Caroline Bucher is on the hunt for “locally made” products to bring back home to her native Dominican Republic.

“We’re looking for handmade and quality souvenirs, that are about local culture,” she told AFP. “It has to be a memory of the trip.”

In a souvenir market that was for many years flooded by cheap Chinese imports, the government is seeking to meet demand for quality products sought out by tourists like Bucher.

On the eastern outskirts of Cairo, a new antique reproduction factory has since March been preparing to capitalise on the much hoped for post-pandemic era.

Items at Konouz range from a small amulet selling for 50 Egyptian pounds to a three-metre statue setting back customers thousands of pounds. 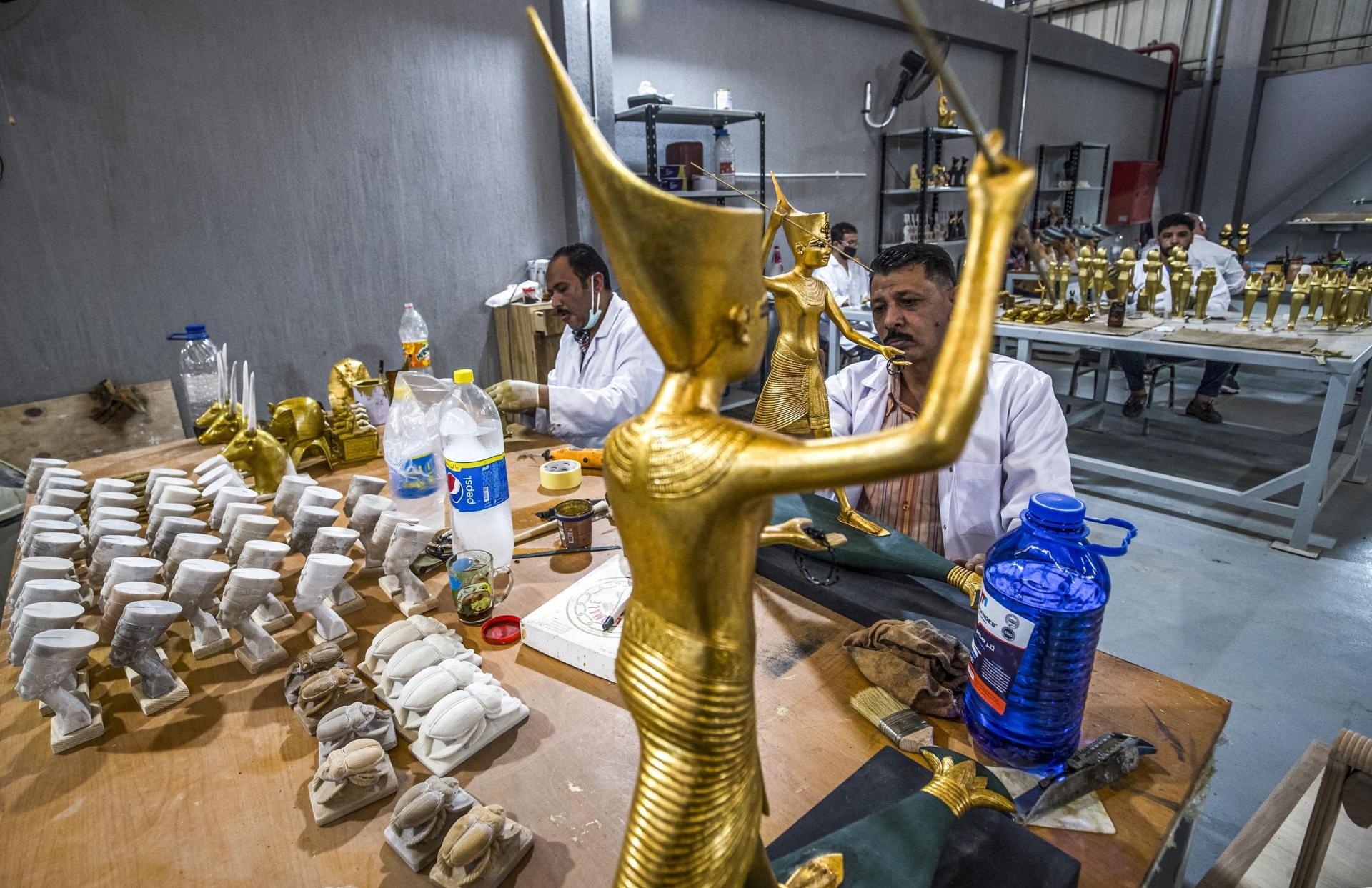 Reproductions, in 1:1 scale or miniaturised, are accompanied by an official government-issued certificate of authenticity.

The vast 10,000-square-metre factory is run by Hisham Sharawi, a retired general, who supervises around 150 workers, painters, cabinetmakers, sculptors and designers.

“We opened a gift shop at the National Museum of Egyptian Civilisation” in April, he told AFP.

Other Konouz gift shops will open at museums and key archaeological sites later on.

“When tourists come back, we will be ready,” pledged Ahmed Aboul Gheir, who is also working on the ‘Made in Egypt’ initiative. 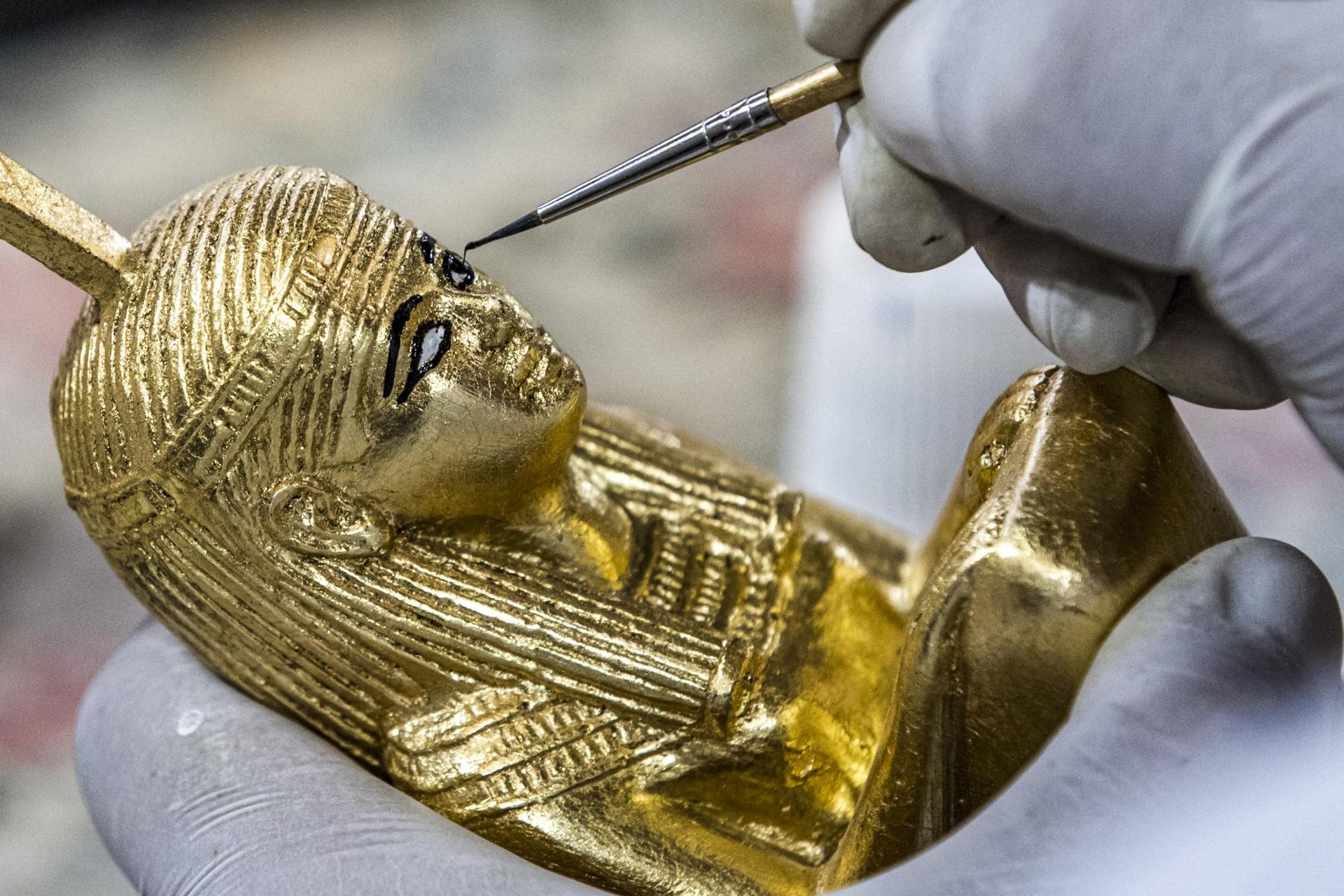 In 2015, the ministry of industry prohibited “the imports of goods and products of a popular art nature”, including “models of Egyptian Antiquities” as a protective measure to safeguard its home-grown crafts industry from cheaper foreign competition.

Most of the factory’s replica objects are cast in polyester, plaster or metal. Specialised machines give a “final touch” to the replicas before they are painted by hand or covered with gold leaf. 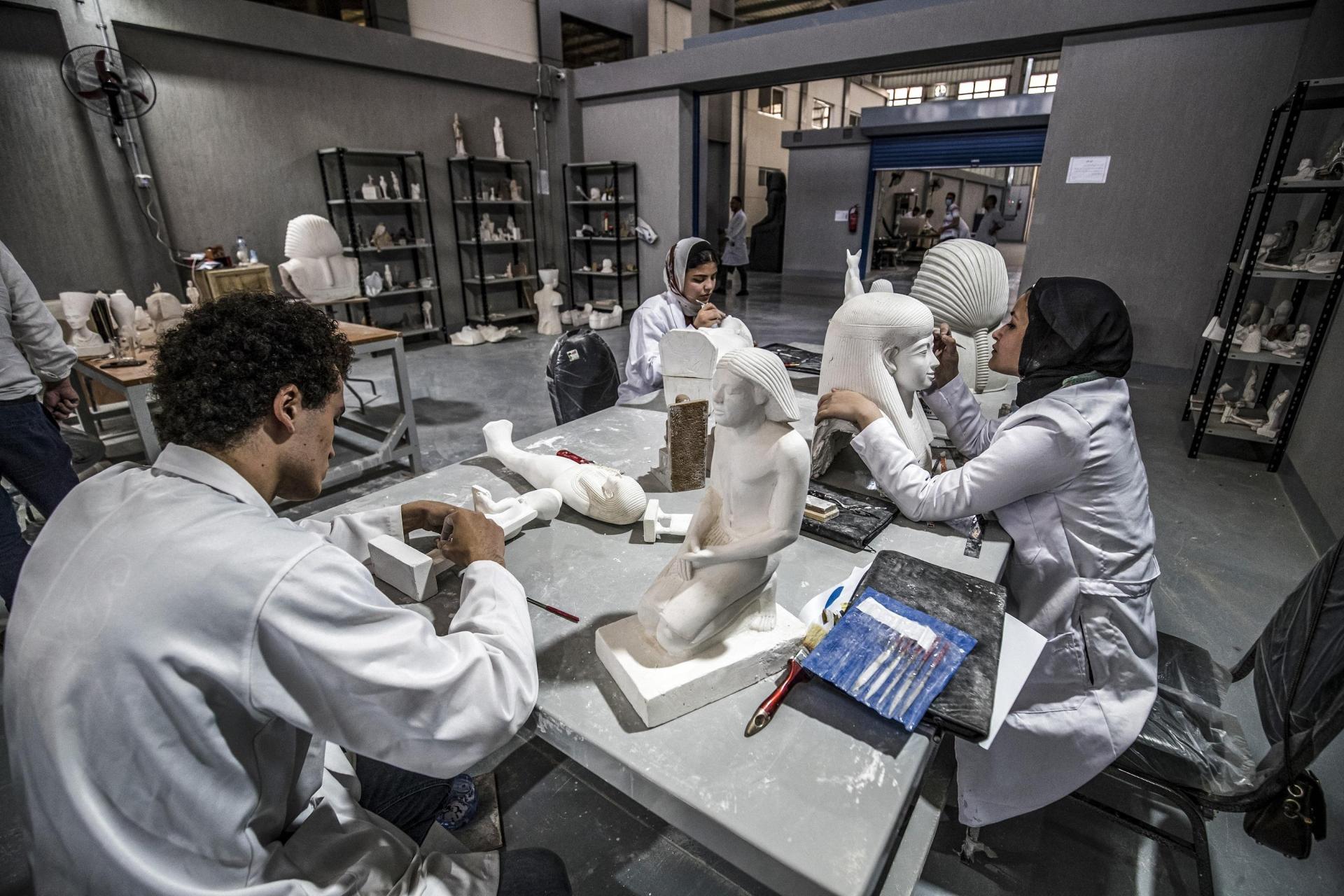 But the cheaper items created under the initiative also risk crowding out local craftsmen who are unable to produce in such high volumes.

Items at Konouz range from a small amulet selling for 50 Egyptian pounds to a three-metre statue setting back customers thousands of pounds.

But he warned against flooding the replica goods market.

“You mustn’t produce too much, otherwise it loses value,” he noted. 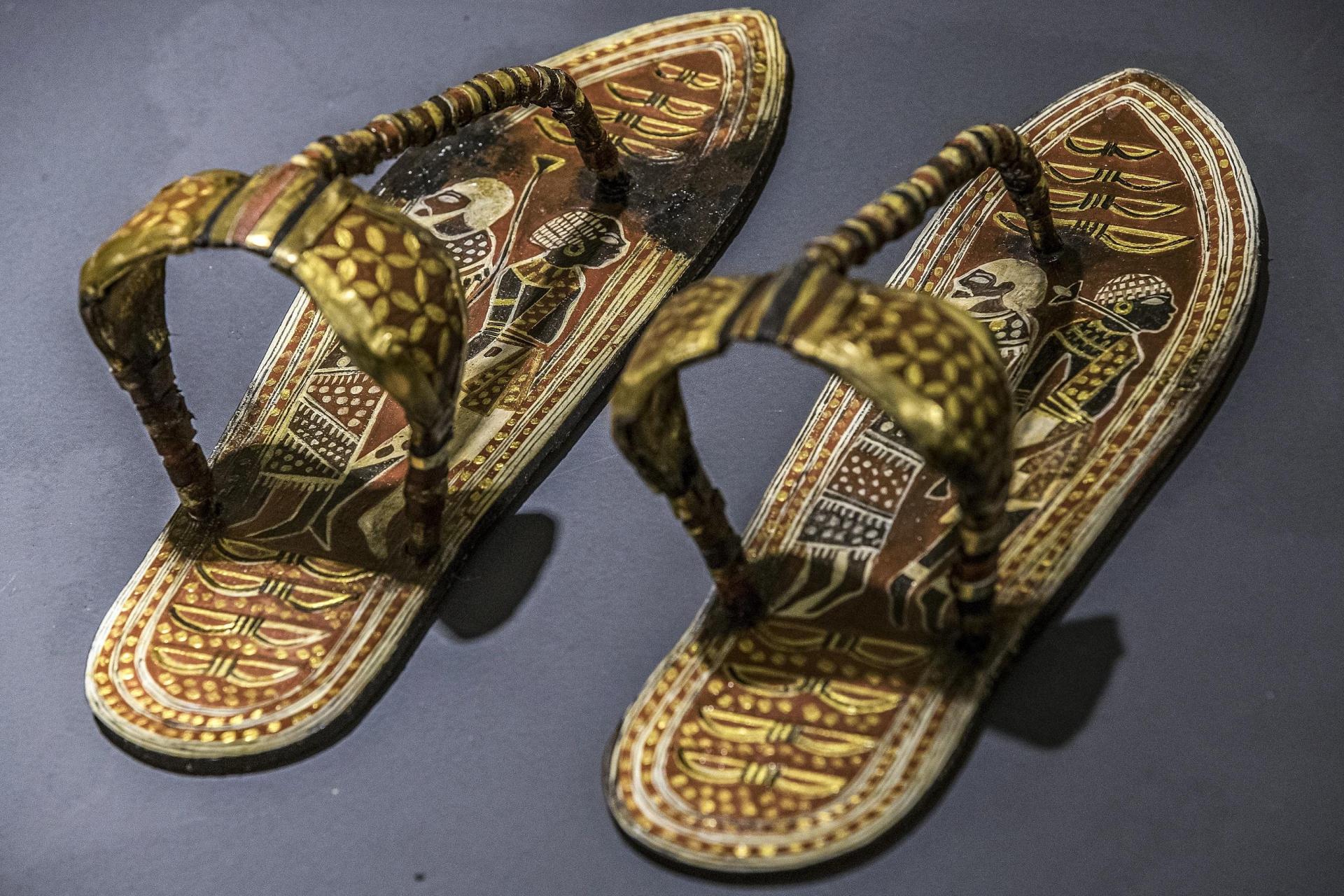 A replica of a sandal found at the tomb of Tutankhamun.