Residents of a small town in El Salvador pelted each other with homemade fireballs last week as the yearly Bolas de Fuego festival got under way.

The festival is a one day event where participants get to pelt each other with rags rolled tightly into balls and drenched in gasoline before getting lit up.

Participants gather every year on this date in the town, located some 30 km north of San Salvador, to commemorate a volcanic eruption in 1658 that forced all of the residents to abandon the town.

According to Reuters, local churches have embraced the tradition with the use of urban legends.

The legend says that the eruption was actually a battle between the local Christian saint, San Jeronimo, and the Devil, with St Jerome using the hot lava that flowed from the volcano to make balls of fire. The fireball hurling is meant to remember the old town which was destroyed in the battle.

As a tribute to the war between good and evil, Nejapa becomes an unregulated battlefield for two warring groups, with faces painted to look like skulls as they throw fireballs at each other while a big crowd cheer them on. 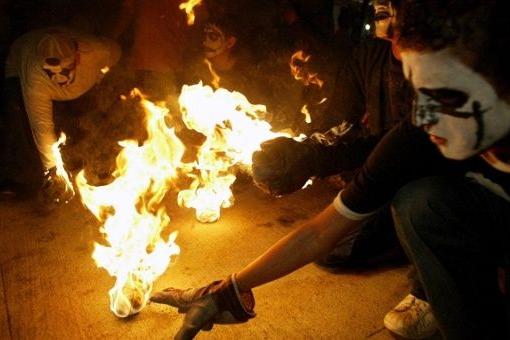 Emergency medics are on hand, police keep order and guests have a chance to hold the balls of fire before and after the fight. A party with music usually follows the fire flinging.

“It’s a tradition which is very ours. The risk is that one. We know the rules of the game. You know you’re going to get burnt but it’s part of the adrenaline, part of the adrenaline to feel the fire. Each one of us, those you see here, is conscious they can get burnt. They can get hurt. It’s a rough game to throw balls of fire and they are thrown hard,” said festival participant, Carlos Diaz to Reuters.

Authorities fear the festival might one day get out of hand because there are no rules, but despite the apparent dangers, few serious injuries have been reported.