As Matthew Guillaumier scored Ħamrun Spartans’ first goal, 16 minutes from the end of Thursday’s match against Bulgarian giants Levski Sofia, Christian Sammut had to stop himself from cheering too loudly.

Standing in a crowd of over 20,000 people, Sammut, Ħamrun’s mayor, was one of the 100 Maltese supporters who stood in the Vivacom Arena Georgi Asparuhov Stadium, in Sofia, Bulgaria, to watch the local team write a new chapter in Maltese football history.

Surrounded by a sea of blue and black - the colour of the opposing team, he watched as his hometown club became the first local team to ever reach the playoff round of a UEFA club competition.

On Thursday night, the team knocked out Levski Sofia, in a penalty shoot-out after winning the match 2-1. Goalkeeper Henry Bonello emerged as the Spartans' hero, as he saved two penalties in the shoot-out to ensure his side became the first Maltese team to progress to the Play-Off round of the UEFA conference.

Ħamrun will face Partizan Belgrade during the play-offs in Serbia on August 18 and in Malta on August  25. 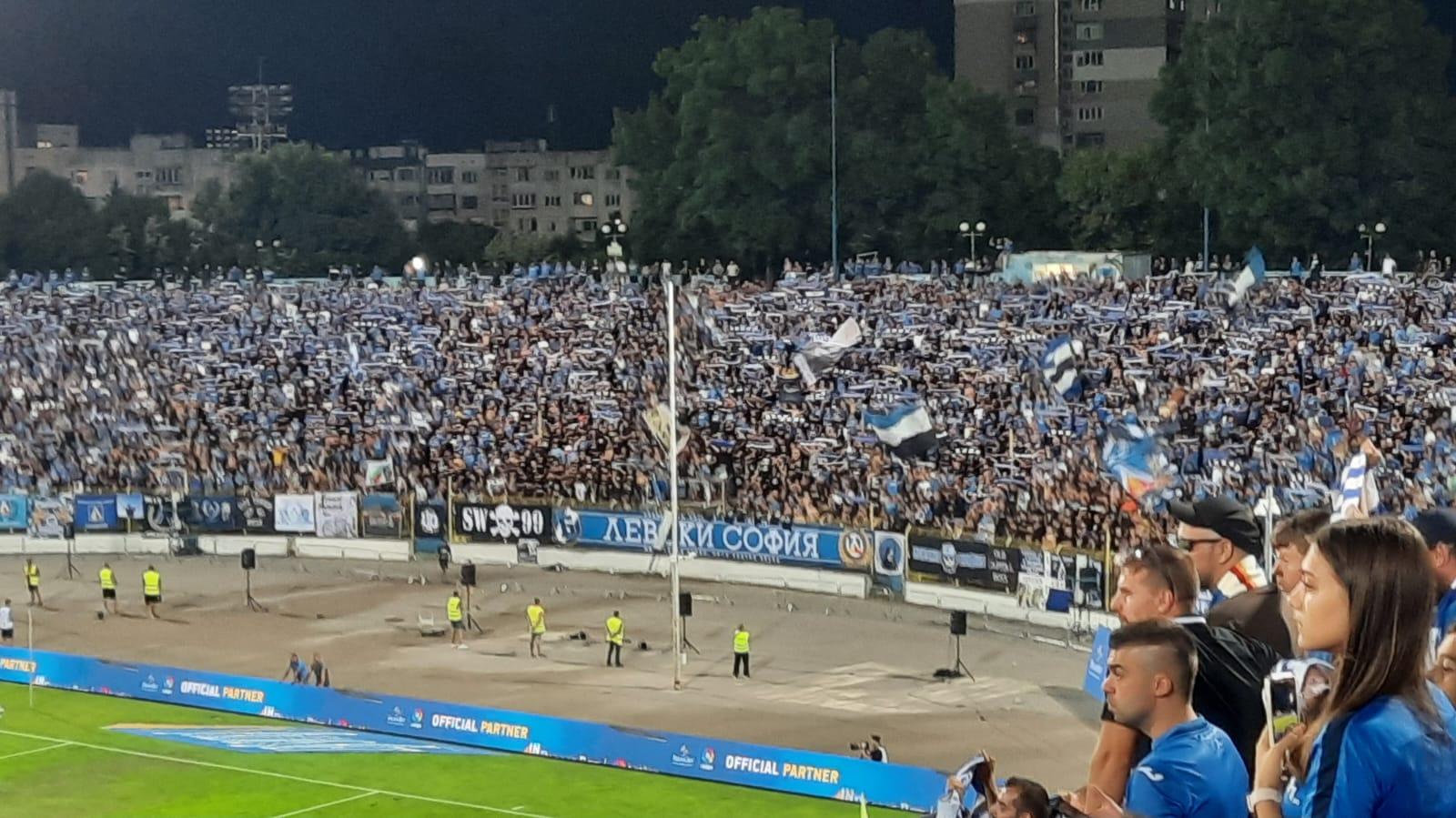 'I thought twice before screaming goal'

The team made a strong comeback after their 0-1 defeat in Ta’Qali last Sunday, beating Levski Sofia in Bulgaria on Thursday night during nail-biting penalties.

“It was incredible: we were in a huge stadium with over 20,000 supporters, the majority of which were supporting the other team,” Sammut told Times of Malta.

“It was a bit surreal; I was in the VIP section among Levski Sofia supporters, and I thought twice before screaming goal.”

Founded in 1907, Ħamrun Spartans are an established team with a long unique history. This includes scoring eight national league titles, with the first Championship going back to 1913 - 1914.

It is not the first time the club made a name for itself in European football.

In 1984, it was the first Maltese club to win both home and away legs (vs Ballymena of Northern Ireland).

The club’s history also includes years of struggle and difficulties, when during the 2012-2013 season the team was relegated to the Second Division- the worst ever placing in its history.

Yet, for Ħamrun supporters, last night’s game will go down in history.

“In Ħamrun, football is like religion. For us, it’s all about our feast and football,” Sammut said.

He said it was truly an experience watching the team, as apart from supporting them from day one, he also forms part of the teams committee.

“You are standing there watching your team play against a very strong foreign team, and playing very well and strong, it’s something to be very proud of.”

He added the win was not just a good image for Ħamrun, but also for Malta.

Also among the crowd was 62-year-old Gejtu Vella, former UĦM Voice of the Workers general secretary, who described the night as ‘electrifying’.

“It will certainly be remembered by the Ħamrun supporters for many years to come,” he said. 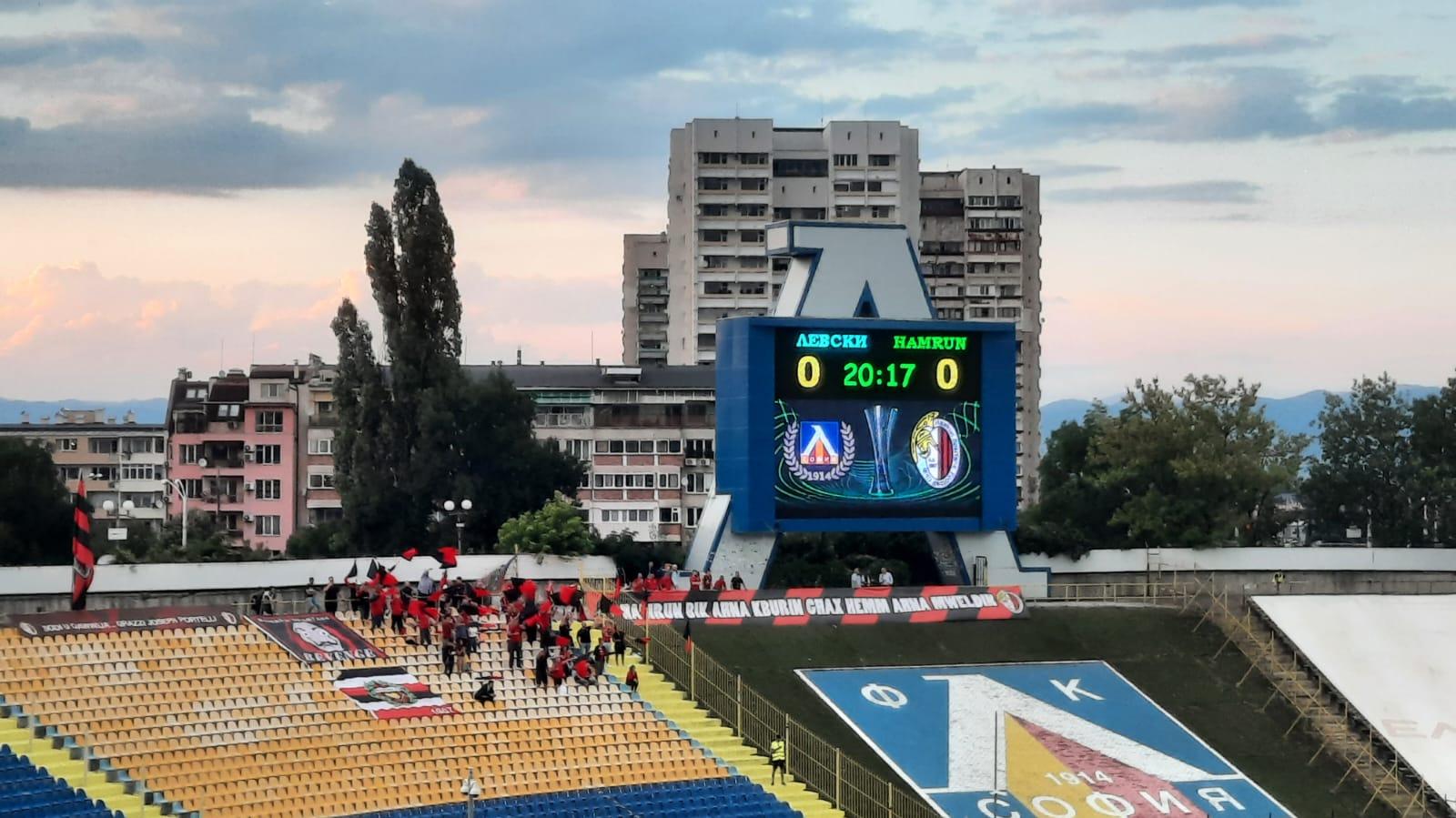 Vella has watched the club grow throughout the years and feels extremely proud. He is now on the club's governing and ethics committee board.

"We came a long way, surpassed our own local competition, and now here we are, making a name on an international level. I take a lot of pride seeing this, it's amazing," he said.

Vella, along with the Spartans team and supporters, arrived back in Malta at 3am on Friday.

"When we arrived there were other supporters waiting for us at the airport, to greet us and celebrate the team's achievement. It was fantastic."

He also echoed Sammut's comments on the importance of football for the Ħamrun community.

"The game is on everyone's lips right now, and what is beautiful is if there was any conflict between friends or family members, everything has been resolved - that is the beauty of the sport: bringing people together." 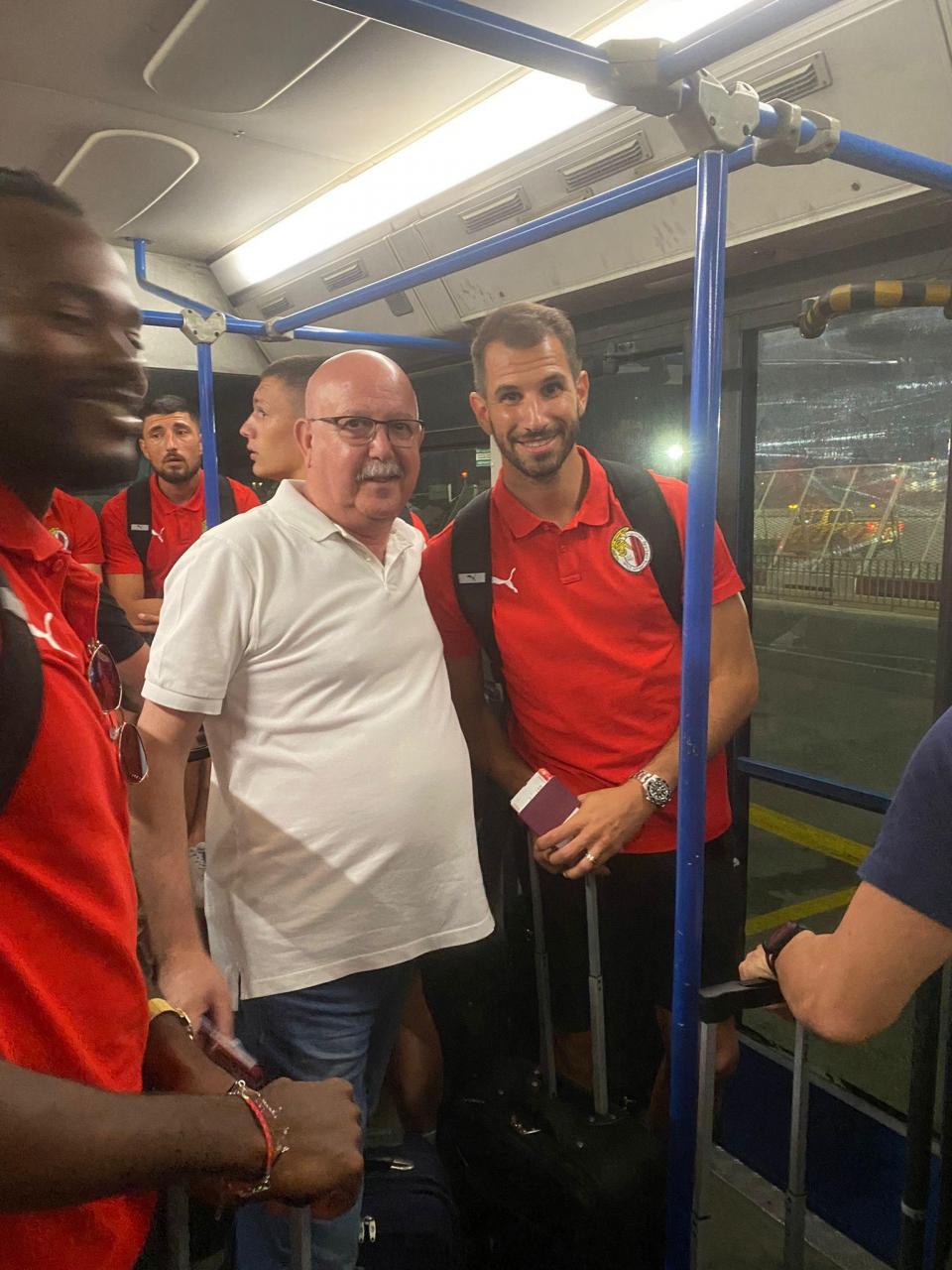 Like many other Ħamrun supporters, Joanna Debattista watched the nail-biting football match at home.

"When Bulgaria scored, I burst into tears. But not even a minute had passed, and we scored a goal, and once again I burst out crying again...  this time with happiness," she said.

Debattista, 33, fell in love with the game and the team as she was growing up, with her father being a huge Ħamrun supporter.

"As I was growing up, football was not considered something girls should be interested in. Still, being surrounded by my father's enthusiasm for the game, I couldn't help but be attracted to the adrenaline of it all."

She recalled how at times she would sneak off and watch the matches unbeknown to her father. Nowadays, her whole family, including her two young children, all share their love for the Red team. 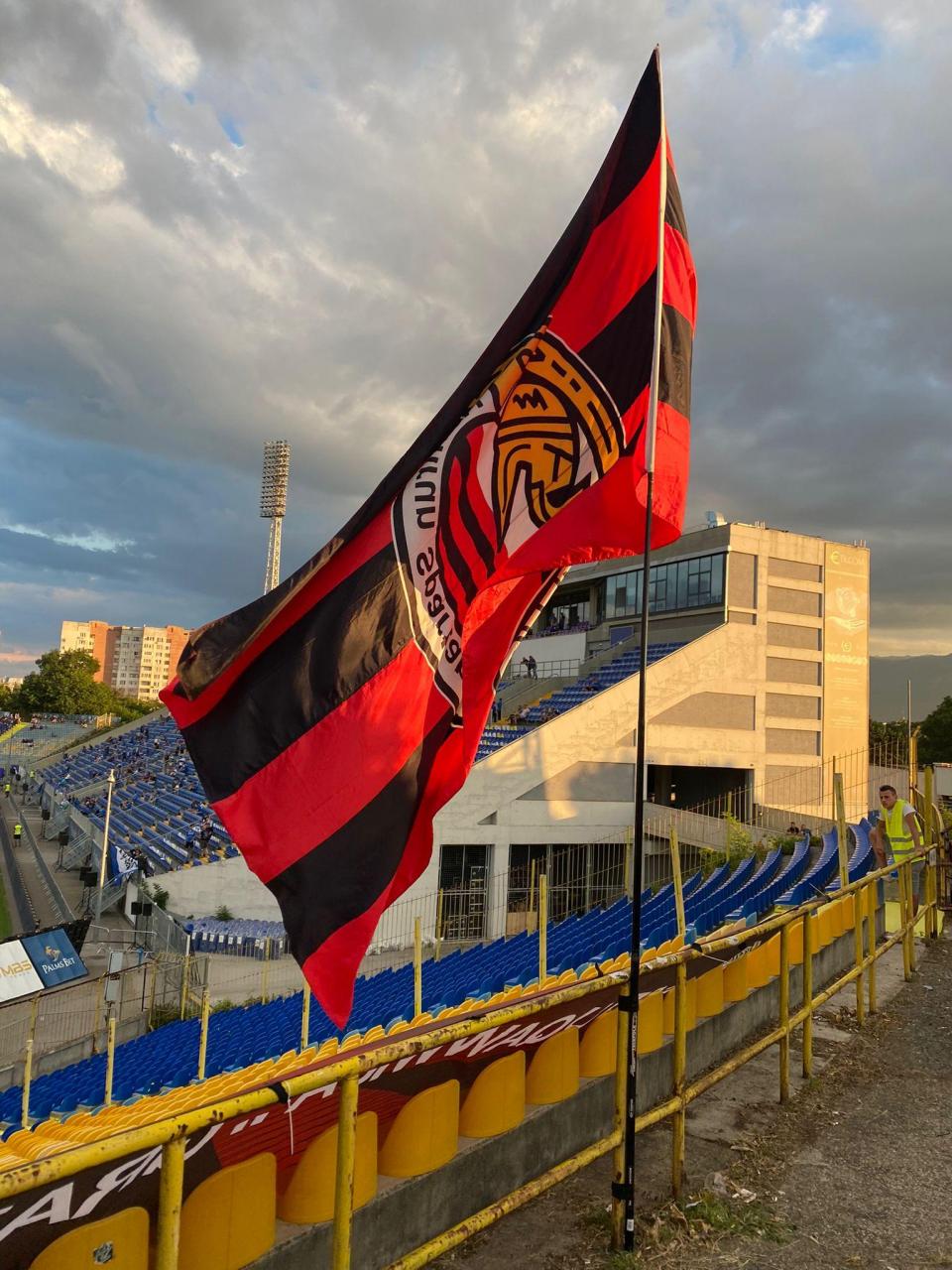 "I remember the club going through difficult times, and we would ask ourselves 'when will it be our time to shine?"

Watching the match on Thursday with her two children, she went through a wave of emotions.

"The feelings I felt were indescribable. I'm proud, not just for Ħamrun but for Malta, and Maltese football, which with this match, has gone up to a whole other level."

She said the best thing about the team was the support it received.

"Even during the hardest times, the support was always there - the volunteers were always there. It's in our blood... it's hard to describe this feeling."

Debattista will be among the supporters flying to Serbia for Thursday's match.

Born and raised in Ħamrun, one of Stefan Cutajar's earliest recollections of the red and black shirt was when he had his first training session with the Ħamrun Spartans Youth Nursery at the age of four.

"Ever since that day, it's been the one and only local football club I've followed," he said.

Apart from training with the youth nursery for 12 years, Cutajar was born into a family of football lovers. His father coached various age groups and for a season was also the head coach of the under-21 team. His uncle was also part of the title-winning squad in the late eighties and early nineties.

When asked if he thought the Spartans would win, he said:

"To be completely honest with you, when we conceded that last gasp goal at Ta' Qali last week, I thought our chances of qualifying from this round had gone out of the window," he said.

"However, the performance we put in, especially in the second half and in the added extra time, gave me some hope that we could perform a miracle."

He said he was "incredulous and overrun by pure joy" when Matteo Fedele slotted home the last penalty kick.

"I think most Ħamrun supporters would tell you that it all feels like a dream, especially when you consider the pain and anguish we had to go through in the 30 years after the late Victor Tedesco left the club and we had to witness a slow and agonising descent into a state of perpetual financial instability," he said.

"So, to see your home town make it to the last playoff round in a European competition, in such a dramatic fashion, is simply incredible."