Electrogas was secretly given an 18-year breather before having to pay €18 million in damages due to Enemalta as compensation for delays in delivering the power station project, e-mails reviewed by Times of Malta show.

No formal public announcement about this deal to defer the payment for 18 years was ever made by the government and even the National Audit Office was not told about it during a probe into the power station contracts.

On the contrary, former energy and tourism minister Konrad Mizzi had given the impression during a February 2017 parliament speech that the government was going to get tough with Electrogas.

“The government will ensure every single penny of the damages due are paid, contrary to the approach taken by previous Nationalist governments,” Mizzi had said during a debate about the power station deal.

Mizzi did not respond to a request for comment from Times of Malta by the requested deadline.

The Labour Party had staked its credibility in 2013 on what one Electrogas insider described to Times of Malta as an “impossible” promise to deliver a functioning power station within 18 months.

It has since been revealed how two key government figures, Mizzi and former OPM chief of staff Keith Schembri, stood to receive up to $2 million from former Electrogas director Yorgen Fenech, via his secret company 17 Black. Fenech stands accused of financing the assassination of journalist Daphne Caruana Galizia, who was killed by a car bomb outside her home in October, 2017.

Electrogas only started delivering energy to the national grid in April 2017, and several months later was granted an 18-year holiday before it had to pay the damages incurred as a result of the delay.

Auditor General not informed of deal

The National Audit Office was tasked in 2015 with investigating the contracts and concessions awarded to Electrogas by Enemalta and the government.

In a 2018 report on the matter, the Auditor General’s office said it was unable to ascertain whether the €18 million in damages had actually been paid, as no information was forthcoming from Enemalta.

A spokesman for Enemalta told Times of Malta that the payment for damages was invoiced to Electrogas and was accounted for as a debt due and payable to Enemalta, which was retained on the company’s books since interest was being charged for late payment. 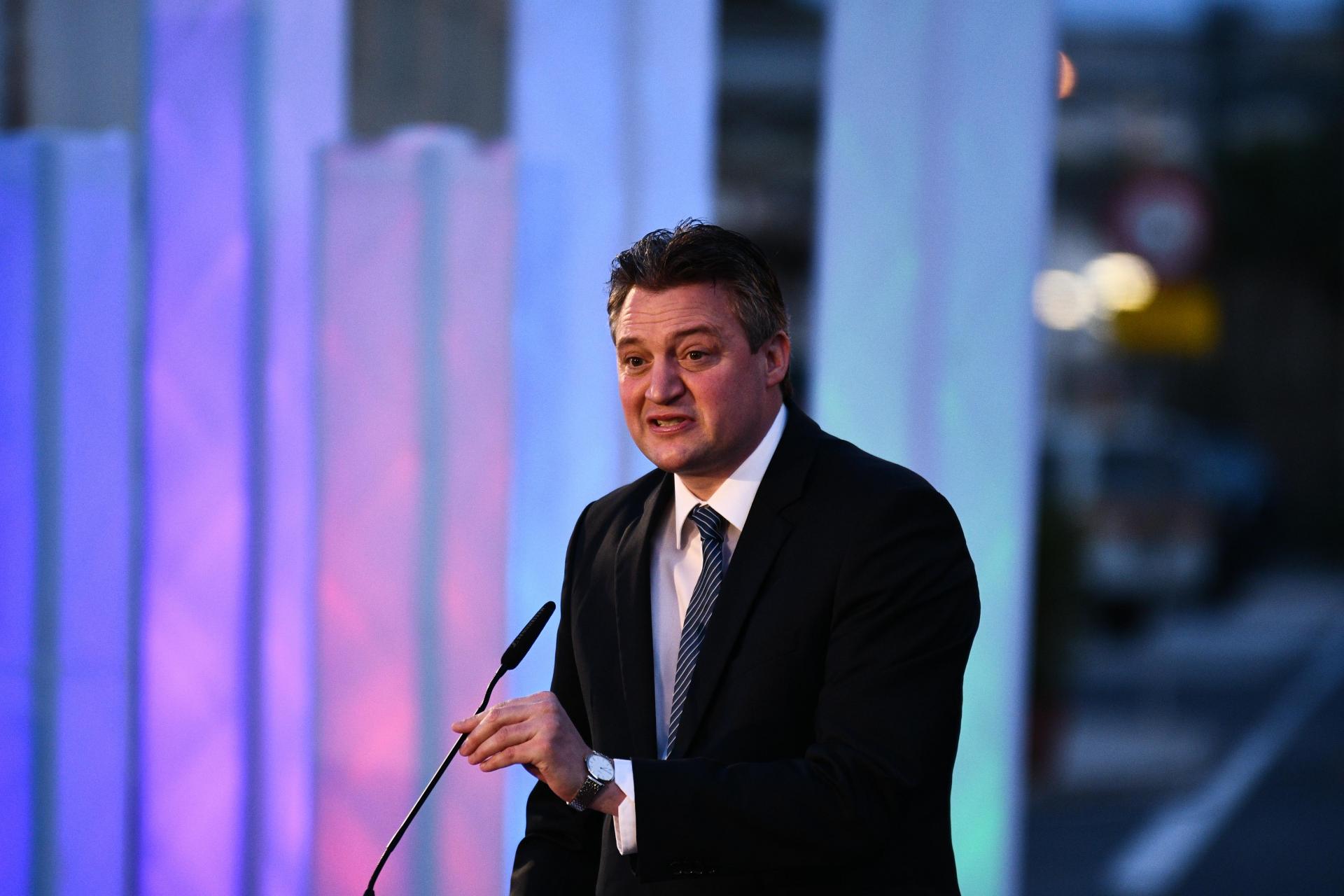 Enemalta financial statements for 2017 contain a reference to €18 million in “receivables” repayable to Enemalta after more than five years, at a yearly interest rate of two per cent, with no mention of Electrogas as being the debtor.

The e-mails reviewed indicate that at one stage, Electrogas appeared hopeful that the government would agree to waive the €18 million damages. In one e-mail sent by Yorgen Fenech on October 28, 2017, Fenech said there was an issue with waiving the damages, as Enemalta had already factored them into their accounts.

“There is a problem with the waiver of the LD’s (liquidated damages). Enemalta has already accounted for them in their accounts and therefore they would have to reverse that, which would result in huge controversy,” Fenech said.

Fenech had indicated in the email that the payment after 18 years would be interest free, but it would appear that an agreement was later reached to pay two per cent interest annually on the €18 million.

Fenech claimed in the same email that he was taken aback about how “blind” Fredrick Azzopardi and Enemalta were to ongoing contract discussions.

“This was evident and pretty embarrassing. The outcome was that they [Enemalta] where [sic] intent on questioning each and every item which I clearly did not entertain and explained that at this stage it is totally impossible.”

Azzopardi did not respond to a request for comment, instead inviting Times of Malta to direct its queries to Enemalta.

One source familiar with the negotiations said Electrogas officials would at times try bypass Azzopardi and Enemalta whenever negotiations hit a stumbling block, by going directly to Konrad Mizzi. 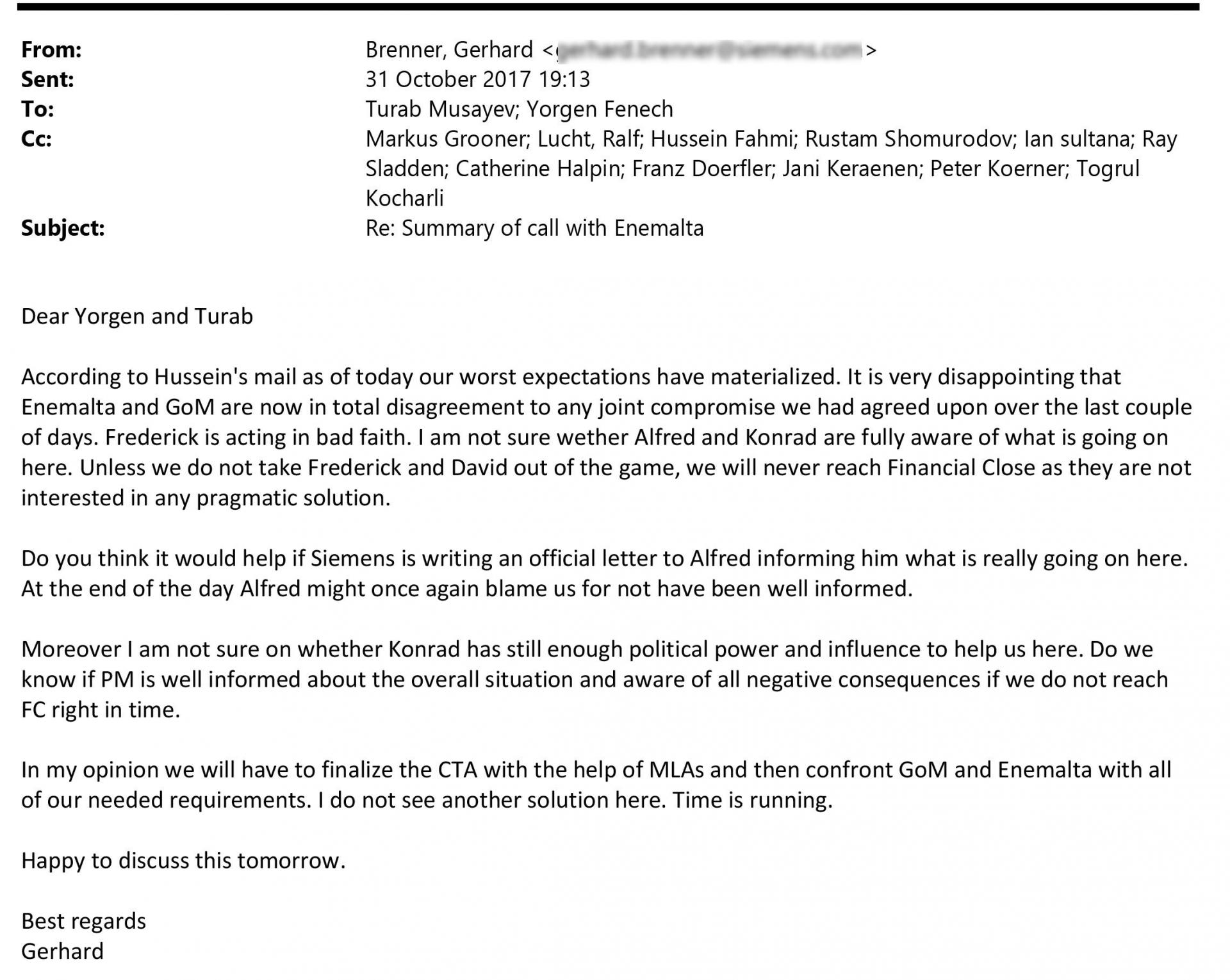 An email sent by Gerhard Brenner on October 31, 2017, in which he raised concerns over whether Konrad Mizzi still had enough clout to help Electrogas.

A representative from Siemens, one of the partners in the Electrogas consortium, said in an internal e-mail that Azzopardi was acting in “bad faith”, and there was a need to take him and David Galea, the lead commercial negotiator, “out of the game”, as they were not interested in a “pragmatic” solution when it came to certain issues, one of which was a potential waiver of the €18 million in damages payable by the consortium.

Galea is a close associate of Mizzi and was subsequently tasked by Enemalta with helping its officials prepare for a potential parliamentary grilling about the Electrogas deal.

In the e-mail dated October 31, 2017, Gerhard Brenner raised concerns over whether Mizzi still had enough clout to help Electrogas.

“Moreover, I am not sure on whether Konrad [Mizzi] has still enough political power and influence to help us here. Do we know if PM [Prime Minister] is well informed about the overall situation and aware of all negative consequences if we do not reach FC [financial close] right in time,” Brenner wrote.

Brenner did not respond to a request for comment by the requested deadline.

During 2017, Electrogas was facing serious cash-flow pressures due to delays in re-financing a project that had become increasingly mired in corruption claims.

The cache of Electrogas emails, leaked to Caruana Galizia in the months leading up to her assassination, shed light on the frantic efforts in 2017 to close off the project’s long-term financing. These e-mails and documents continued to be leaked after Caruana Galizia was killed.

One source familiar with the deal reached about the damages said Electrogas was clearly not in a financial position to pay the €18 million in 2017.

During that year, the consortium was scrambling to finalise contractual negotiations with Enemalta that would pave the way for it to obtain long-term financing from a consortium of banks before cash ran out and it was forced to default on its loan obligations.

Such a default would have had a knock-on effect on the government, as it had controversially agreed in 2015 to cover Electrogas’ borrowing with a €360 million guarantee on its debts.

The government secretly agreed to extend the government guarantee on the loan shortly before the June 2017 election, buying Electrogas a crucial few more months to finalise the pending negotiations with Enemalta.

It was announced in December 2017 that the government would be lifting the loan guarantee as Electrogas had succeeded in re-financing the project.

Timeline: From station to station