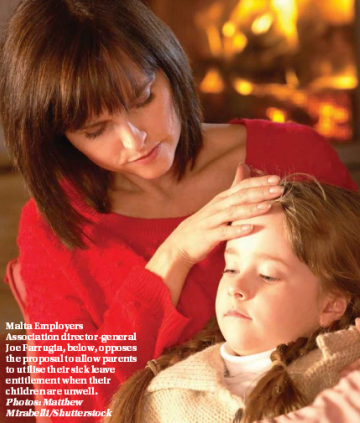 The Department of Employment and Industrial Relations is examining how to best introduce a proposed measure making it possible for parents to call in when their children are unwell.

A spokesman said that although there was no specific time frame, it was hoped the proposal would be implemented “during the current legislature after consultation with the social partners.

The proposal instantly came under fire from employers, workers’ representatives and sociology experts, who insisted it would have an adverse effect on Malta’s competitiveness. They said they could never agree to a measure that encouraged absence from work rather than presence and therefore increased productivity.

More in The Sunday Times of Malta and the e-paper on timesofmalta.com Premium