Two-thirds of employers say their business has been severely or heavily impacted by work permit delays, a survey conducted by the Malta Employers Association has found.

Third-country nationals must apply for a work permit and receive approval from Identity Malta before being legally allowed to work in Malta.

Identity Malta says that the work permit process should take up to two months. However, the survey suggests that in the majority of case, work permits are not processed in time

Just 14 per cent of employers said that Identity Malta had processed work permit paperwork they submitted within two months.

The majority – 51% - said that it took between two and four months for the paperwork to be settled.

Almost a quarter of respondents, 22%, waited between four and six months while another 13% said they had waited for over six months before work permits were successfully processed.

Delays in processing work permits impact businesses across society, with a quarter of Malta's workforce being foreign.

The MEA survey shows that three-quarters of employers, 76%, are currently waiting for work permits for their soon-to-be employees. 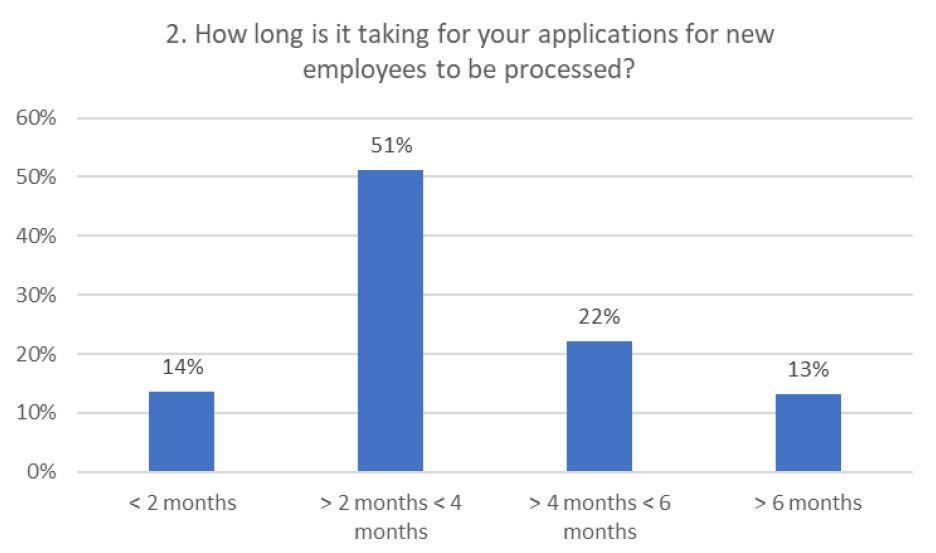 Results from the MEA survey.

Problems with Identity Malta delays in processing paperwork are not new, with employers having expressed frustration at bottlenecks in the past.

MEA director general Joseph Farrugia told Times of Malta that delays have increased significantly since March. He attributed this to a sudden influx of applications following the COVID-19 pandemic.

Persons renewing their permits with the same employer are also facing delays. A person in that situation told Times of Malta that they have been waiting for her document for five months.

“I applied in March. My permit expired in May. And until now, I don’t even have approval in principle,” the person said.

“So for two months, I’ve had no valid documents and cannot travel. All my summer, ruined,” the applicant said.

Identity Malta: delays often due to lack of paperwork

In a reply, Identity Malta said that many delays in processing work permits were attributable to a lack of documentation submitted.

When an applicant is not subject to additional checks, the process takes between six to eight weeks, the agency claimed, with visa-exempt applicants or the engagement of EU workers taking less time to process.

The agency said it was in constant communication with stakeholders to improve its service and was committed to speeding up processes without compromising on security.

Apart from consulting with stakeholders, the agency said it also organised seminars for employers to educate them about the work permitting process and had recruited additional staff to assist foreign embassies or consulates in processing visas.

In a statement, the Nationalist Party said that the failure of government entities to coordinate between themselves was adding undue pressures to the private sector.

Entities like identity Malta, JobsPlus and the health authorities needed to be more practical and less bureaucratic in their work, the PN said.