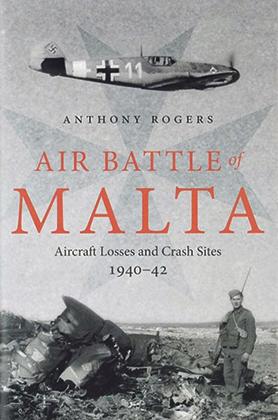 “Those airmen died nobly for their country … even though they be our enemies, whatever their crimes, that fact we should acknowledge.”

This extract from the diary of Pilot Officer ‘Sonny’ Ormrod sets the tone for this wartime reference and anecdotal book.

Making use of several official and historical documents, while referring official visits and eyewitness reports from Malta, England and Italy, the book is much more than a clinical catalogue of the more than 200 air-craft crashes on and along the coast of Malta during World War II, between 1940 and 1942.

The book focuses on the aircraft that was destroyed on Maltese territory and, through these personal accounts and other documents, Rogers manages to make sense of inconsistent stories and conflicting reports in an engaging manner.

The book splits the war into a number of time periods, giving the book not only a methodical, but also a highly-readable character.

Considerably aiding the reader, it includes general maps of Malta and Gozo, stating individual sites referred to within the chapters, as well as glossaries of all locations and airmen involved, making it a veritable reference document.

Through these accounts, Rogers succeeds in giving an unbiased, poignant, tragic – but also humorous – account of events during air battles over Malta. The author puts his personal experience to excellent use with vivid, accurate descriptions.

Thus, we get detailed explanations of the events leading up to and following, the destruction of the aircraft belonging to the main protagonists. In each case, Rogers explains what led to this turn of events, showing us how everything that took place during the war, on the ground and during battle.

Rogers puts us in the seats of the doomed aircraft, together with the airmen who fought in them, allowing us to see through the eyes of those who witnessed with jubilation or shock at the destruction of aircrafts of their friends or foe. The relief at the escape and survival of its crews; and the sorrow at the demise of their fellow airmen, friends, countrymen or enemies in the sky… through Rogers’s words, we feel all this and more.

On the ground, we’re even given a glimpse of the idiosyncrasies of the local Maltese population, the oft commended bravery in incredibly trying times shining through, leading to Malta being awarded the George Cross.

We find references to the hum-orous quirks, the misunderstandings and reactions which feel all too familiar even today – such as the poor British airman surviving the obliteration of his plane, then parachuting to the ground, only to have coffee or bowls of water flung in his face.

We also see a dark, sinister side of people that is much too barbaric and shameful, even under the premise of war, for most to dare recount in person –  anecdotes that are, however, brought to light in this book.

Following each crash, Rogers finds out what became of those who survived – with some retiring from the war due to injury, to others taking to the skies to continue the fight, often only to be mentioned later in yet another dramatic crash. Some perished and the author is able to piece together some small fragments of information in order to shed some light on those who went missing in action and whose precise fate still remains unknown.