Construction company Elbros Malta is seeking to raise building heights around a protected 17th century windmill in Żurrieq to allow construction of up to five storeys high, prompting a heritage NGO to express concern.

The company, together with architectural firm Maniera Group, has filed a planning control application for the area around Mitħna tal-Qaret.

Din l-Art Ħelwa, an NGO that specialises in the preservation of such buildings, raised concerns over the application.

It pointed out that if dwarfed by the surrounding development, the Grade 1 scheduling of the old windmill would mean nothing.

The highest points of the windmill, according to the levels indicated by the applicant, are of about 11.50 metres.

“Therefore, most of the potential indicated developments will be allowed to go higher than the Grade 1 windmill itself,” the NGO said. 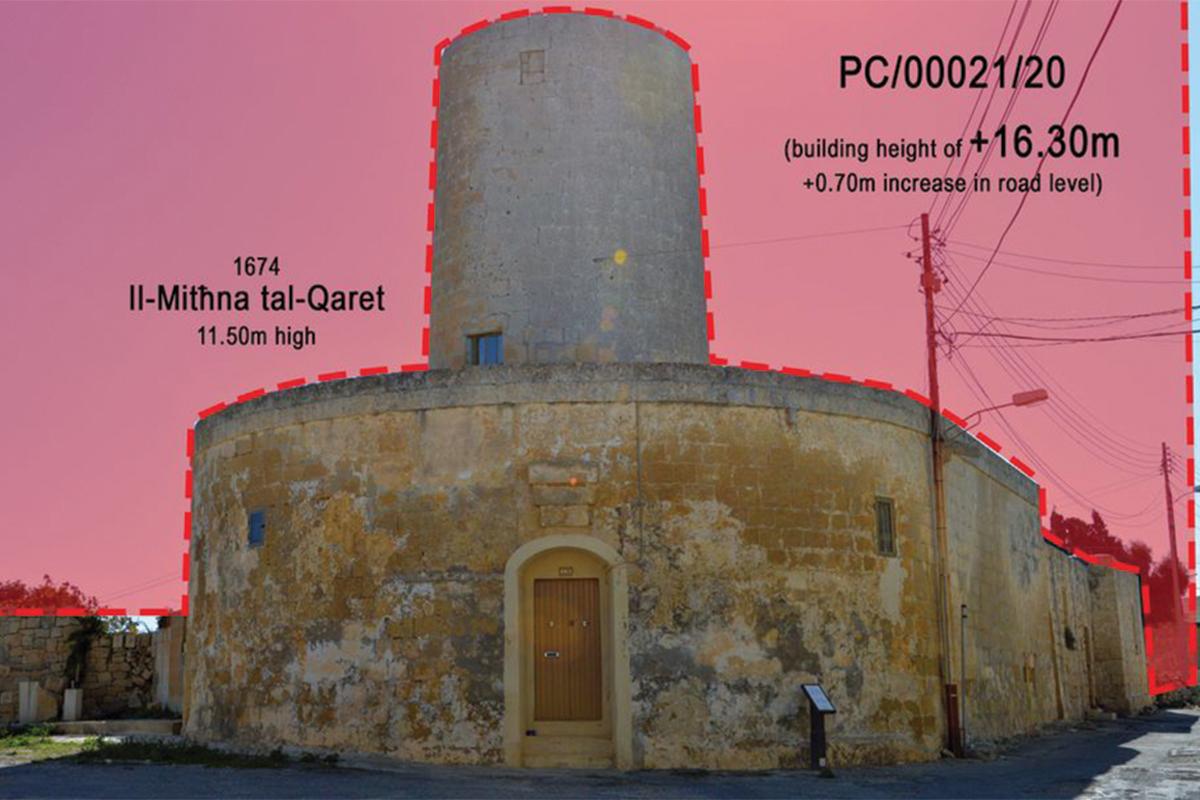 Most of the potential indicated developments will be allowed to go higher than the Grade 1 windmill itself.

The windmill was built in around 1674, during Grandmaster Niccolo Cotoner’s time.

Din l-Art Ħelwa said the proposal would breach development control design policy guidelines by disturbing the visual profile of the Urban Conservation Area. The windmill is situated on a site considered to partially be a UCA, partially outside of development boundaries, besides the Grade 1 protection that tal-Qaret is supposed to enjoy, the NGO pointed out.

It said other policy guidelines would be breached, such as the need to preserve the character, scenic or ecological value of the area and the ability to preserve soil quality.

Should the proposal be approved, it would breach several objectives from the strategic plan for the environment and development (SPED, 2015), Din l-Art Ħelwa added.

Among them are the avoidance of land take-up in the rural area, safeguarding cultural heritage, making sure scheduled buildings are not threatened, protecting the character of distinct urban areas and protecting green open spaces.

Keith Sciberras, head of the department of art and art history at the University of Malta, said that never had Malta seen “historical monuments being engulfed by non-contextual development at such speed and with such widespread lack of consideration”.

Speaking on behalf of a 29-person group of independent scholars across Malta and Gozo, he said that while the planning authority played a major role, “we should also point fingers at architects who sign off on these projects, especially when they clearly know that such an application will heavily compromise these historical areas”.

Questions that have been sent to both Maniera Group and Elbros Malta remained unanswered.