Farrugia, whose ministerial portfolio makes him responsible for the conservation of the environment and wildlife, on Monday shared an image on social media in which the FKNK’s top official described him as an ally to their cause.

“To keep on safeguarding and practicing these practices in a sustainable way, we need people who understand us. Aaron is one of these people,” FKNK president Lucas Micallef said in the post shared on Facebook. 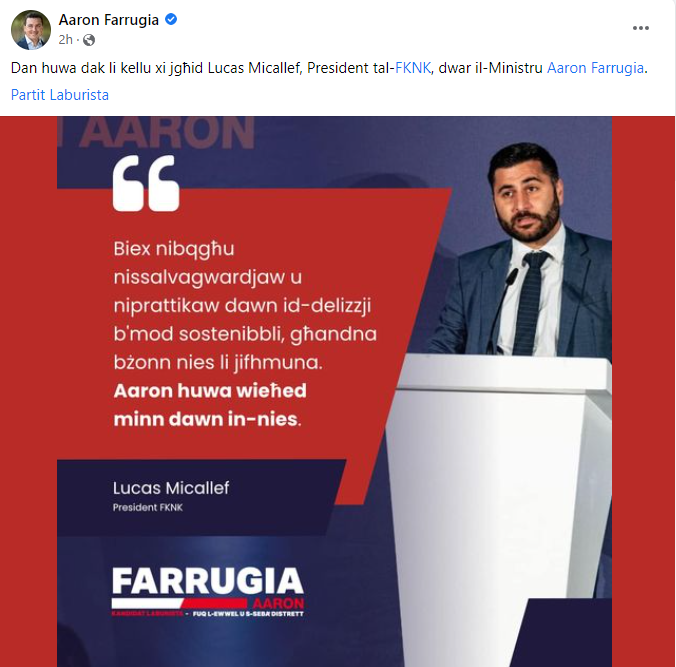 Times of Malta has reached out to Farrugia with a request for comment.

Farrugia had responsibility for a consultative body on hunting and trapping taken out of his ministry and parked with Gozo Minister Clint Camilleri, a registered trapper, when the two men were made ministers in January 2020.

The Ornis committee that Camilleri is politically responsible advises the government on how to handle hunting-related legislation and on the timing and format of the hunting and trapping seasons.

BirdLife Malta has filed a court case arguing that, by law, responsibility for the sector must lie with the environment ministry.

Farrugia was then present when a 2020 agreement was signed between the government and FKNK, giving the hunters’ federation sole access to large swathes of the Miżieb and Aħrax woodlands during the hunting season.

The move had been harshly criticised by conservationists, with dozens gathering in the area in protest before the ink on the deal was barely dry.

Environmental NGOs have taken the matter to the courts to revise the decision. That case remains ongoing.

Two years on from that agreement, a special police unit responsible for probing environmental crimes is investigating suspicious dumping linked to an FKNK project in the Miżieb woodland.