Environment and Resources Authority chairman Victor Axiak denies any conflict of interest in the controversial approval of the Townsquare high-rise project, insisting he never worked as a consultant for the developers on another project.

“From my end, I don’t think there was any problem. Whenever I thought there was a conflict, I always excluded myself. I have done this time and again in the past, but this was not necessary here,” Prof. Axiak told the Times of Malta.

He was contacted after lawyer Claire Bonello alleged in her column in The Sunday Times of Malta that Prof. Axiak was a consultant for the consortium developing the new gas-fired power plant, which included the developers of the Tigné tower, the Gasan Group. 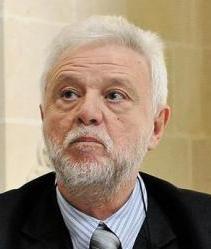 Prof. Axiak insisted that he had been engaged as an “independent consultant” to conduct a study and the Gasan Group had not featured in his dealings.

The environmental impact assessment for the project was in fact conducted by ERSLI Consultants on behalf of Enemalta in 2013 when the Gasan Group’s consortium had not yet been chosen to develop the new power station.

The controversial Townsquare tower was approved by the Planning Authority board earlier this month by seven votes in favour and six against. Prof. Axiak did not attend the final hearing, citing health reasons.

Timothy Gambin, who voted in favour, also acted as a consultant on the power station

He was not the only board member to have been mentioned as having a potential conflict. Underwater archaeology expert Timothy Gambin, who voted in favour at the final hearing, also acted as a consultant on the gas-fired power station. Attempts to contact him yesterday proved unsuccessful by the time of writing.

Prof. Axiak has said he was considering whether the ERA should appeal the tower approval and would meet with lawyers and experts in the coming days before making a final decision.

“One of the first things I want to do as ERA chairman is meet with lawyers and other experts to decide on how to deal with this matter,” he said.

The ERA is being urged to appeal the PA’s decision to grant the Townsquare permit, with the Nationalist Party, the Sliema local council, the Church Environment Commission and the Democratic Party all issuing statements to this effect.

Earlier this month, the ERA had declared it “did not envisage appealing the PA decision”.

The Sunday Times of Malta reported that Prof. Axiak had expressed reservations about the controversial high-rise project in a previously unknown memo. The memo, which he sent to Dr Gambin, was intended to be read out during the hearing on the Townsquare project and had described the environmental impact assessment for the project as a “sham”.

Dr Gambin decided not to read out Prof. Axiak’s observations on the project during the hearing.