The European Union and the United Nations refugee agency on Monday called for a swift end to the political standoff that has left 629 migrants on a rescue ship drifting at sea after Italy and Malta refused to let it dock.

The ship, with 629 rescued migrants, including 123 unaccompanied minors, 11 other children and seven pregnant women aboard, is waiting in international waters between Italy and Malta.

"We are talking about people ... The priority of both the Italian and Maltese authorities should be ensuring these people receive the care they need," Commission spokesman Margaritis Schinas told a news conference.

"We call on all involved to contribute to a swift resolution so that the people on board the Aquarius vessel may be safely disembarked as soon as possible."

Matteo Salvini, the head of the far-right League party who became interior minister this month vowing to crack down on the influx of migrants from Africa, blocked the ship, operated by SOS Mediterranee and Doctors without Borders, over the weekend and demanded that Malta take in the migrants.

"Saving lives at sea is a duty, but transforming Italy into an enormous refugee camp is not," Salvini said on Facebook on Monday. "Italy is done bowing its head and obeying. This time there's someone saying no." 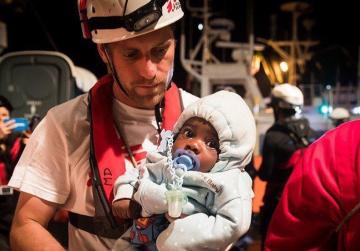 Pictures issued by SOS Mediterranee showed hundreds of Africans huddled aboard the ship, including a young girl wrapped in a blanket in the arms of a rescue worker.

"People are in distress, are running out of provisions and need help quickly," the UN refugee agency said, urging governments to set aside political considerations.

"Broader issues such as who has responsibility and how these responsibilities can best be shared between states should be looked at later," UNHCR special envoy Vincent Cochetel said.

SOS Mediterranee said the ship had enough supplies to feed the migrants, at least for another day.

EU law requires asylum seekers register in the first safe country they reach, but frontline countries such as Italy and Malta say the burden needs to be shared out across the bloc.

"This is not an inhumane act," said Transport Minister Danilo Toninelli, in charge of Italy's ports and coast guard.

"It's common sense ... We ask that all of Europe assume responsibility for such a delicate and important issue as is immigration," he said in a TV interview.

The Party of European Socialists in a statement lashed out at the Italian government.

The new government of Italy, an alliance of populists and the far right, has refused to allow a rescue ship to dock in the southern Italian port of Palermo because it fears a loss of support in local elections, it said.

"It is disgusting that the new Italian government is willing to risk hundreds of innocent lives, including those of children and pregnant women, simply to maintain its permanent electoral campaign mode for domestic political purposes.

It is disgusting that the new Italian government is willing to risk hundreds of innocent lives, including those of children and pregnant women, simply to maintain its permanent electoral campaign.

"It is also deeply ironic that an anti-European government coalition is now falling back on the argument that 'migration is a European responsibility', and is trying to provoke a diplomatic crisis with the Maltese government while refusing to fulfill its own obligations under international law.

"The PES has always argued that migration as a general phenomenon can only be managed fairly and collectively at a European level. But that is not the issue here, where more than 600 rescued civilians are in need of immediate humanitarian aid."

The response of the new Italian government contrasts sharply with the achievements of the previous government, led by Paolo Gentiloni, which reduced maritime migration flows by 80% thanks to the strategy implemented by interior minister Marco Minniti — while never refusing to provide emergency humanitarian assistance when it was needed.

The party called for a change of heart by the Italian administration.