Aminata Traoure survived a shipwreck in which she lost her baby daughter, her sister and her niece but she is determined to embark again on the illegal crossing to Europe.

For the 28-year-old from Ivory Coast, the perilous Mediterranean crossing from the North African nation of Tunisia is her only way to build a better future.

Her attempt ended in tragedy on March 9, when the rickety boat she had boarded capsized along with another in the Mediterranean, and she was flung into the waters with around 200 others.

Among the 39 who drowned was Sangare Fatim, her 15-month daughter.

Traoure said she would like to return home to Ivory Coast, 3,000 kilometres  southwest across the sands of Sahara, but she can’t afford it.

The number risking the dangerous sea crossing from Tunisia is rising and for the first time the majority on the boats are not Tunisians.

The price of the ticket – plus a fine for staying three years illegally in Tunisia – costs more than a crossing to Europe.

The number risking the dangerous sea crossing from Tunisia is rising and for the first time the majority on the boats are not Tunisians.

During the first quarter of 2021, more than half of those arriving in Italy from Tunisia were mostly citizens from sub-Saharan African countries, according to the Tunisian rights organisation FTDES.

So far this year at least 453 migrants have died trying to reach Europe from North Africa, the International Organisation for Migration says.

Around 100 of those had set off from Tunisia’s port of Sfax.

‘Hopes of their families’

“Despite the shipwrecks, despite our mourning families, we are always ready to risk our lives,” said Prista Kone, 28, also from Ivory Coast.

She attempted the crossing last year, but her boat was intercepted by Tunisian authorities.

Kone arrived in Tunisia in 2014 with a degree in business management and plans to pursue her studies.

But without money, she found work as a housekeeper, she said. She also discovered “the extent of racism” in Tunisia.

“My boss asked me not to touch her children because I am black!” Kone said. “When something was missing in the house, she accused me of stealing it”.

On the streets “people called me ‘monkey’ and threw stones at me”, she added.

It is a common story among her compatriots, packed into a small room in a working-class district in Sfax.

“If these people survived a shipwreck at noon, they would be ready to participate in another crossing at 1:00 pm,” said Oumar Coulibaly, head of the association of Ivorians in Sfax.

“For them it is Europe or death!”

Coulibaly believes there are some 20,000 people from sub-Saharan nations in Tunisia, nearly two-thirds from Ivory Coast.

“They represent the hopes of their families,” Coulibaly said. “Some came to continue their studies, to work, others were promised huge salaries, but... they were lied to”.

Without employment permits, many work illegally and are grossly underpaid, all while facing regular abuse by police or citizens.

FTDES president Alaa Talbi said migrants who have come for work in Tunisia want to leave, because “neither the legal framework nor the cultural framework favours integration”.

Deals between Italy and  Libya – another key jumping off point for Europe –  have likewise “complicated departures”, with more migrants trying to leave from Tunisia, he said.

Tunisia’s economy has lurched from crisis to crisis since the country’s 2011 revolution, most recently due to the coronavirus pandemic and lockdown measures.

With seas calmer in the looming summer months, many expect more Tunisians to risk the crossing too.

According to Catholic aid agency Caritas, people smugglers are luring migrants with tales that accommodation and jobs are now easy to find in Europe, claiming the virus has decimated the population. 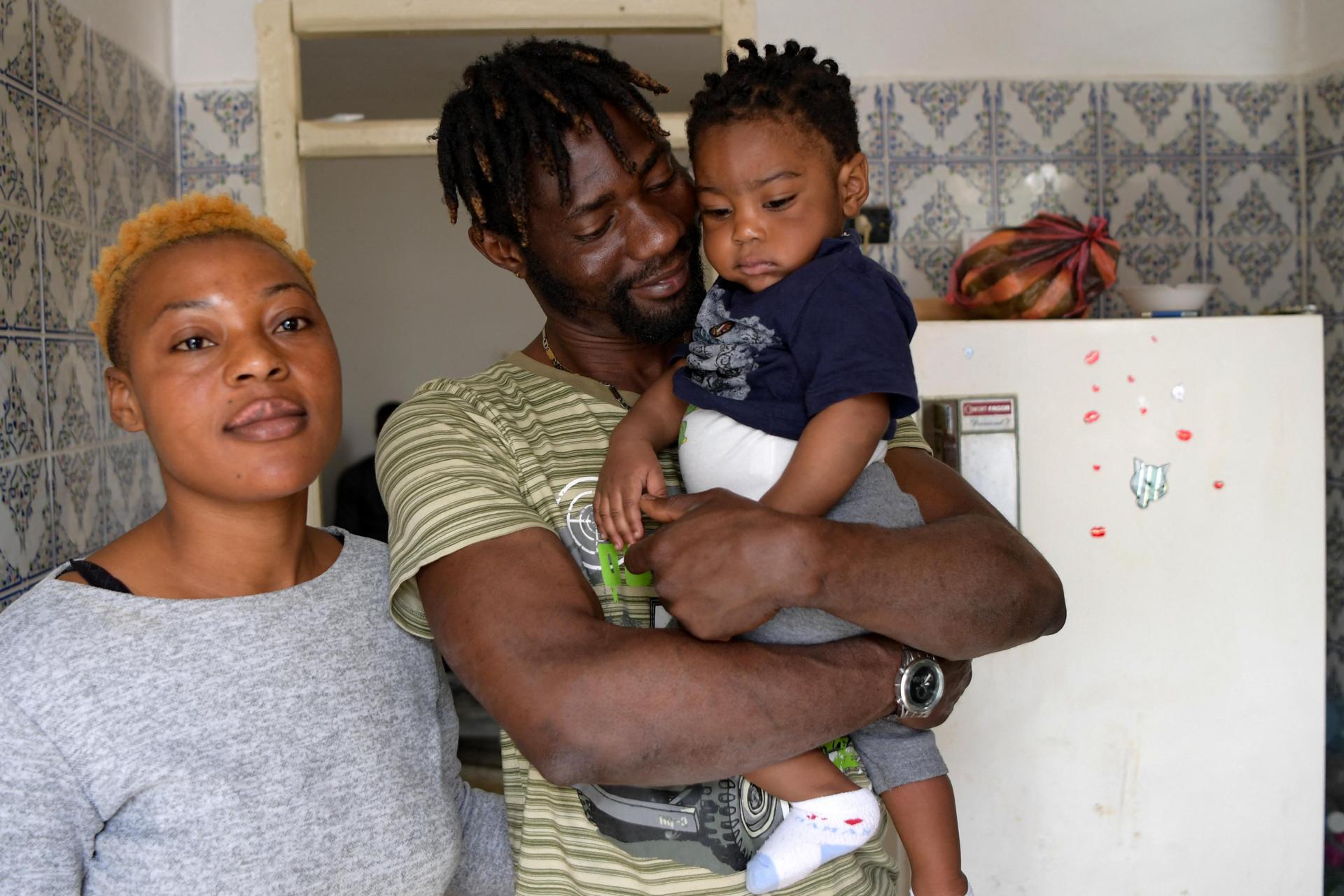 Migrants from the Ivory Coast Inao Steave, 34, and his wife Sozo Ange, 22, pose for a picture with their son at home in the Tunisian coastal city of Sfax.

Sozo Ange, a 22-year-old Ivorian mother, has been in Tunisia for two years.

For her, staying means – at best – life as a cleaning lady, earning enough to share a tiny room with several others and surviving off “soup from out-of-date turkey”, she said.

“I’ll leave here with my family, it is make or break,” she said, breastfeeding her son.

Her husband, Inao Steave, 34, is employed in a bakery – where he is worked harder than his Tunisian colleagues.

“I can’t let my child grow up like this,” he said. “We are aware of the risks, but we have no choice –we will die or live in Europe!” 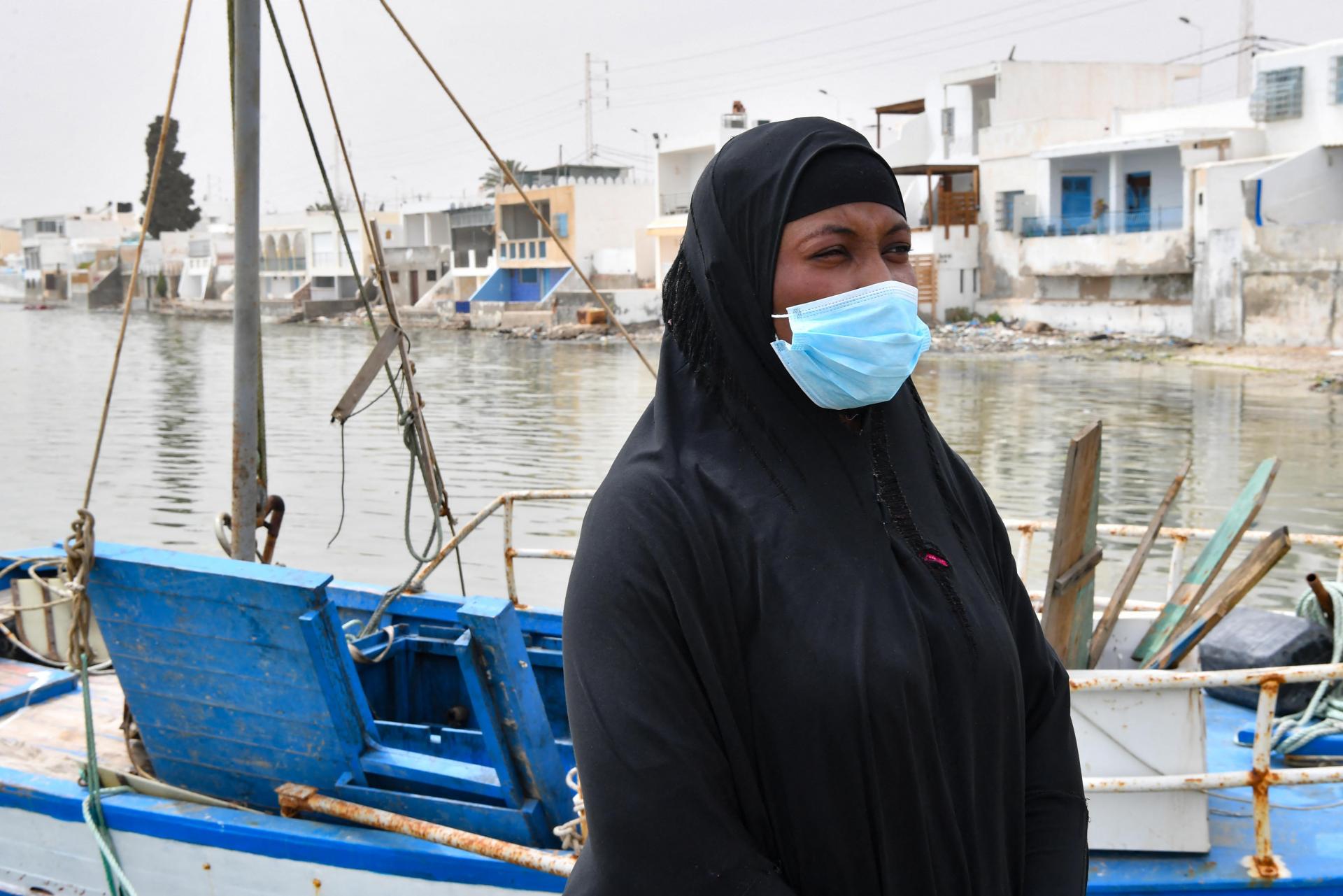 Aminata Traoure survived a shipwreck in early March while trying to reach Europe.