Migration, support for Libya, and Malta’s efforts on rule of law were up for discussion during a meeting between Prime Minister Robert Abela and European Council President Charles Michel on Wednesday.

Michel, a Belgian, heads the European Council, a Brussels-based collegiate body that sets the overall political direction and priorities of the EU.

It is made up of the heads of state or government of each EU member state, as well as the head of the European Commission.

During a meeting at the Auberge de Castille, Abela said Malta has registered good progress on “the matter of rule of law”.

Abela said that on taking over as prime minister he led a government focused on addressing shortcomings in this field.

The government had engaged in dialogue with the Venice Commission and other stakeholders with the ultimate aim of introducing changes and reforms.

In just a few months, a number of reforms had been enacted, especially regarding the way appointments are made in Malta.

The Commission against Corruption got a special mention with Abela saying the way this operates was being studied by President George Vella.

On the issue of migration, Abela said he would be on the phone with Michel daily if needed.

Both Abela and Michel had earlier gone on a short helicopter surveillance mission with the Armed Forces.

“We did not see a boat of migrants which is rare not to see. It is not unusual to see several boats a day with 90, 100, 150 migrants,” the prime minister said.

Abela said there was no holistic policy when it comes to migration rescue in Europe.

Referring to the Maersk cargo vessel which had been stranded at sea with 27 migrants on board, Abela said “the Union left those migrants there”.

Turning to Malta’s North African partners, Abela said Libya was not the cause of the migration problem. In fact, Libya had in recent months helped Malta more than the EU on this issue.

Abela said Libya itself needed help. It should not be thought of simply as a source of migrants, but instead as a country that “deserves to be given its dignity back”. 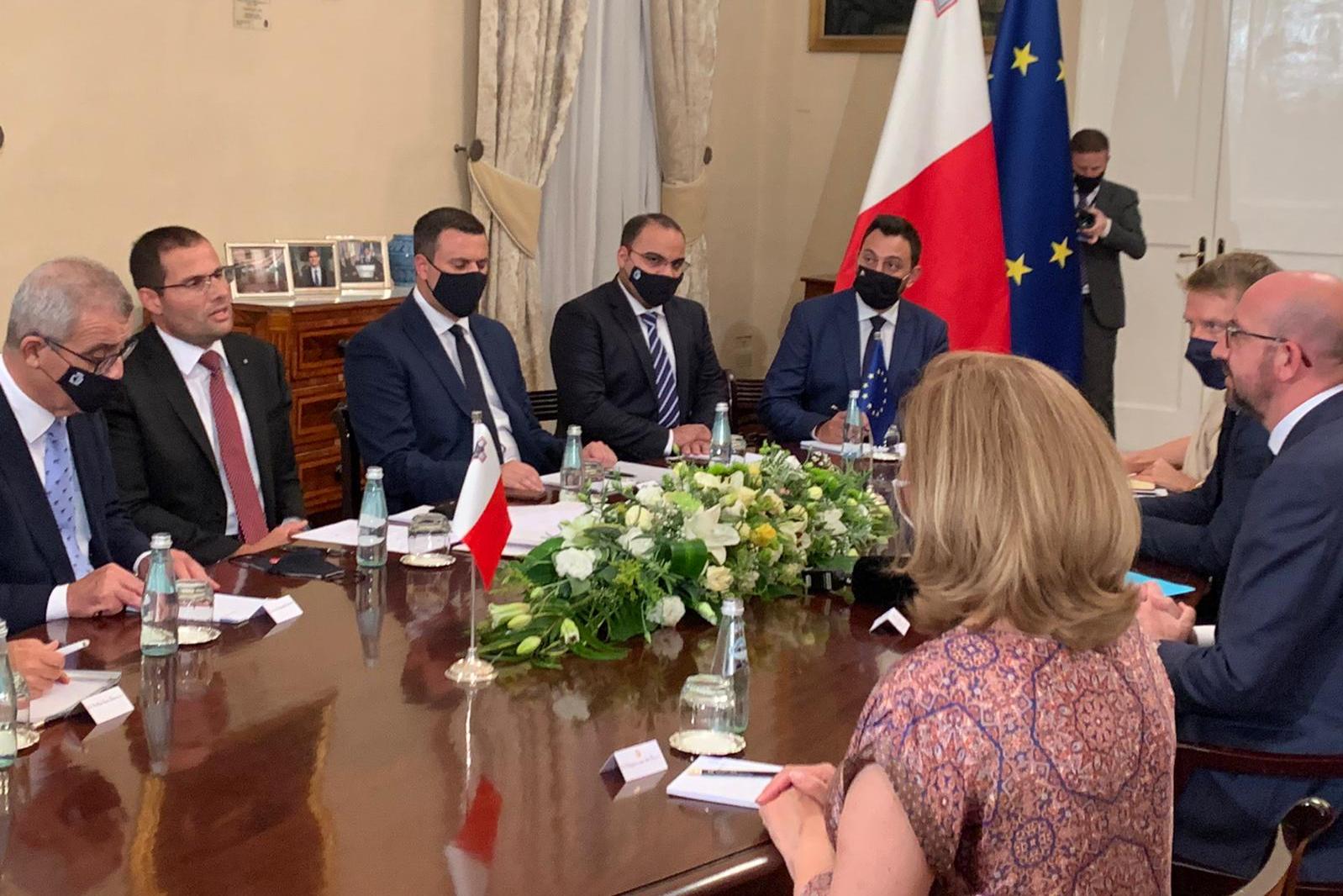 To do this, oil production needs to be kickstarted in Libya once again. Libya’s coast guard also needs more resources. And ultimately the criminal groups that profit from migrant smuggling need to be addressed.

On his part, Michel acknowledged Malta’s recent efforts to address the rule of law.

Turning to migration, Michel agreed that decisions needed to be taken. He said EU states needed to avoid getting drawn into a struggle over this issue and instead cooperate with one another.

He detailed three priorities which he hoped to see discussed by member states; resources for border control, cooperation with transit and source countries, and ultimately better asylum mechanisms.

He said that perhaps it was time to start tailoring support for the specific realities of frontline member states.

During the meeting between Abela and Michel, civil society group Repubblika organised an impromptu protest.

Those gathered in the square outside the Auberge de Castille called for justice over the killing of journalist Daphne Caruana Galizia.

The group had earlier held another surprise anti-corruption demonstration, also in front of Castille, claiming government corruption is facilitated by ministers' failure to speak out against it.

Michel will on Thursday pay his respects to Caruana Galizia at the site of her assassination in Bidnija.