She might be the pride of Gozo, but Malta’s 2019 Eurovision hopeful Michela Pace has genes which are distinctly Italian, Greek and even north African in nature.

An analysis of Michela’s genetic background carried out by DNA experts MyHeritage has revealed how the talented young singer’s ethnicity is 28.2% Italian, 28% Greek and south Italian, 14.55 Sephardic Jewish and 13.6% Sardinian, among other things.

Michela can also count on a 4.3% west Asian background and even a 1.7% Nigerian ethnic backdrop – a varied ethnic background that tallies perfectly with her Eurovision song Chameleon.

“I never knew that I had Greek, Sardinian and North African roots, so all this was a first for me,” she told the company.

The study was carried out and published by Eurovision Song Contest sponsor MyHeritage, which tested the DNA of several contestants past and present.

It revealed that Belgium’s contestent Eliot Vassamillet, for instance, is more than 50% English, while England’s Michael Rice is more than 65% Irish, Scottish and Welsh.

Michela's varied ethnic background is to be expected, given Malta's varied history and geographical location in the centre of the Mediterranean.

Comprehensive data on the genetic background of Maltese people is hard to come by, given the country’s small size and limited population.

A 2008 study which suggested that 50% of Maltese men had Phoenician ancestry was subsequently challenged as being methodologically flawed. 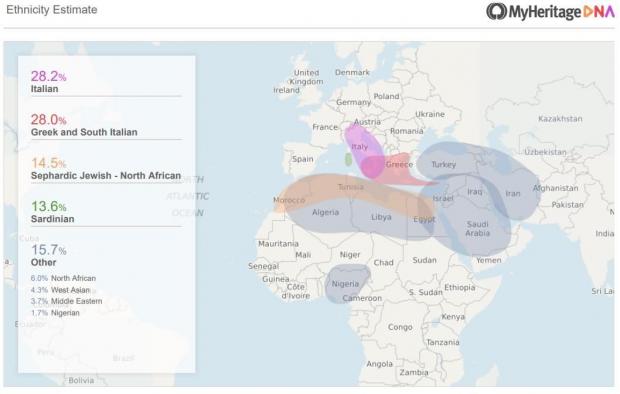 Michela Pace is as Mediterranean as it gets.

Mindful of that knowledge gap, in 2015, local scientists Alex Felice, Joseph Borg and Clint Mizzi launched the Maltese Genome Project, with the explicit plan to map the genome of around 1% of Malta’s population.

Michela Pace will perform in the 2019 Eurovision Song Contest semi-final on Thursday evening in Tel Aviv.