Hundreds of people were evacuated and operations were suspended for two hours at Malta International Airport on Tuesday afternoon after a fire broke out in the arrivals concourse.

People streamed out onto a section of the airport apron as well as on the road on the other side of the building while firefighters moved in. Nobody was injured.

The blaze was noticed at about 1.15pm. Sources said the fire started in a small pump room used for a fish aquarium. The blaze did not spread but generated a lot of smoke, leading to the evacuation.

Some passengers were stranded on their aircraft, including those who had just arrived on an Emirates flight from Dubai.

Stuck on the apron at Malta airport electrical fire in the terminal... they want us back in the plane... yeah right....

MIA said its fire services were immediately deployed to manage the situation.

At 3pm, MIA said the fire had been extinguished. By 3.15pm, staff and passengers started going back into the terminal.

An inquiry is underway to establish the exact cause of the fire.

At 4pm, MIA said terminal operations were resuming and its recovery plan had been activated.

A total of 16 flights were impacted.

It said other flights may be affected today and advised passengers to check for flight updates on www.maltairport.com before going to the airport.

An airport official explained that flights were grounded because of the need to evacuate some people to the airport apron.

He said that initially it had been decided to only evacuate the arrivals lounge, with people directed out to the street, but the airport fire officer then decided the whole building should be evacuated. 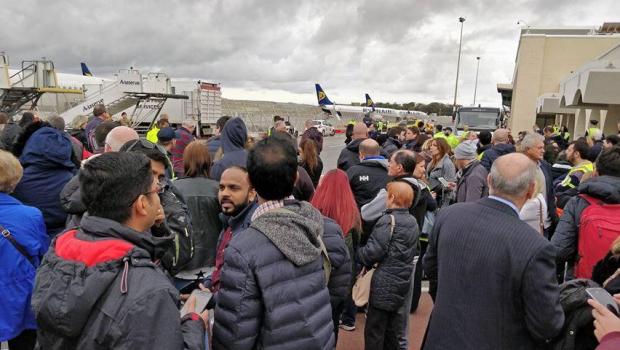