Former Vitals Global Healthcare’s CEO, Armin Ernst, has updated his LinkedIn profile, showing he is now president of Steward Healthcare International and that he has held the post since September.

The Times of Malta reported a few weeks ago he had worked for Steward before taking up his position in Malta, with the profile then showing him as being active in both companies simultaneously. This gained more significance when Vitals sold its 30-year concession for three hospitals in Malta to Steward.

Vitals has previously said it did not know anything of Dr Ernst's dual role, saying it was "unaware that Dr Ernst was involved with Stewart [sic] while engaged by VGH.” 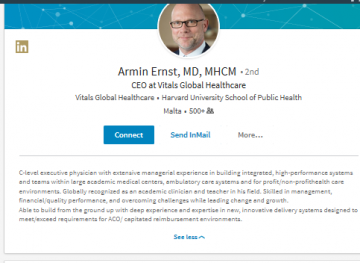 Dr Ernst and operations chief Eric Buehrens had resigned and left Malta in the autumn, with Vitals insisting that “Dr Ernst had some personal problems and he decided to go back to the United States,” at no point mentioning Steward.

It was subsequently learnt that the government had known about the talks between Vitals and Steward three months before the agreement was announced just before Christmas. Health Minister Chris Fearne admitted it was Dr Ernst who had suggested Steward should purchase the 30-year hospitals concession.