Darren Tanti and I met back in 2014 when collaborating on the APS Mdina Cathedral Contemporary Art Biennale. Back then, Darren was laying the foundations for a fruitful artistic path, and I was at the very beginning of my journey in curatorial practice. On the organisational team was Melanie Erixon, also a recent art history graduate, the curator of Darren’s current solo show Inaction is a Weapon of Mass Destruction, who makes an intriguing cameo appearance in the show.

The three of us were brought together by Giuseppe Schembri Bonaci, artistic director of the Mdina Biennale (which is now entering into its fourth edition). 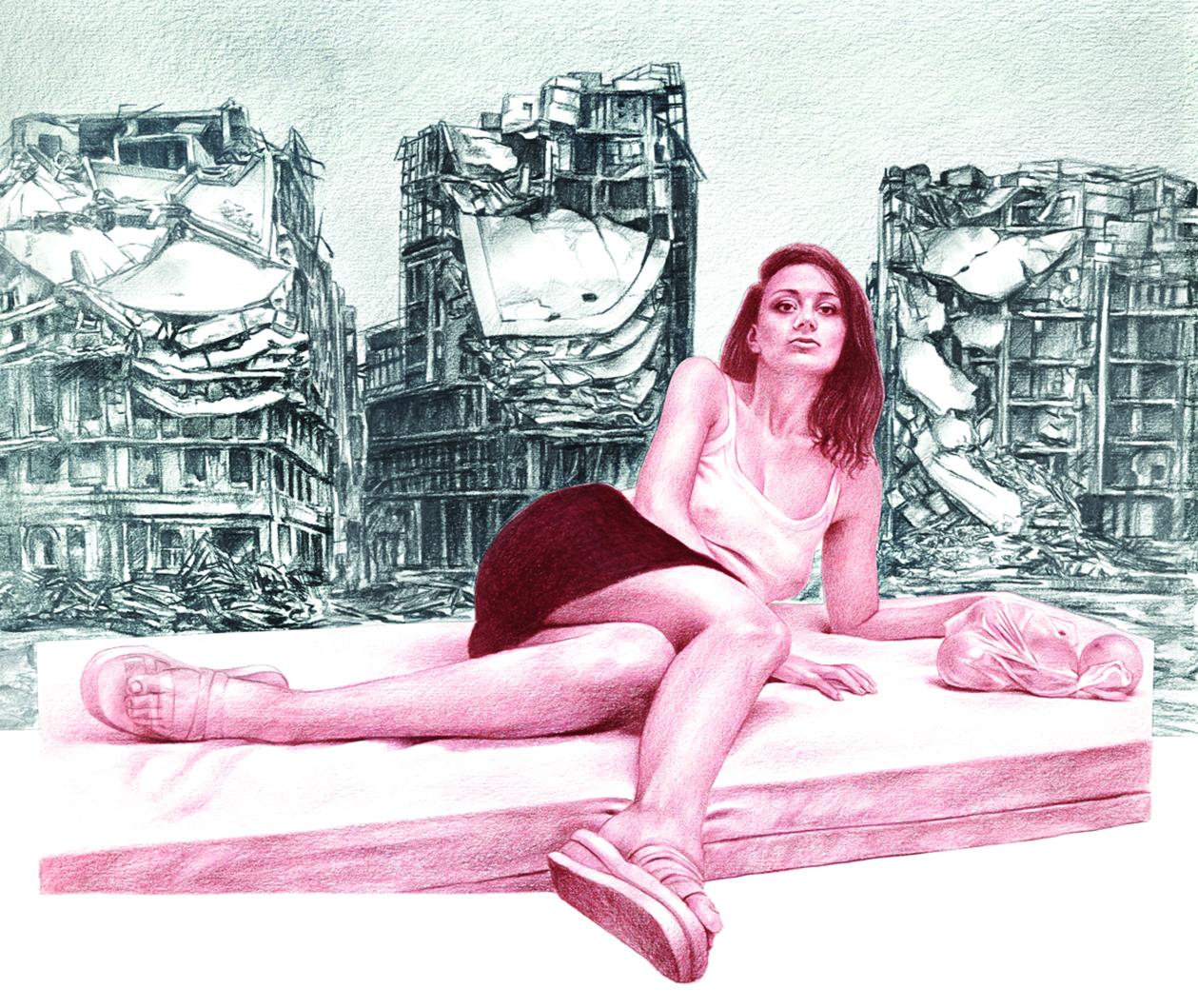 Art’s capacity to establish relationships, collaboration, and human solidarity is made evident through this poignant exhibition, in spite of its unpacking of that which threatens the planet’s existence. Death, injustice, and the insatiable allure of pop culture and social media all made a persistent reappearance in Darren’s art. These he treated with artistic virility and an aesthetic magnetism that no viewer could ignore.

His hyper-realist language speaks with profound intelligence, despite the artist’s intrigue with the superficial layer of contemporary life. The work presented here builds upon the artist’s previous projects. In 2017, Darren returned to Mdina with a large secular altarpiece that bridged the biblical with MTV misogyny. His 2020 project for the Mdina Biennale formed a direct bridge with Inaction is a Weapon of Mass Destruction, as the work Forgive us for we have Misunderstood is exhibited once more, this time evolved into an entire series integrated with technological image sharing possibilities. 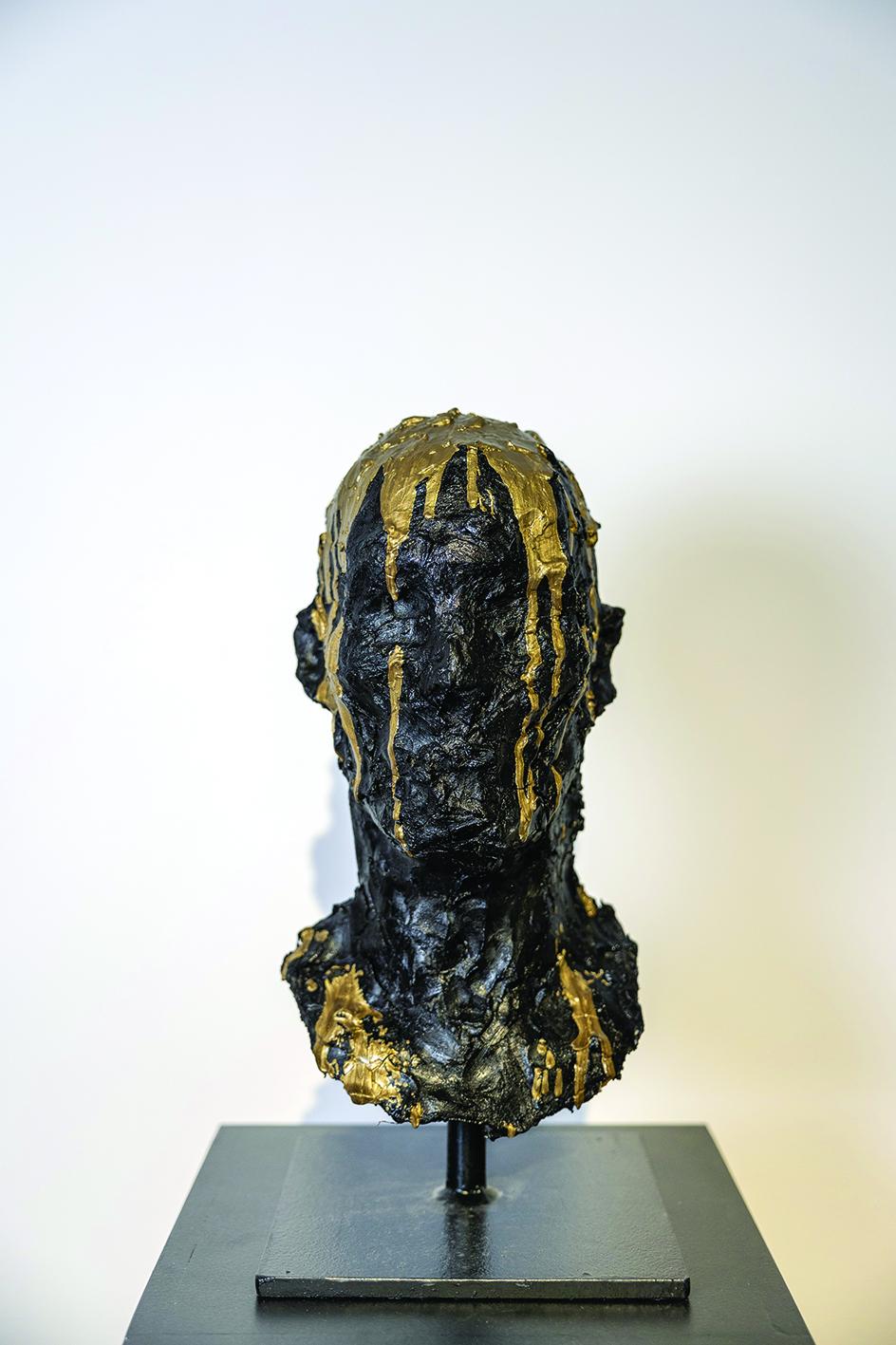 The exhibition title takes us back to Faithless’s electronic music track Mass Destruction (2004) produced in reaction to the Iraq War and the misinformation that still shrouds its motive and justification.

Darren takes his cue from the British band in his investigation of the machinations of power in manipulating and filtering truths, methods that social media users unwittingly replicate to conform to beauty standards and corporate interests. 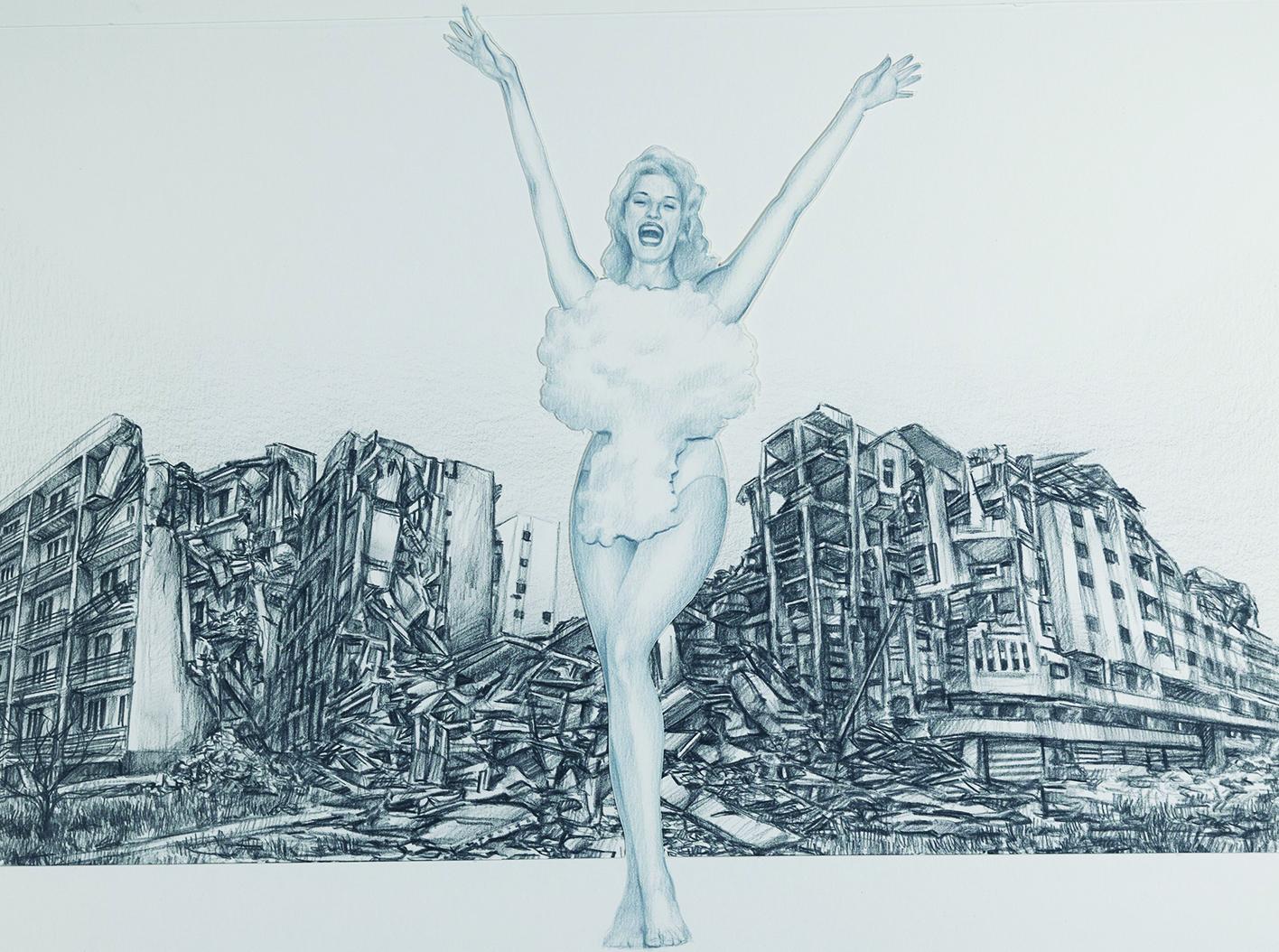 At the Upper Galleries of Spazju Kreattiv, the exhibition is divided into four rooms. In the first, the living room, or salott, one encounters pixilated imagery and Asos-aesthetics as TV entertainment, and the lure of post-work comfort as trademarked by IKEA décor, all accompanied by three large canvases. Pop culture frivolity and the threat of planetary destruction greet us, and on the perpendicular walls are painted poetic renditions of the brief life of explosions. Darren has this idiosyncratic ability to turn tragedy into a moment of beauty.

The next room is the study or office space. A reminder of the capitalist echo chamber. Boxes on heads, boxes, and more boxes, reminiscent of Marjanu Vella’s Kaxxa ħdejn kaxxa, saret kaxxa kbira, the Warholian Brillo reproduction and repetition mode of behaviour. Variations on human heads and busts are scattered throughout the show, all vacant and hollow. In (hyper/in)somnia, Manet’s Olympia lies asleep watching Netflix on a bed of monitors. Her brothel workplace is now a cemeterial office. 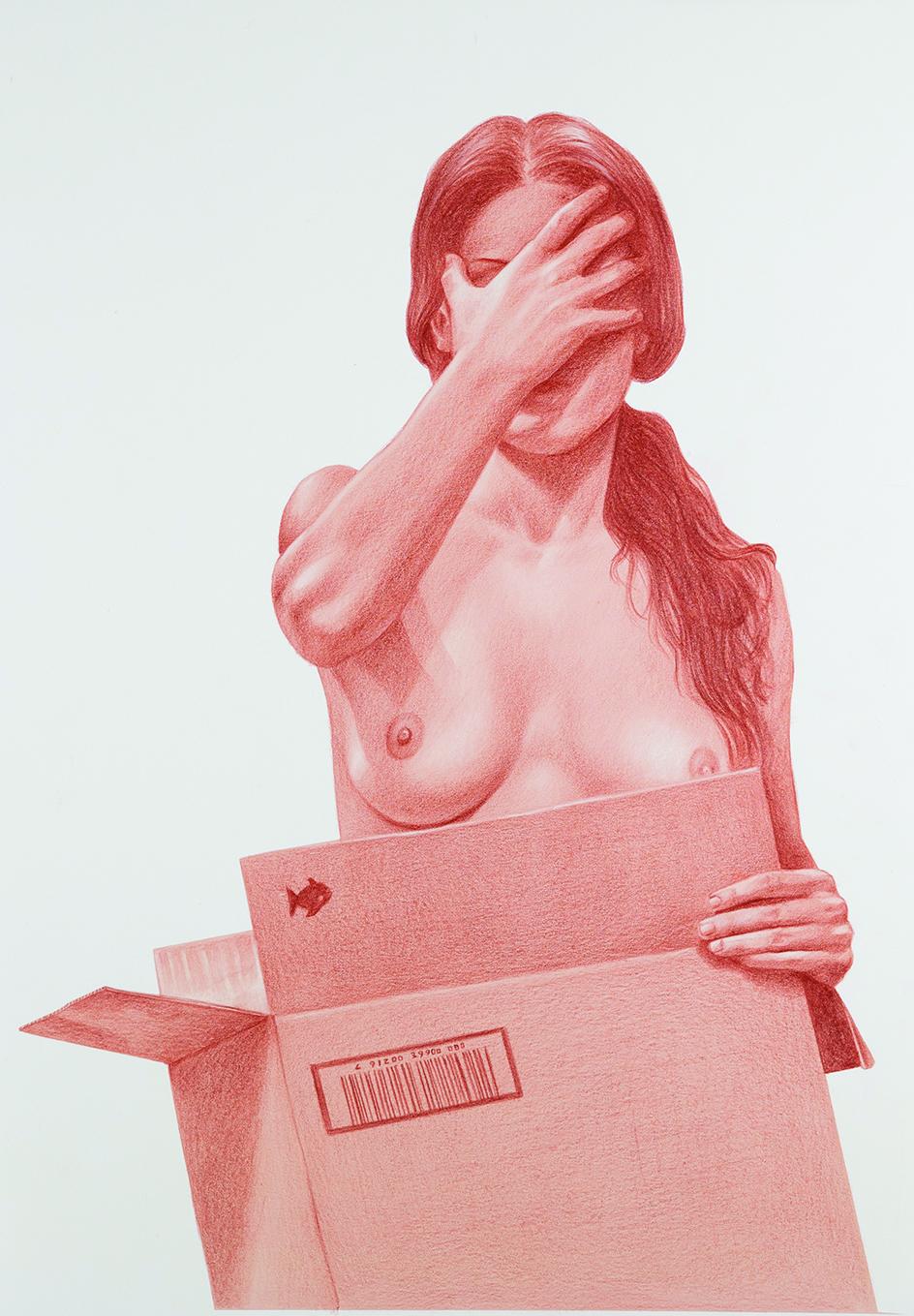 Study for the central figure in 'Three bombs'

This figure and those in the canvases bear no eyes, no gazes, and hence no connection to the outside world, portraying a sort of functional somnambulism. In Three Bombs, Manet’s Folies Bergère barmaid stands upright, naked, with her head concealed, her bar top now a mass-produced desk. The spectacle ahead has lost its urban bohemianism, replacing this with monotony and the monochrome.

His hyper-realist language speaks with profound intelligence, despite the artist’s intrigue with the superficial layer of contemporary life

In the sewing room, another reference to work and also to fashion, fabric functions to conceal, recalling Willie Apap’s persistent reference to the shroud in his 1960s corpus. The Perspex-protected drapery-laden bust, reminiscent of the Cristo Velato, acts as a memento mori – a much-needed reminder of mortality in such times of anti-ageing technology and constant virtual self-reproduction. In Eden, Eve holds her dead Adam’s skull amid a war zone. She points to the assumed tree of knowledge. The scene and skull foretell the future of her curiosity and disobedience. 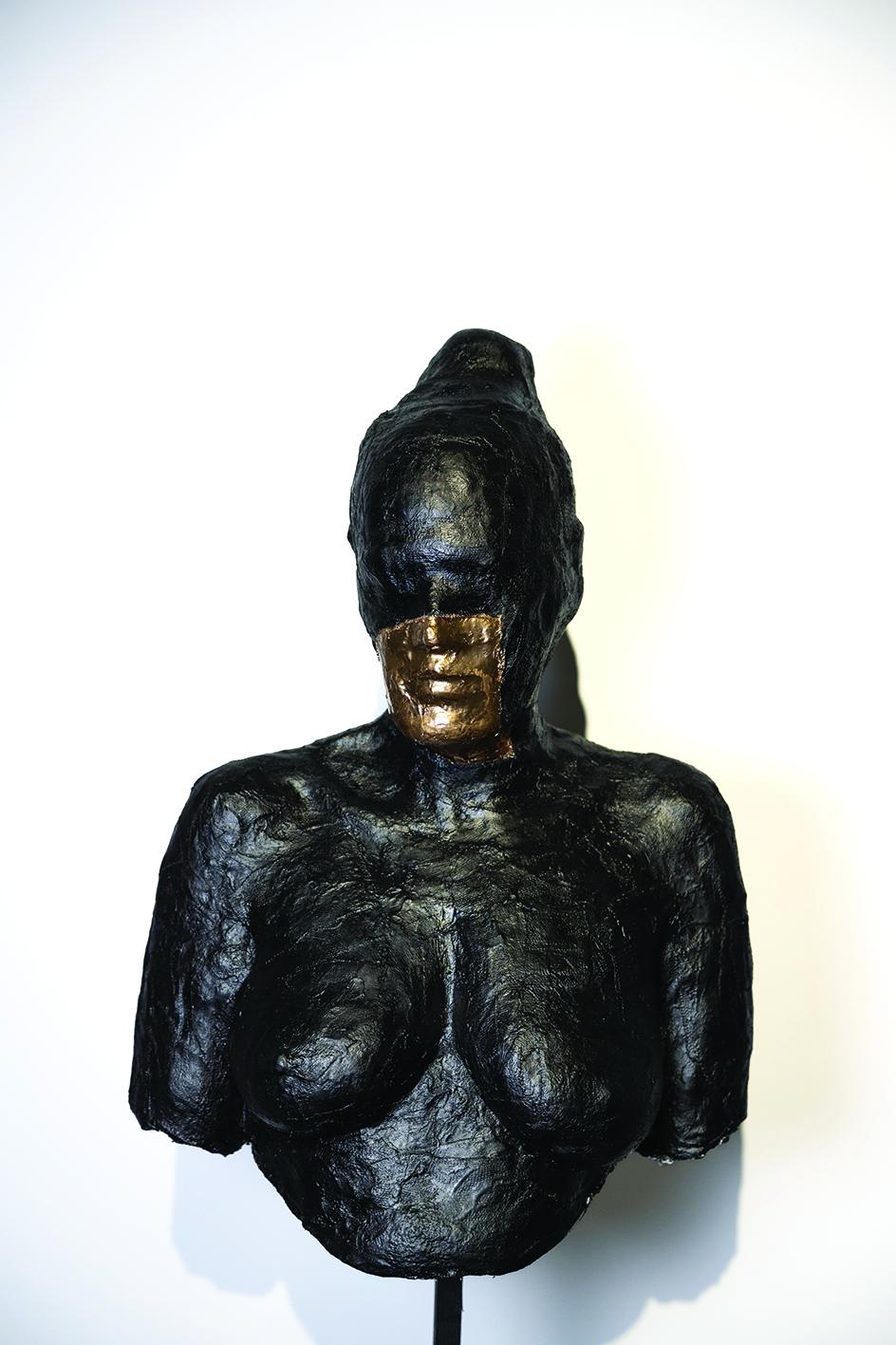 Finally, we are led to the bedroom which is divided into two sections: Abstractions and The Innocent, contrasting hyper-realism with the exploration of abstraction in painting. In Abstractions, Tracey Emin’s auto-biographical bed is here transformed into a bed of poverty, archaic electronics, and a golden laptop as the protagonist of the scene, contrasting such poverty to the value of internet connection and the promised land beyond the screen. Poverty makes an appearance in other forms. The hashtags positioned all over the exhibition are reminders of our destitute modes of communication today, as well as of the corporate takeover of communication in the use of slogans and linguistic tropes.

The futility of #sendingthoughtsandprayers is made evident in contrast to the large canvases that surround the tousled bed showing layers of reclining death: bodies on bodies, bodies and earth, skulls and gold. Hamlet’s graveyard is a constant presence throughout the exhibition and is intensified with a corner filled with burned and cosmeticised skulls. 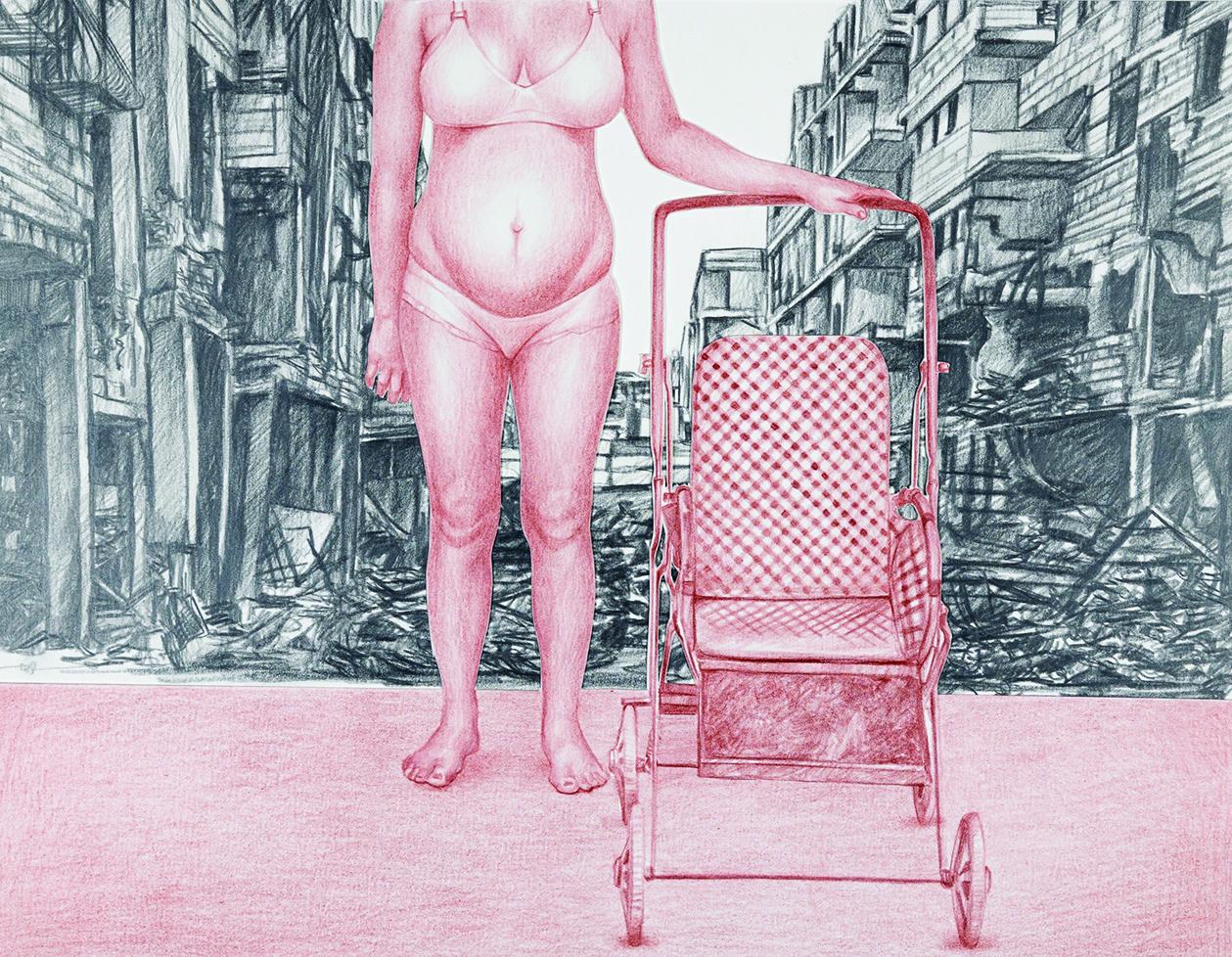 On the other end of the hall, in The Innocent section, Eden’s Eve is now pregnant and accompanied by an empty pushchair. This time, her breasts and genitals are covered by underwear. The artist shows us how Eve’s sin has placed humanity in perpetual punishment, as the creation of life is here marred by an apocalyptic scenario. The apocalypse is looming at each corner of the exhibition.

Inaction is a Weapon of Mass Destruction continues at another venue, Mqabba’s Il-Kamra ta’ Fuq, an innovative approach to present a solo show.

At this intimate space are presented the initial ideas of Darren’s work, bridging painting with video, and complementing the body of work at Spazju Kreattiv. 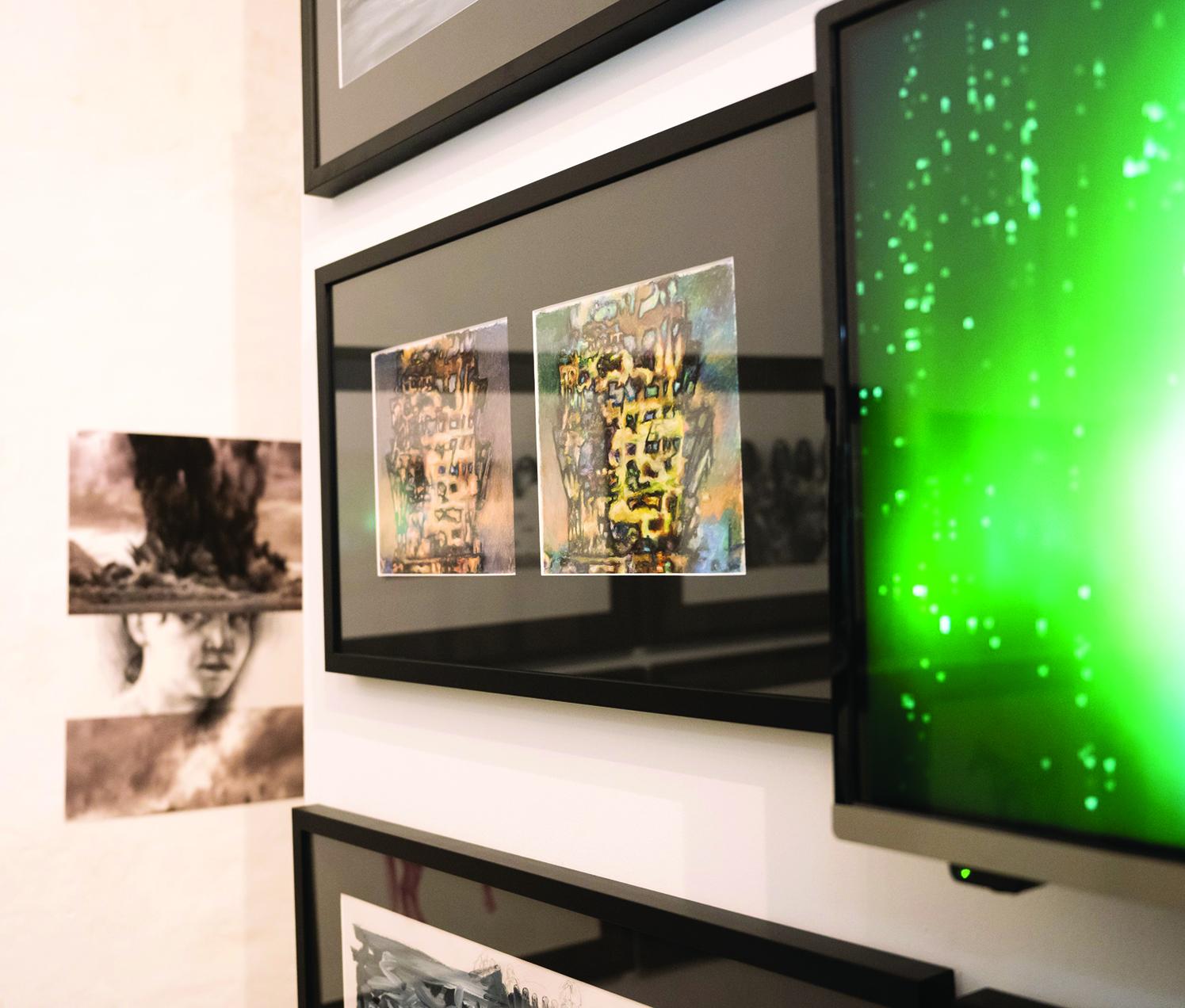 Within these rooms and in the gallery corridors, Darren shows us the tainted reality espoused by pop culture and social media and the impending nothingness of mass destruction: Picasso’s Guernica screeching horse is turned into a cute, and vapid, unicorn, rendered black and bulleted. The four self-muses are seen taking a selfie for their own self-indulgence. By presenting the coexistence of lived reality and death in each exhibition space, the artist proclaims that the apocalypse is right at our doorstep, should we wish it to enter.

Inaction is a Weapon of Mass Destruction, curated by Melanie Erixon, is on at Spazju Kreattiv, Valletta, and Mqabba’s Il-Kamra ta’ Fuq until December 4. For more information, consult the two venues’ Facebook page.