Sea Sunset Moon is a collective exhibition with works set in dialogue with the concept of solitude. Curator GABRIEL ZAMMIT speaks with Lara Zammit about how the artists contend with solitude in their works.

“A man can be himself only so long as he is alone,” writes philosopher Arthur Schopenhauer in his Essays and Aphorisms. “If he does not love solitude, he will not love freedom; for it is only when he is alone that he is really free.”

To be alone, however, is not necessarily to be in solitude – a state of self imbued with different tonalities, varying tempos… sporting two tongues and two faces.

Sea Sunset Moon – Variations on Solitude, currently on display at Spazju Kreattiv, is an exhibition curated by Gabriel Zammit featuring a collective of artists each contending with the nature of solitude, whether in its destructive or creative capacities.

Speaking to Times of Malta about this dual nature, Zammit says that the metaphors inherent to the sea, sunset and the moon are embodiments of the same dual nature of solitude, which was the primary motivator behind the exhibition. 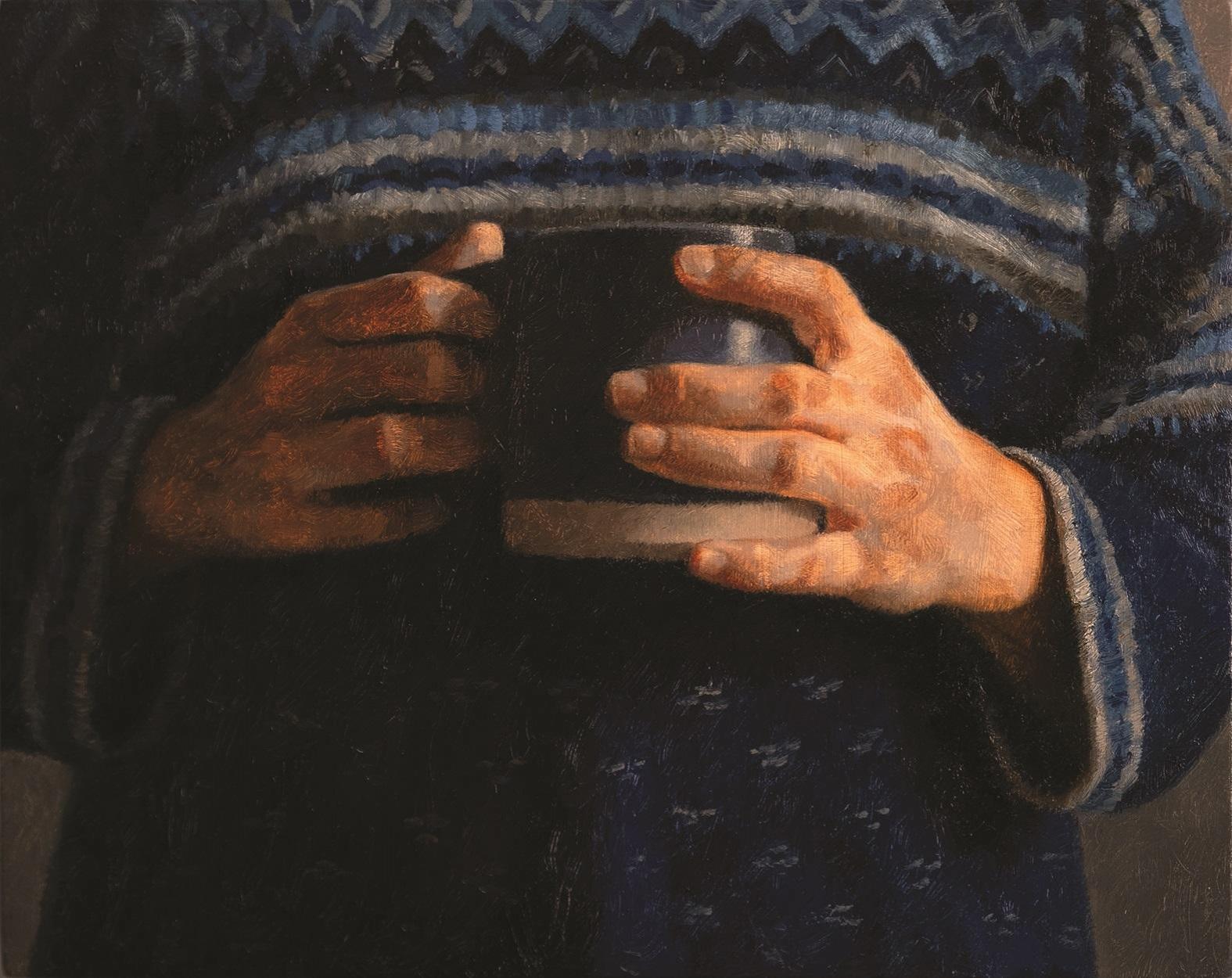 Until it is Consumed by Anna Calleja

“The exhibition is envisioned as a process of trying to understand the facets of solitude through different media and different ways of thinking,” begins Zammit.

“The sea, sunset and moon are forces that have a melancholic aspect to them, a destructive and hurtful aspect, while at the same time also having a sense of apotheosis, a sense of change or transcendence. They act as metaphors for a duality, containing within themselves and these two facets. And this mirrors solitude which on the one hand can be creative and on the other can be destructive.”

The question surrounding solitude was also partly spurred by the COVID-19 pandemic which Zammit says unleashed solitude into people’s lives like never before.

“Distance has opened up between families, between friends… people have had to contend with their own space and themselves, and solitude has become a force which has become very active and very real in people’s lives.” 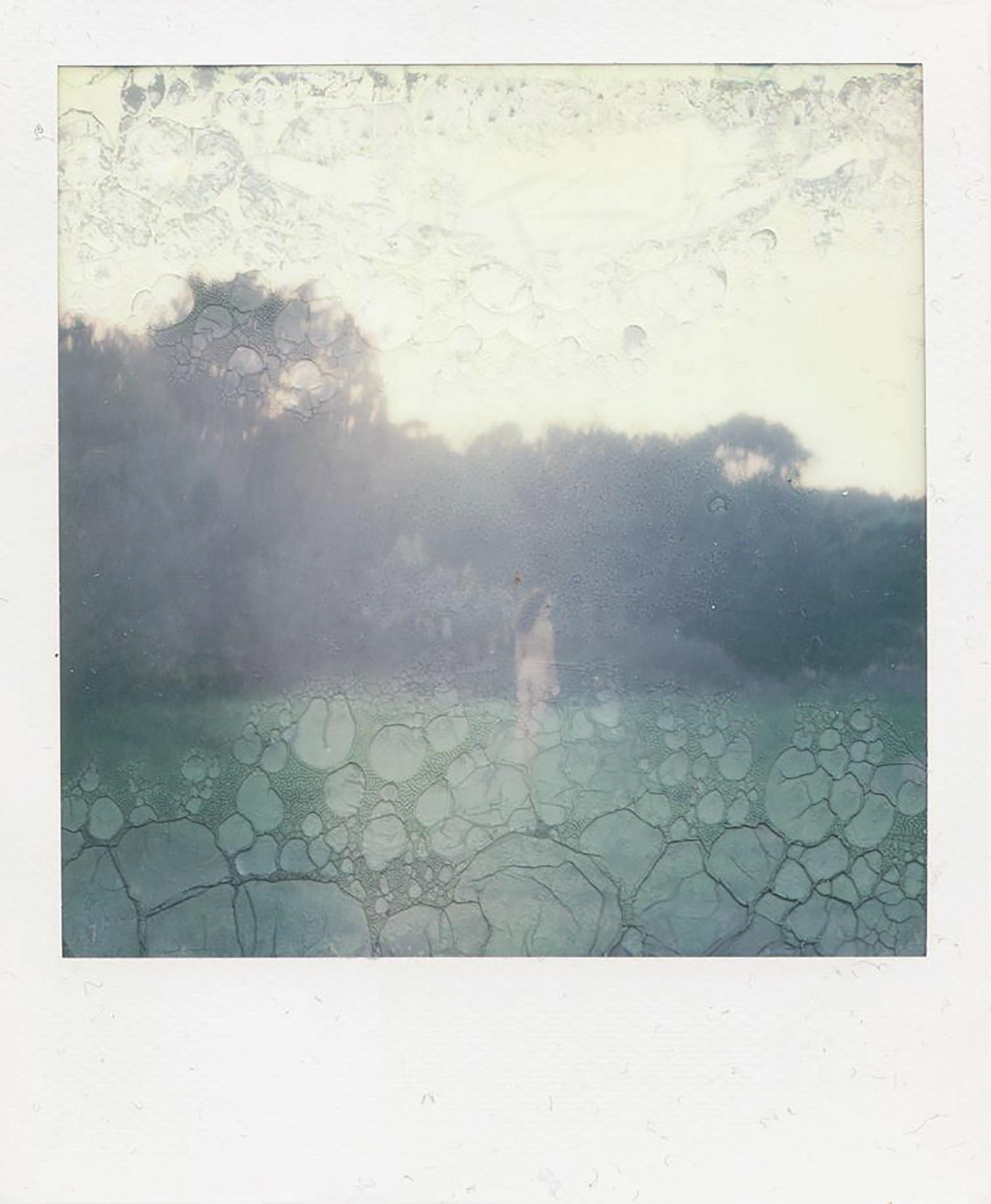 From the In-Between series by Sarah Bonaci

This in turn spurred questions about how the suffering caused by COVID-induced solitude can become creative – at what point does suffering transform itself into something more productive?

The exhibition features works by Paul Scerri, Norbert Francis Attard, Katie Sims, Glen Calleja, Anna Calleja, Chelsea Muscat and Sarah Bonaci, with catalogue essays by Ruth Bianco and Michael Zammit, each exploring solitude in one or both of its forms.

Zammit says he gave the artists a curatorial brief and then remained in constant dialogue with them, with each responding to the idea of the duality of solitude by turning pain into something creative, “turning their own internal angst, their own internal turmoil, or the turmoil which is felt around us moving from one to the other, into a work of art which manages to say something new, or which manages to be the end point of a process of apotheosis – moving out of suffering into hope”.

The artworks in Sea Sunset Moon seem therefore to embody a transformative process that dissolves initial destructive elements of solitude and transforms them into figments of hope and catharsis – creative renditions dispelling the negative charge of solitude. 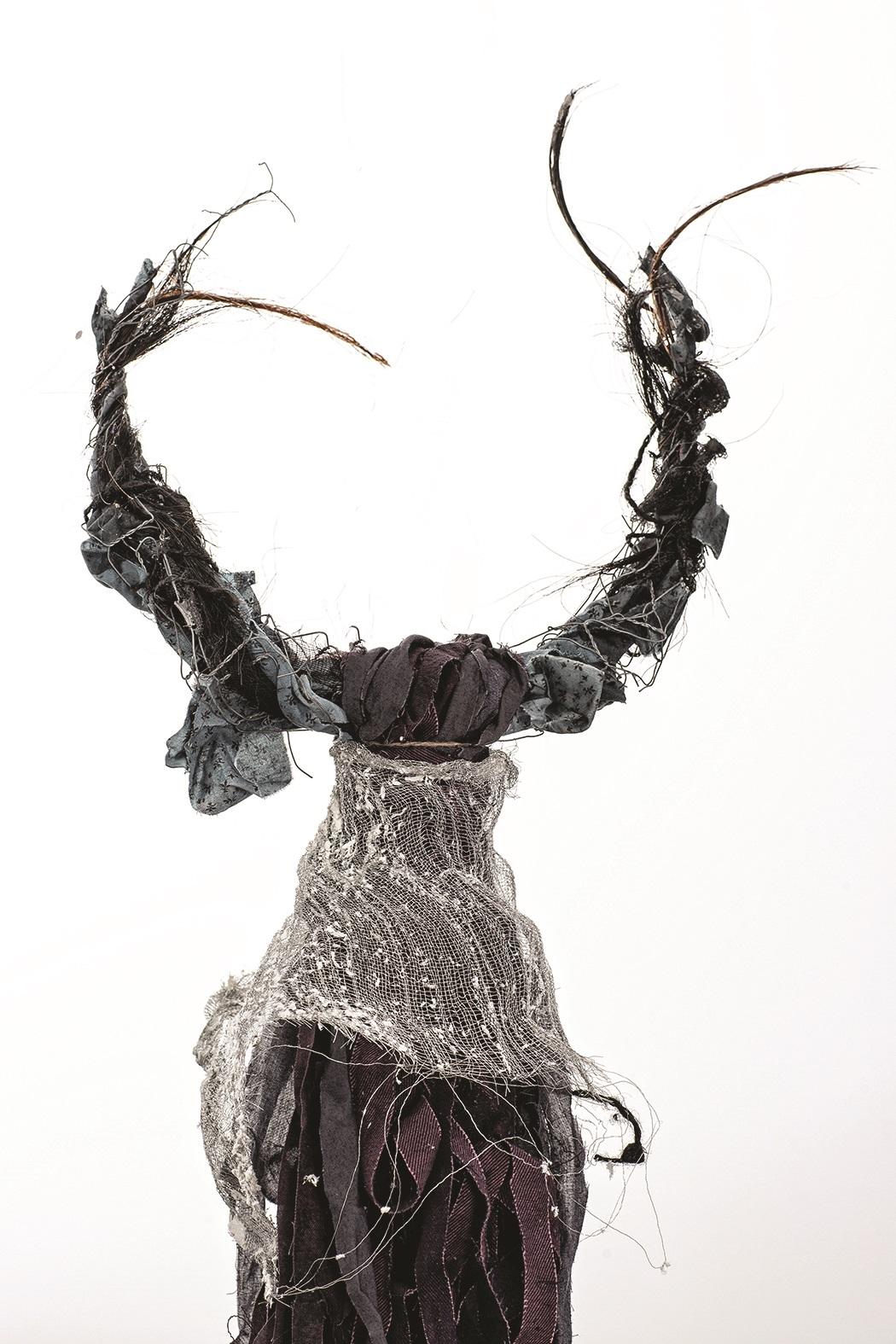 Asked whether the artworks are mainly concerned with this transformative process, thus not actively contending with solitude as something destructive but rather as something that eventually becomes creative, Zammit says that the creative aspect of solitude was more important to him as a curator than the destructive one, saying, however, that he emphasised both equally to the artists.

“Ultimately, the exhibition as a whole was focused more towards the creative rather than the destructive, somewhat in a gesture of reconciliation,” he says. One example of this is the pair of artworks by Glen Calleja titled Agnes and Karim, representing destructive, unchosen solitude and liberated, creative solitude respectively.

“The doll Agnes has a kind of chainmail around it – it’s constrained and sitting over a nest of bones. Whereas Karim is the more creative solitude as seen in the sculpture itself – it has broken free from its gauzy cloud, thus showing the rebirth that’s inherent in solitude,” he explained. 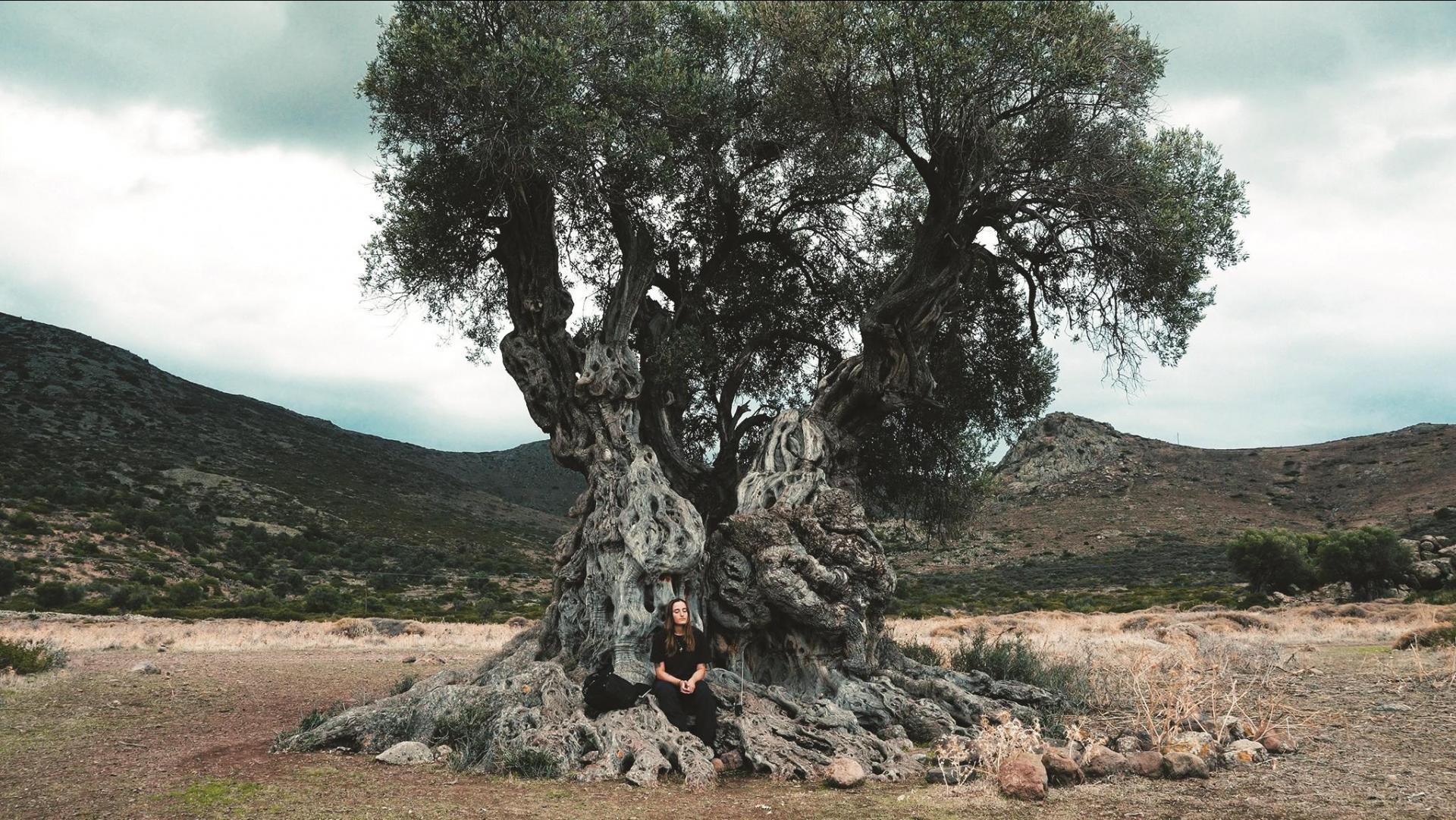 This is also evident in the photographic works of Bonaci, each of which is a Polaroid photo that has been damaged in some way, its images morphing and distorting through time.

“Sarah took Polaroid photos and buried them in sand or soaked them in acid or water. And then the photos change. Her work is about the effect of time, of solitude, of all these psychological forces on memory and identity. So, there’s this sense of dissolution. The photos change just like memories do, and like we change in our own perspective of who we are in solitude.”

While Glen Calleja and Bonnici’s works may show solitude as a process through time, the idea of confronting oneself in the face of solitude is most poignantly displayed in Attard’s work titled Surrender.

Framed as a piece of furniture with a mirrored front, the viewer seems to be invited to stop and look at himself. While in this state of arrest, the word ‘surrender’ slowly begins to illuminate through the mirror, bidding the viewer to take stock of himself and choose whether to surrender as a result of weakness or of vulnerability – destruction or creativity. 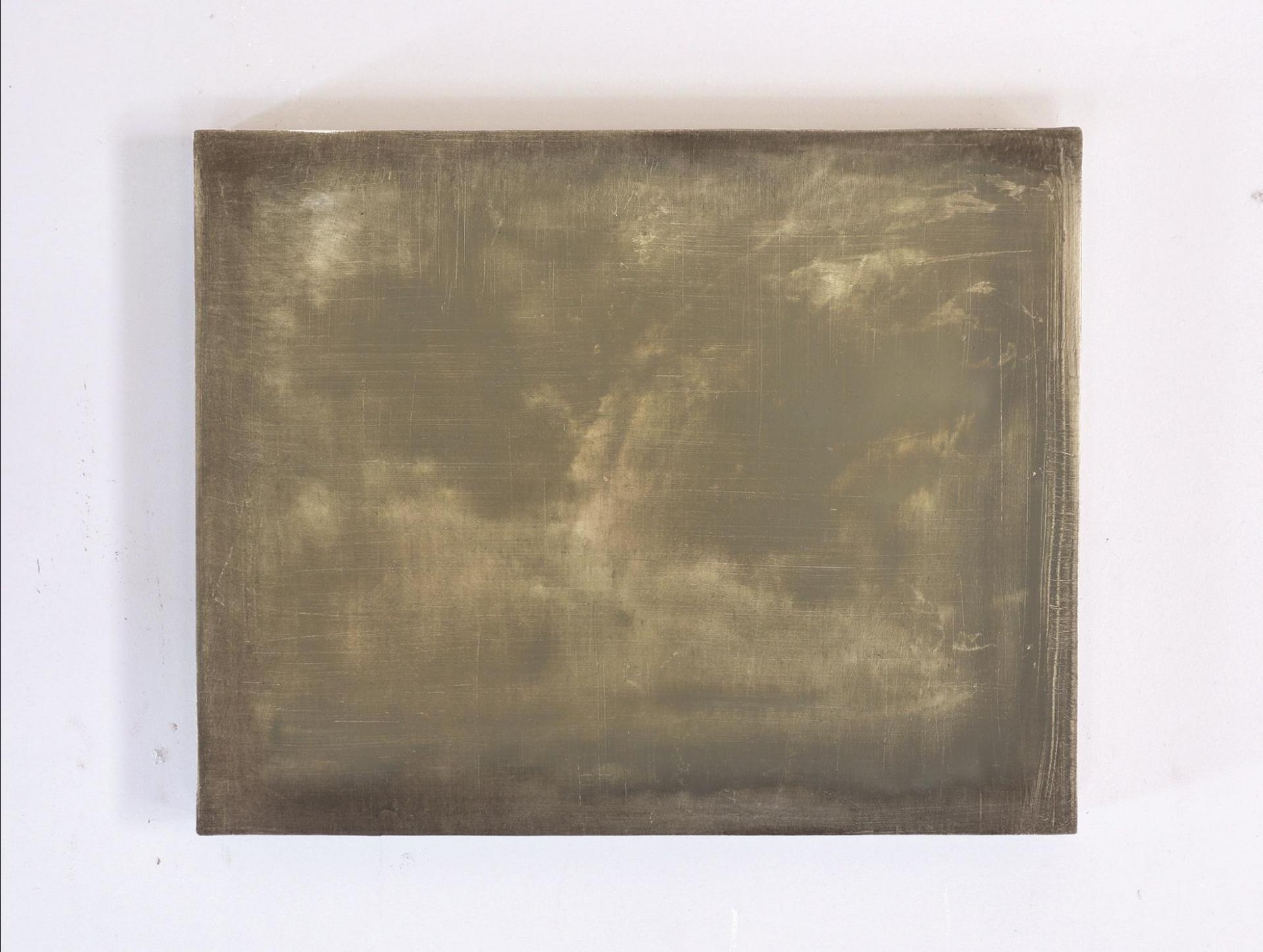 Thin Skin from the Camino series by Katie Sims

“Norbert’s work seems to be to be a single gesture, but then when you think about surrender, it can also be an arc – a process of surrendering. Surrender can be a negative thing like when you surrender to an enemy – a signal that you’ve lost. But at the same time, it can also be a creative surrender – surrendering to your pain, somehow offering it up and thus turning it into vulnerability – a position of strength rather than a position of weakness.”

Sims’s Camino series is a pilgrimage across the span of solitude, each work of which is inspired by an encounter. “Pilgrimage is a kind of a movement, so these paintings can be interpreted in that light,” says Zammit. “But each painting is also a stasis because it’s an encounter, which is unitary, but which strung together create a narrative.”

Scerri’s sculptures engage with the curatorial brief of Sea Sunset Moon in a very direct manner, each figure an allegory for these three metaphors guiding the exhibition, engaging with the contradictions of these elements of nature.

In Sea, the figure is holding a sieve to show the dual nature of this “hungry dog”, as James Reeves famously calls it. “The sieve, like the sea, is a contradictory object – it holds but it also lets through” says Zammit. “The same with Sunset – the figure is lying down because it invokes the metaphorical presence of being in bed – a place of death, birth, love, depression – you curl up in bed and you open up in bed.

“It’s this aspect that is shown in Moon as well. The moon resting on the figure’s toes is the waning moon specifically. The figure is not standing on the moon, like in Christian iconography representing the assumption. With Paul, it’s the other way round – the figure is descending rather than rising.”

Anna Calleja’s works can be seen as moments of solitude – whether of melancholia, consumption or self-reflection – but nevertheless imbued with time. 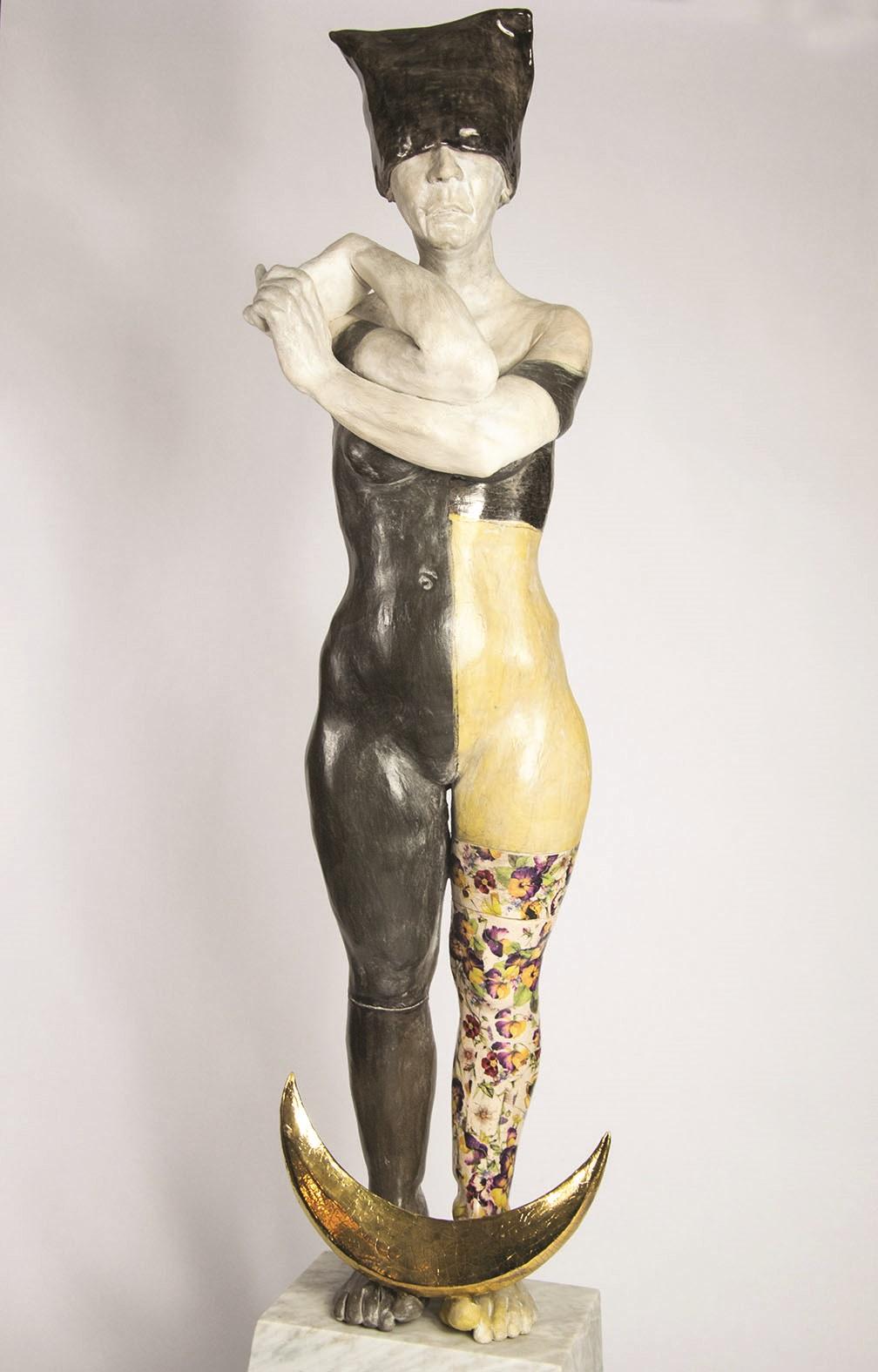 “The triptych Past, Present, Future is about self-narration – in the past there is the family and heritage; in the present, there is the crisis of self-narration caused by technology and aloneness; and then we have the future, which is about the blank page and possibility. They are moments of reflection but there’s a chronology to them.”

Finally, Zammit describes Muscat’s video artwork as a kind of a COVID-adjacent narrative about exile and loss. “In the story, she’s left alone on an island and has to come to terms with it, obviously reflecting COVID. She also mentions an abstract sickness which also reflects COVID. But the arc of it starts off with loneliness, heartbreak and loss, and it ends with reconciliation and with coming to terms with what the character is going through,” he says.

Sea Sunset Moon is a response to the senselessness and opportunity brought about by solitude in a time when we may have forgotten how to be alone.

Sea Sunset Moon – Variations on Solitude is a Spazju Kreattiv commission running until May 8.