The tumultuous journey of a family from Malta to Tunis to Marseille that started a century ago is the subject of an exhibition currently on at Spazju Kreattiv, in Valletta. It is told through the eyes of a fourth-generation member of the family via photos, mementos, original documents and audiovisual means.

“The exhibition is based on a true story, my family’s story, from my father’s side,” French artist Katel Delia says.

“My grandfather was born in Żejtun. His complex journey of migration started when he was six years old, when his parents decided to move to Tunisia with their children in the hope of finding a better life. This was one century ago. There, they found themselves in some difficulties and asked for repatriation to Malta.

"However, a year later, my bużnanna (great-grandmother) went back to Tunisia with her children while her husband stayed in Malta,” she relates.

They opened a shop there and all seemed well until trouble started brewing a few years after Tunisia acquired independence.

“The political situation was hostile to foreigners. My family was pushed to leave Tunisia. In 1961, my grandfather decided to return to Malta with his four children, my father included. The return to their home country was not easy either since they had to face long and bureaucratic administration procedures.” 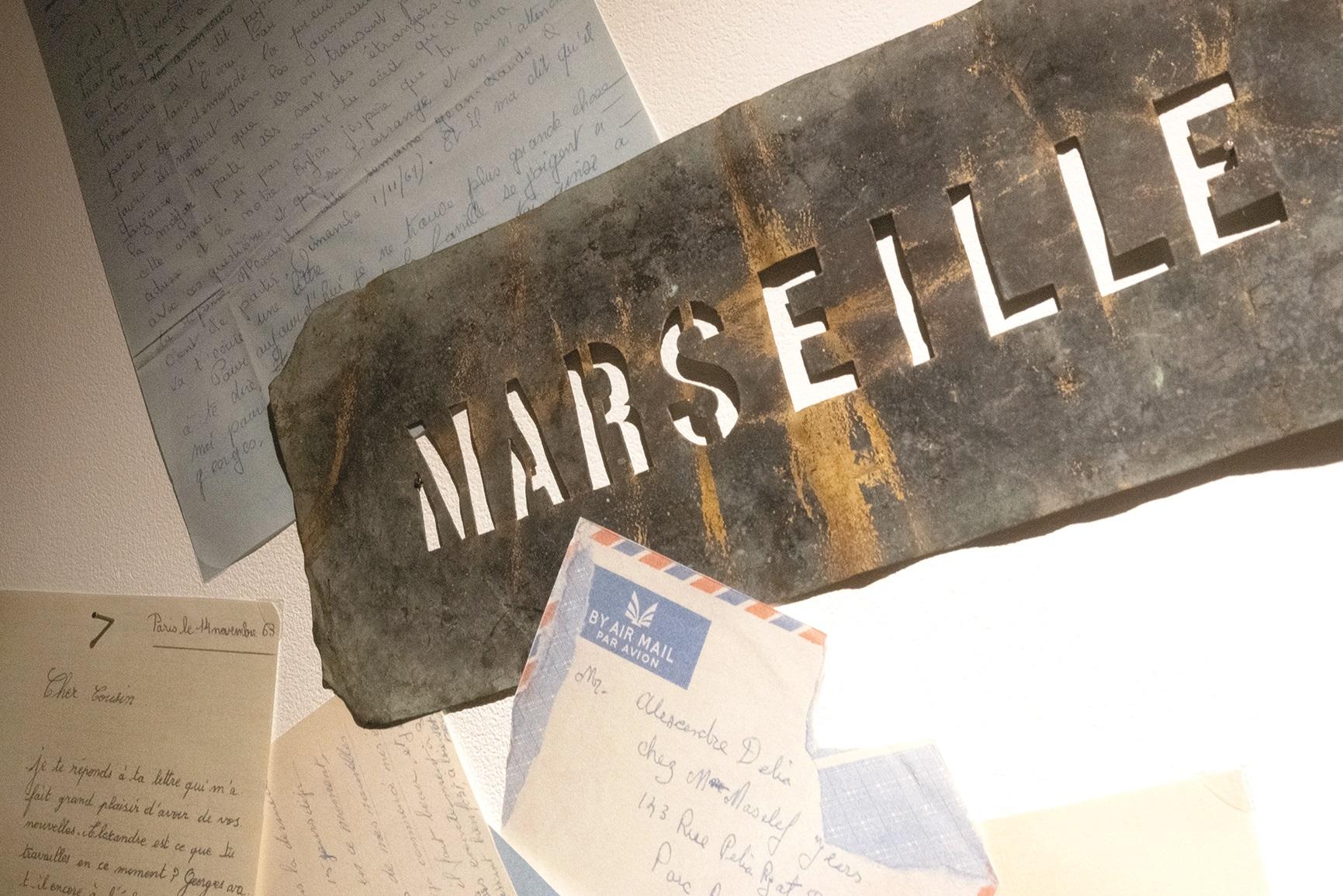 Two years later, they tried their luck in Marseille. But Katel’s grandfather faced administration procedures again as he was born in Malta. His wife and children were spared as they were all born in Tunisia, at the time a French protectorate, which meant an automatic right to stay in France.

“After a few years, my grandfather gave up and the whole family went back to Malta. My father, however, stayed in Marseille.”

The artist has been interested in her family’s story since she was young.

“For a kid, knowing your family travelled around different countries is unique, a very good story to share. But, back then, I did not know how painful it could be to leave a country you think of as your home,” she admits.

“By time, thanks to my inquisitiveness, my father and some other family members shared with me their past but, like every biography, written or otherwise, they were partial; some parts were hidden, maybe they were too painful, maybe forgotten, or maybe deemed as irrelevant.”

When Katel settled in Malta five years ago, she was surprised that the Maltese migration to North Africa was “forgotten”. She was also shocked to learn that teenagers did not know much about contemporary history.

“Knowing our past is key to make us understand our present and is the base upon which we build our future,” she asserts.

Putting her family’s story together for the exhibition was no straightforward feat. She had some family photographs and mementos which her family had luckily preserved over the years. Before her father died 11 years ago, Katel used to ask him about life in Tunisia and his migration journey. She used to write down his stories and even drew some of the objects he had kept.

In 2017, she travelled to the Dream City Festival in Tunis, where she decided to visit some places where her family used to live. 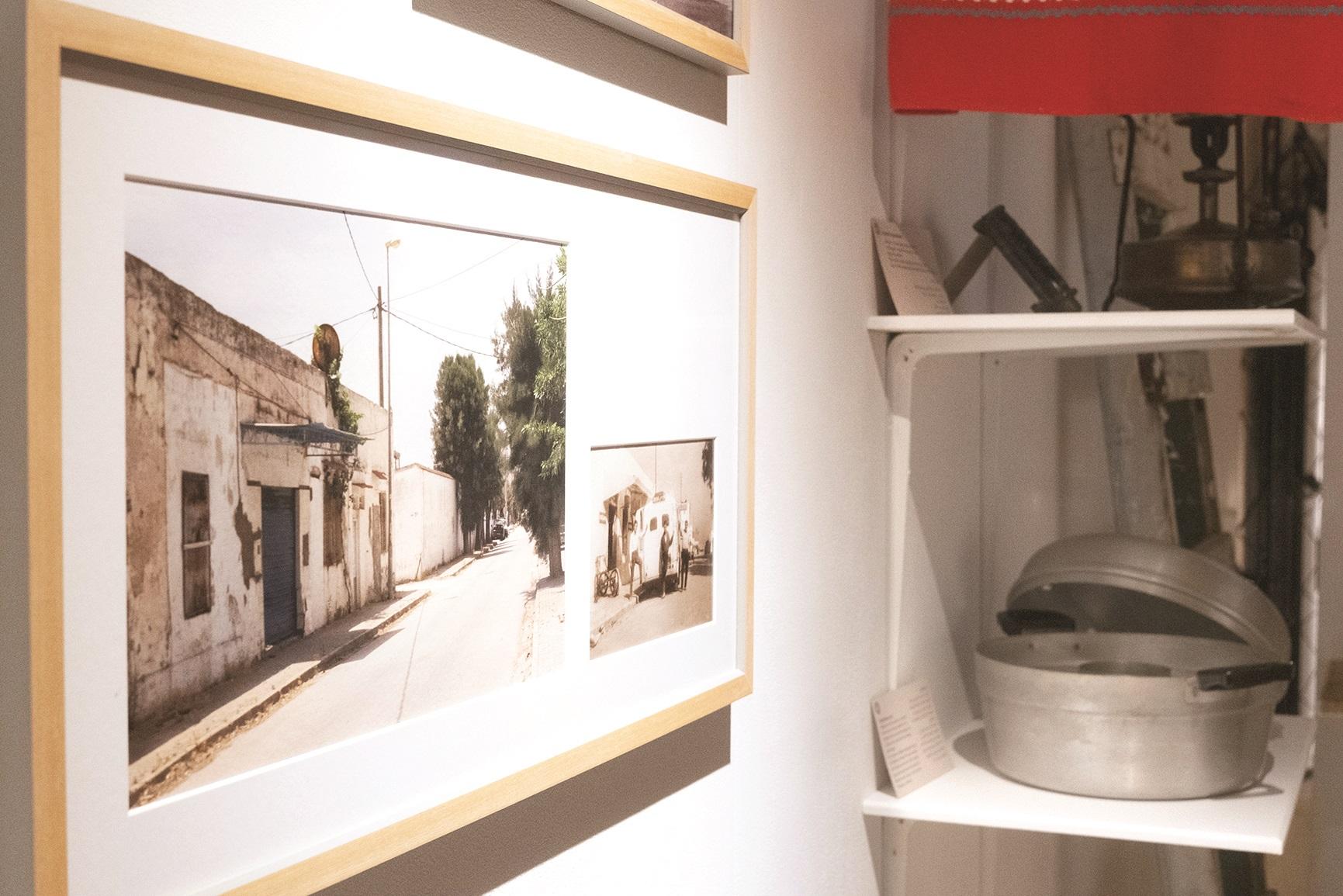 “I had my first shock when I entered a shop to buy a drink. The shop’s interior was really similar to the one of my grandfather’s. I bought my drink, left the shop but returned immediately,” she recounts.

“I showed the photo of my grandfather in his shop to the lady behind the bar and asked her if I could take a photo of her in her own shop. She accepted. These two photos served as the starting point of my project and are shown as a photomontage in the exhibition.”

Katel also had some passports and addresses, which helped her during her research at the National Archives in Malta.

“There, I found that the immigration journey was more complex than what my family used to narrate to me,” she said, while adding that she also conducted research in the archives of Tunis and Marseille.

She also needed to understand the political and historical context, so she read books and searched the online archives of the Times of Malta.

“With Raphael Vella, the curator, we decided to share those newspaper pages with the public. Newspapers and news are part of our daily life. The articles selected are short but, at the same time, detailed enough to understand the context and to discover that even Maltese people were not welcome back in their own country,” Katel notes.

The resulting exhibition provides an immersive experience, which helps one live the story yet “feel at your own home”.

Malta – Tunis – Marseille has different layers, with visitors likely to peel those that appeal most to them.

“They may also find some I have not yet noticed,” Katel quips.

She believes that it is the combination of different mediums that delivers her family’s story best.

“People may be moved by a photo which they could see themselves in, maybe by the voice of the little girl calling her grandmother in Malta, the short film Validité prolongée in which, through my camera and thanks to Les Archives des Bouches-du-Rhône in Marseille, I visit the plan of my family’s apartment in Marseille.”Some objects in the exhibition may also bring back a lot of memories.

“I love it when through them they share anecdotes with me but I love it even more when they transmit those anecdotes to their children or grandchildren. The exhibition is for everyone. Once I met three generations of women from the same family,” Katel continues. 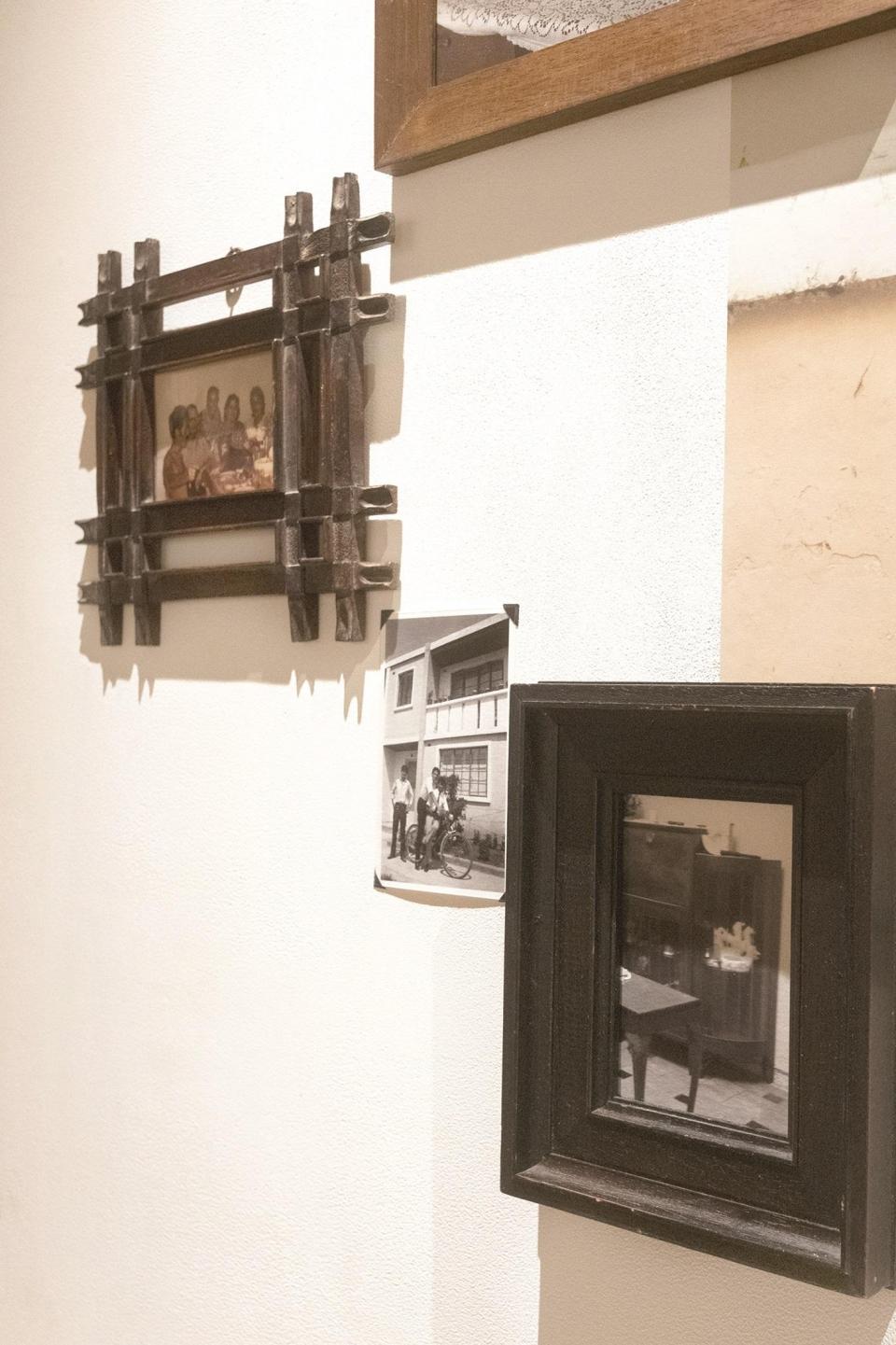 “One may realise that such an intimate, personal story may reflect one’s own story and it is moving to discover more about yourself through someone else.”

A selection of her work exhibited at Spazju Kreattiv, consisting of diptychs and triptychs based on family photos and contemporary photographs she took in Tunisia, was awarded the International Prize at the Contemporary African Photography (CAP).

Thanks to this prize, an extract of the series made in Tunisia will be exhibited in various international photo festivals. The work will be also published in a book, alongside that of other winners. A small edition of the photos will be reproduced and sold.

“Having my work shown around the world is a fantastic privilege and gives me more visibility. As an artist, creation is an important part of the job but promoting it and exhibiting it is also important,” Katel remarks.

Her next goal now is to set up the exhibition in Tunisia and Marseille, where more people are sure to relate to the story of Katel’s family. Others may better understand the reality of what people go through when migrating.

“My family was modest and, like other migrants, they went in search of a better life. Initially, they did find a better life in Tunisia and were doing well with a shop to their name and friends from different communities, however, it was short-lived and they were forced to leave. The return to Malta was as painful. Still, they were not disheartened and, one fine day, they decided to move to France. The hope of bettering oneself never fades,” Katel says.

“Immigration has always existed and will continue to exist. At times, a country can be a host country and later it could be the country we flee. We should have more empathy for all people who migrate without any distinction.”

Malta – Tunis – Marseille runs at Spazju Kreattiv until October 31. Katel Delia will be leading a tour of the exhibition on Saturday at 5.30pm. For more info, visit www. kreattivita. org. The project is supported by Arts Council Malta, the French Embassy and ILAB Photo. 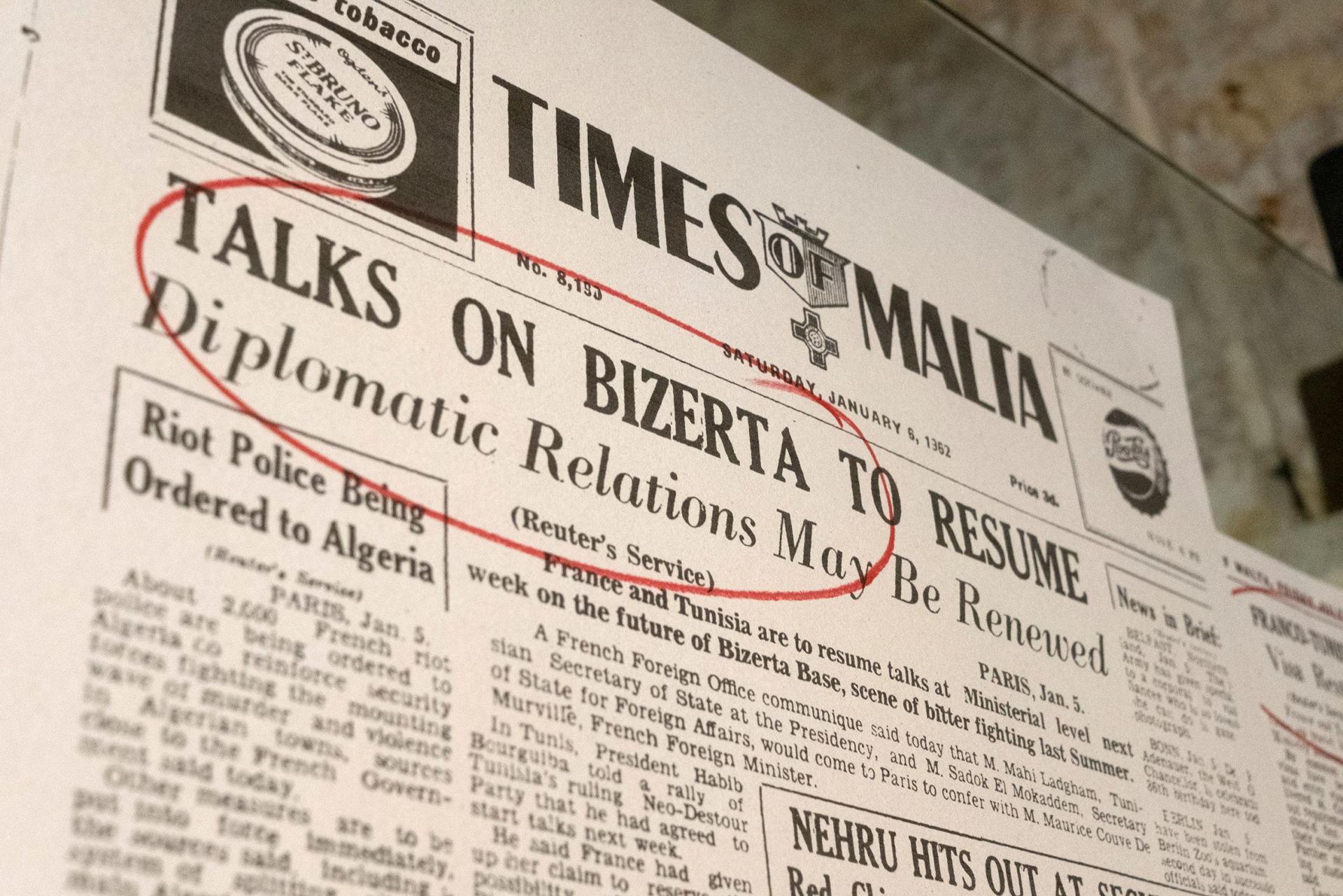 The artist’s own story

Katel Delia, also known as Katelia, was born near Paris but, at the age of three, her parents decided to move to Brittany, where her mother had family roots.

As a teenager, Katel often went to Paris to visit her mother’s family. While there, she used to visit museums and art exhibitions. After five years of studies in a fine arts school, Les Beaux-Arts, in Rennes, she decided to try her luck in Paris.

There, she studied digital technologies for a year at Les Gobelins and, in 2000, she landed a job in a web agency.

Six year later, she decided to go freelance in order to be able to select projects that pertained to her life philosophy and also to dedicate more time to her art practice.

Thanks to an open art studio in her Parisian neighbourhood, she exhibited her photographs to the public for the first time around 10 years later. She then applied to take part in the Mdina Contemporary Biennale of 2015-16, where her photographs were once again exhibited.

Five years ago, she moved to Malta, but still travels often to France.

Her work was featured in various photo festivals in France in 2020-21.

Recently, the International Prize for Contemporary African Photography 2021 – CAP Prize awarded a selection of her work currently exhibited at Spazju Kreattiv. Being an international prize, it helps Katel feel more confident to continue practising her art.