Senior members of Yemen’s exiled administration flew into Aden yesterday to make preparations for the government’s return, an official said, three months after being pushed out by the armed Houthi group.

The visit by ministers and intelligence officials follows military setbacks for the Houthis at the hands of Saudi-backed Yemeni fighters which may mark a turning point in the conflict that has killed more than 3,000 people.

The southern port city of Aden has been a focus of fighting since the Houthis first laid siege to it in March when it was home to the government which subsequently fled to Saudi Arabia.

“[Exiled President] Abd-Rabbu Mansour Hadi delegated this group to return to Aden to work to prepare the security situation and ensure stability ahead of a revival of the institutions of state in Aden,” a local official said after the group arrived by helicopter at a military air base.

The delegation included the ministers of the interior and transport, a former interior minister, the intelligence chief and the deputy head of the house of representatives.

Local fighters have wrested Yemen’s airport and main seaport from the northern militia group in the past two days, in fighting that killed dozens of people, according to medics.

By yesterday afternoon, Saudi-backed militiamen battled their way into the centre of the Crater district of Aden, the spokesman for anti-Houthi forces in the city said. 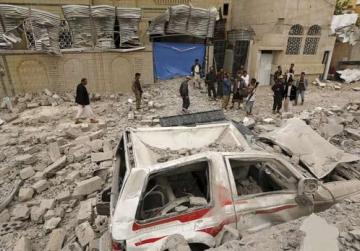 Houthi militants and people gathering at the site of a Saudi-led air strike in Yemen's capital Sanaa yesterday.

“The Popular Resistance... entered the Maidan area in the heart of Crater and are in the process of clearing the streets of remaining Houthi elements,” Ali al-Ahmedi said, adding that dozens had been killed on both sides.

The Shi’ite Muslim Houthis seized Sanaa in September and pushed into Yemen’s south and east in March and April in what they say is a revolution against a corrupt government and hardline Sunni Muslim militants.

In a statement posted on Houthi-controlled state media, the group said it was weathering the Aden offensive, which has been supported by air strikes by a Saudi-led coalition which seeks to return Hadi to power.

There is daily, ongoing coordination to push the operations forward

“Over 150 air strikes did not deter the advance of the army and popular committees in achieving victories against the elements of extremism, al-Qaeda terrorism, Hadi militias and Saudi mercenaries,” news agency Saba quoted a pro-Houthi military official saying.

Residents said they were starting to clear rubble and piles of trash in the districts won from Houthi fighters which were spared street battles for the first time in over three months.

The local fighters said they had put under siege the two main districts still under Houthi control, and that Arab coalition ships had shelled a main checkpoint outside the city.

Arab countries, particularly the United Arab Emirates, have shipped around 100 armoured vehicles to the war effort, they said.

Backed by Saudi-led air strikes, militia officials said they were also advancing towards one of Yemen’s most important air bases about 50 kilometres north of Aden.

Brigadier General Ahmed Asseri, spokesman for the Saudi-led coalition, said the gains were a joint effort between local fighters, army units, the exiled government and the alliance.

“There is daily, ongoing coordination to push the operations forward... on the level of information, military training and especially supporting the air operations to achieve results on the ground,” Asseri told Saudi Ekhbariya TV.

The United Arab Emirates said yesterday that one of its soldiers had been killed while fighting with Saudi-led forces in Yemen.