Have you ever fantasised about poisoning someone? Be honest. Well, if you have, you will, perhaps, feel a little less ashamed in knowing that you are not the only one. Testament to this is the notorious ‘Poison Garden’ sprawling, beautiful and deadly, right in the middle of the gardens at Alnwick Castle in northeast England.

I must admit that when I first visited Alnwick Castle, my main motivation for going was the fact that it was one of the main castles used to portray Hogwarts School of Witchcraft and Wizardry in the Harry Potter movies. Fandom apart, I love exploring castles whenever I’m abroad and while reading about the various historical attractions one can find in Northumberland, of which there are many, Alnwick caught my attention for many reasons.

Originally built during the 11th century, Alnwick Castle is the second largest inhabited castle in England being the seat of the Duke of Northumberland, who with his family, actively occupies part of the castle to this day.

While trying not to buy too many souvenirs at the gift shop, right after we had purchased our tickets, I was amazed as I looked through the free visitor’s map and pamphlet they had given us, realising how much we had to explore.

Although the castle itself was enormous (all the different parts were labelled in a diagram), the gardens seemed almost to dwarf it, featuring several differently themed sections formally landscaped around a central water cascade. The pamphlet promised a bamboo maze, a large wooden tree house, a number of water fountains and features, a cherry-tree orchard complete with tree-swings, a deer park and many other attractions which I couldn’t wait to see, however what really piqued my interest as soon as I read the sinister-sounding title on the tiny map, was ‘The Poison Garden’.

After asking about it at the gift shop, I was told that this garden was always kept under lock and key, due to the dangerous plants and flowers growing inside and that one could only enter with an official guide at various prescribed times.

Fortunately, the next guided tour was scheduled to start within 15 minutes, so off we went to find the entrance. The cloudy sky and intermittent rain seemed to be the perfect foil for such a grisly tour and as we waited in front of the iron-wrought gate with a number of other visitors huddling underneath rain-jackets and umbrellas, I couldn’t help but wonder at the giant lock and painted skulls warning us off.

Finally, a lady with a jolly smile greeted us, cautioning us against touching anything within  the garden once we were inside. This, she said, was because every tree, plant, leaf and flower inside was highly poisonous, not only through ingestion but even through touch. The gate was opened and we filed in slowly, only to have it clang shut behind us and padlocked once more. 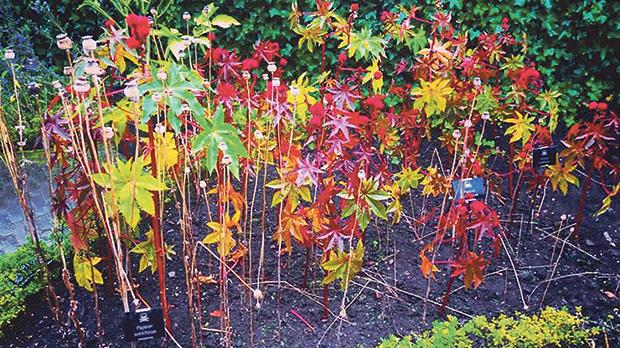 Every tree, plant, leaf and flower inside the garden is highly poisonous.

The first thing we saw as we shivered in the rain and waited for the guide to start explaining the different plants to us, was a large black coffin. Smiling, our guide told us that even though it was not Halloween, that coffin was always there as a warning and to further set the stage for a number of macabre stories relating to the venom-filled bulbs, roots and plants found inside.

The use of poison dates back as far as spiritual and mythical beliefs have been recorded. Our ancestors knew much about the power of plants. They knew not only which parts of the plants were poisonous, but also what quantities to use to kill, cure, drug, or relieve pain.

The multicoloured trees, shrubs and flowers within the Poison Garden glittered sensuously with rain-drops as we made our way around them while hearing stories about their various uses and the gruesome incidents and murders caused by the plants, which had been historically documented.

The pretty blue flowers of Monkshood, also known as Wolf’s Bane, had been used to poison enemy water supplies during times of war in ancient Europe and Asia, which caused numbness of the throat, intense vomiting, diarrhoea, muscular weakness, spasms, paralysis of the respiratory system, and convulsions which could be fatal.

Yet another innocuous-looking shrub was revealed by our guide to be ‘wormwood’, which is one of the ingredients used to make Absinthe. Sporting tiny yellow flowers, wormwood is both a hallucinogenic and an emetic, it is in fact banned in most countries.

Although the ancients knew how to use herbs and plants to heal, it was very easy to misconstrue their dosage or use, thus resulting in a number of ailments and deaths.

Belladonna, also known as deadly nightshade, is well-known today to be made of foliage and berries which are highly toxic, however Venetian ladies used the juice from this plant as a cosmetic. It was, in fact, distilled as eye drops with the aim of enlarging and darkening the pupils, making the eyes look larger and more mysterious, hence the name ‘bella donna’ which means ‘beautiful woman’ in Italian.

The guide told us that the poison in this pant is so effusive, that just three of its tiny sweet-tasting shining black berries are enough to kill an infant.

Our guide also explained that many of the poisonous plants found within the garden at Alnwick grow avidly in the wild and can be erroneously ingested by a pet or child left unsupervised.  Even the common daffodil, that is the narcissus, can be poisonous, since the bulbs contain toxic alkaloids.

As we walked even deeper into the garden, I noticed that one small section in particular was dramatically cordoned off with chains. Seeing me looking at it in undisguised curiosity, the guide smiled and showed us the small sign at its edge. This in fact, was the ‘illegal drug’ section.

The Poison Garden at Alnwick was often a site for teachers and parents to bring students and children, in order to educate and caution them on drug abuse and the misuse of illegal substances.

She assiduously pointed out that all the illegal plants found in this part of the garden, such as marijuana (cannabis) which is a hallucinogen and cocaine, which causes nose ulcers, convulsions and depression, among other effects, were grown with express permission from the government under a Home Office licence.

Other commonly-found poisonous plants we saw and discussed during our visit included bluebells and snowdrops, whose bulbs are very poisonous when ingested and which can cause nausea, diarrhoea and vomiting.

There was also common Juniper, whose berries can be fatal in small amounts; prickly lettuce, which is a sedative and can be addictive; oleander, which is highly toxic and may cause skin irritation if touched, and death if eaten; the opium poppy, which is a source of morphine, laudanum and heroin; and the tobacco plant, whose nicotine effects are well known.

In other words, if you find yourself walking along a wild garden or forest, be very careful what you smell, touch, or put in your mouth, because even though something may seem pretty and innocuous, appearances can be deceiving! 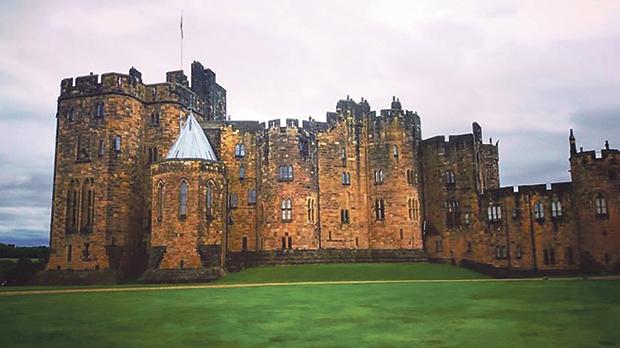 The exterior of Alnwick Castle.