Millionaires looking to buy a Maltese passport would spend an average of 16 days in Malta during their mandatory one-year residency period, a cache of Henley & Partners documents show.

The documents raise serious questions about the "genuine link" requirement introduced as part of the scheme. They reveal how wealthy applicants could reduce the time they had to spend in Malta by joining a local club, donating to charity, buying a yacht or taking up a newspaper subscription.

In some instances, passport applicants flew in and out of Malta within 24 hours of swearing an oath of allegiance to the country, its constitution and its people.

The details emerged from an investigation carried out by Times of Malta as part of the Passport Papers project pertaining to the Investigative Journalism for Europe (IJ4EU) fund and coordinated by the Daphne Caruana Galizia foundation.

A typical itinerary of an Individual Investor Programme client would often see applicants fly in and out of Malta within the space of a couple of days, with the express purpose of picking up their residency card, opening a bank account, signing documents and other formalities that required their physical presence on the island.

Watch: Jacob Borg explains how a mandatory residency requirement was reduced to a box-ticking exercise.

The one-year residency period prior to passport applicants becoming Maltese citizens was introduced in 2014 to appease the European Commission following grave concern about the scheme across Europe.

The scheme’s regulator had flagged at the time how the residency requirement remained a “grey” area, with no specific metric upon which residency is based.

This residency period and the requirement for applicants to build a “genuine link” with Malta was meant to quell concerns about EU citizenship being debased into a simple transaction.

Then Prime Minister Joseph Muscat had assured during the launch of the scheme that Maltese citizenship was “not a transaction” but the relationship of building a "unique and special nation". 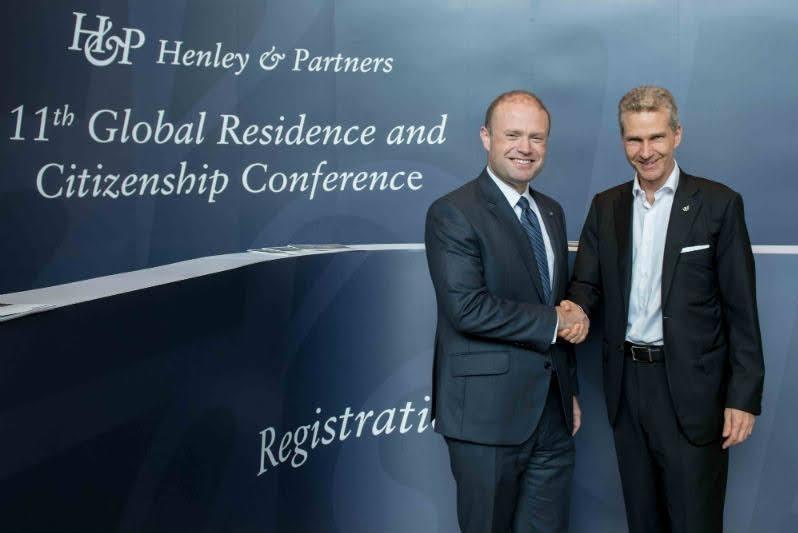 Upon announcing infringement proceedings against Malta and Cyprus in October, the European Commission again emphasised the need for genuine links to be built.

The Commission said the granting of EU citizenship in exchange for a pre-determined payment or investment without a genuine link with the country granting citizenship breached the EU’s core principles.

Whilst Henley & Partners were the concessionaires and one of the agents for the scheme, enforcement of the residency requirement and “genuine link” expectation was in the hands of Identity Malta and the Office of the IIP Regulator.

However, scores of documents reveal a trend where the supposed “genuine link” that was supposed to be built between the passport buyer and the Maltese community was nothing more than a cynical box-ticking exercise.

One document even reveals the existence of a scoring system, where those wishing to spend less time in Malta could boost their score by joining a club, subscribing to a telephony service or donating to charity.

Applicants were assessed on a letter of intent submitted to Identity Malta, charting their plan on how many days they would spend on the island as well as how they intended to build “genuine links” with the Maltese community.

The success of their application would then depend on whether they had abided by these plans at the end of the mandatory one-year residency period. 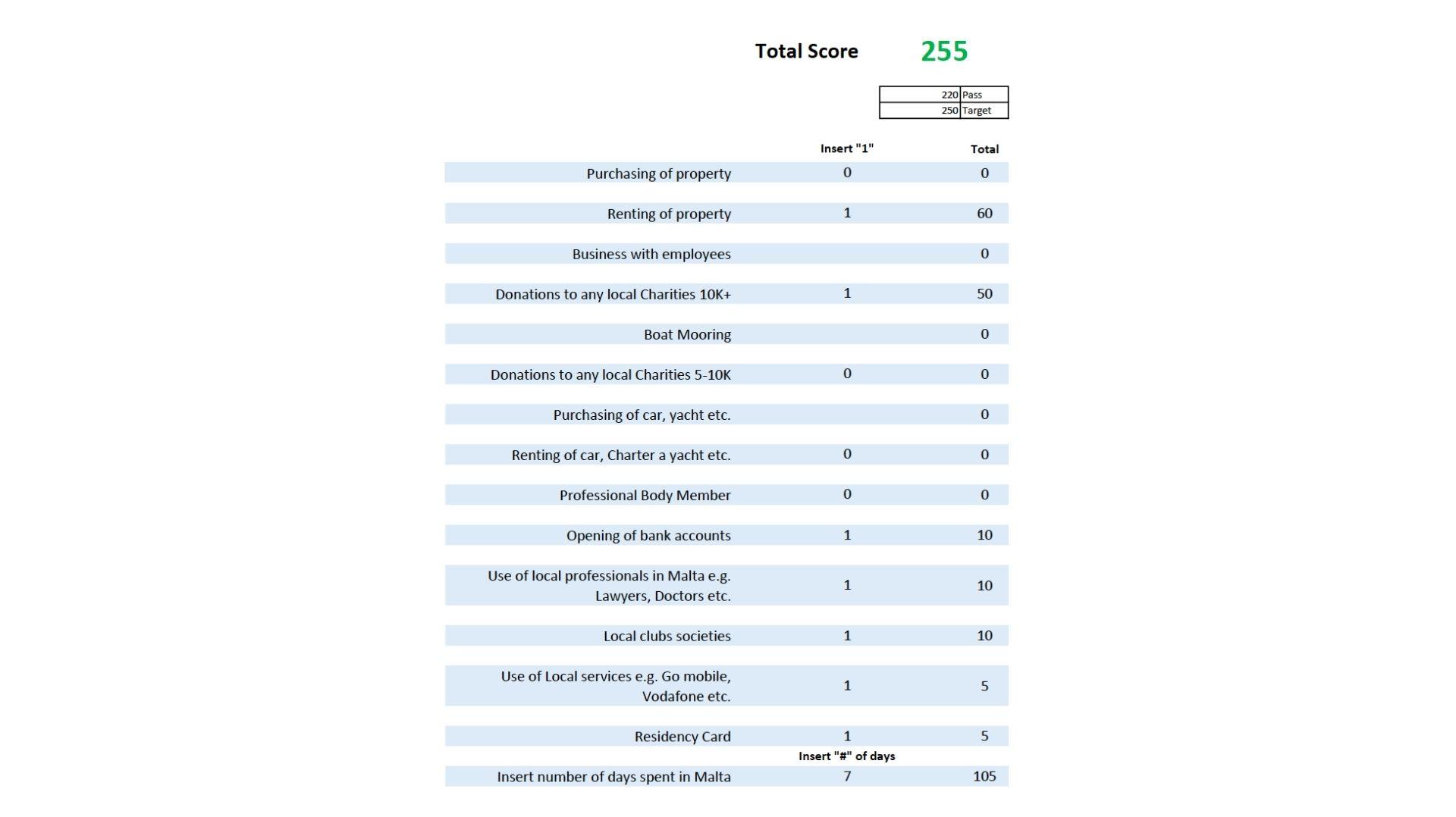 With a passing grade of 220 points, it was often easier to give a €10,000 donation to charity, worth 50 points, rather than spend an additional day in Malta, which earned you 15 points per day.

One of the scheme’s mandatory requirements was an investment in a property rental or purchase.

Even fulfilling this mandatory requirement earned you points. Buying a property would give you 100 points, whereas a rental was worth 60 points.

In a January 2016 e-mail, Henley & Partners advised the representative of one applicant how to boost his score, having spent just eight days in Malta during the residency period, and falling short of his promise to open a local business.

“However, as an alternative, if it’s not feasible to achieve such points at this point of time, we would then suggest that he engage himself in much easier links such as making a donation to local charity organisations, or to join a sports club such as ‘Marsa Sports Club', etc. in order to strengthen his proof of requirements folder,” Henley advised.

Identity Malta would at times show trepidation at the “bare minimum” approach taken by Henley & Partners to the genuine link requirement, if only because it could get picked up by the scheme’s regulator.

“Please advise your clients to avoid going by the absolute bare minimum initiatives as this could give rise to difficulties if seen by the regulator,” Identity Malta adviser Ray Cassar told Henley & Partners in August 2015.

The advice would be repeated a month later, when a Henley manager admitted her client had, due to “business commitments”, visited Malta just once for “2-3 days” to pick up his residency card.

“However, he will definitely make his second visit for 6-7 days upon receipt of invitation letter for oath of allegiance.

“In such instance, could you please advise me how the client should proceed and at least how many genuine links on top of the mandatory investment need to be submitted in order to meet the expectation of regulator.”

“Our advice is to stop looking at the barest minimum,” came the dry response from Identity Malta’s Monica Farrugia.

Contacted for comment, the scheme’s head Jonathan Cardona said the scoring system was a management tool developed by Identity Malta in discussion with Henley & Partners.

“This system was established in the interest of all stakeholders to ensure there is common standard practice in a fair and consistent way which is applied equally to everyone. Also, this provided for auditability, and removed ad hoc decisions by officials.”

Malta reiterates that physical presence, in contrast with legal residence, is not a precondition to acquire nationality in Malta nor in any other EU member state, Cardona said.

Analysis of the travel itineraries of applicants indicate many of the visits to Malta were purely utilitarian. 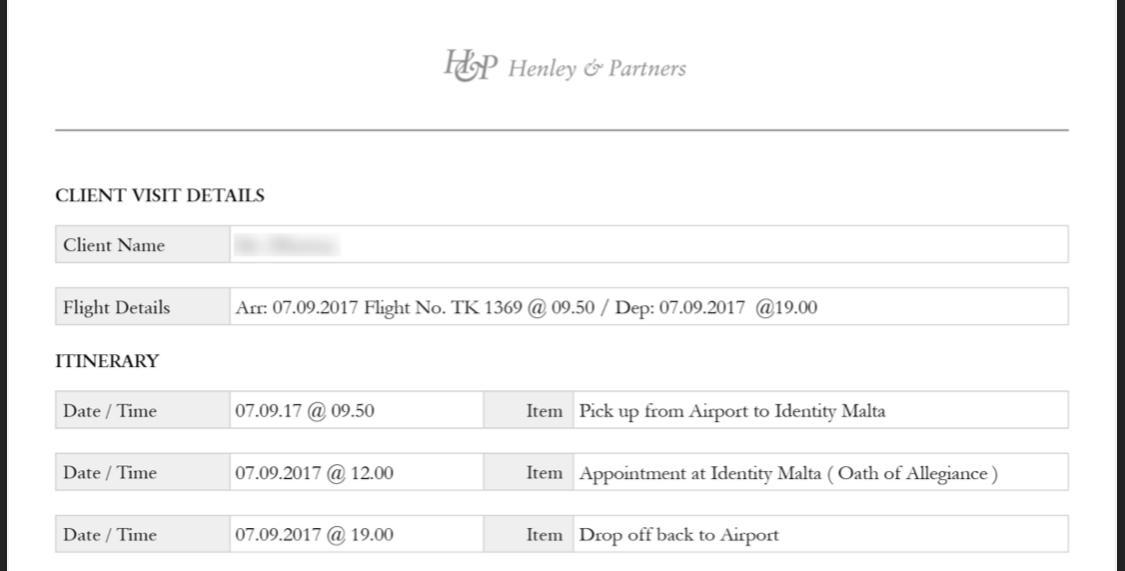 Nine hours in Malta - to swear an oath of allegiance.

Henley’s estate arm catered for such applicants, even offering a property search and power of attorney service that would theoretically mean the Maltese residents would never even have to step foot into the property they were renting.

One of the very few applicants to take extra efforts to prove his links with Malta was a Russian man, who submitted a 15-page document showing “concrete facts related to our Maltese residence”.

“During our stay in Malta, we have made several high-value purchases. We imported many products from the USA and have also purchased many products from local companies,” he wrote, as he listed the items that included a telescope costing US$9,999, a 3D printer for US$4,301, a piano costing US$5,000, two mountain bicycles costing just over US$4,000 and various gym equipment for almost US$5,000.

He attached various documents to prove his links to Malta while he was on the island. These included his Vodafone and Melita contracts, supermarket receipts, and private lessons to learn Maltese and Japanese.

What did Henley & Partners say?

In response to specific questions sent by investigative partners, Henley & Partners released a general statement expressing its pride in the service it had provided to Malta and its people.

The company said it had assisted the government in the creation of a “remarkably successfully sovereign financing and economic innovation platform, raising Hundreds of millions of euros in debt-free capital without which healthcare, social, and cultural investments would not have been possible to make to the extent that they have been in recent years”.

Henley & Partners said the direct injection of debt-free liquidity into a sovereign wealth fund has allowed Malta to be more autonomous with its monetary and fiscal policy than would have otherwise been the case. 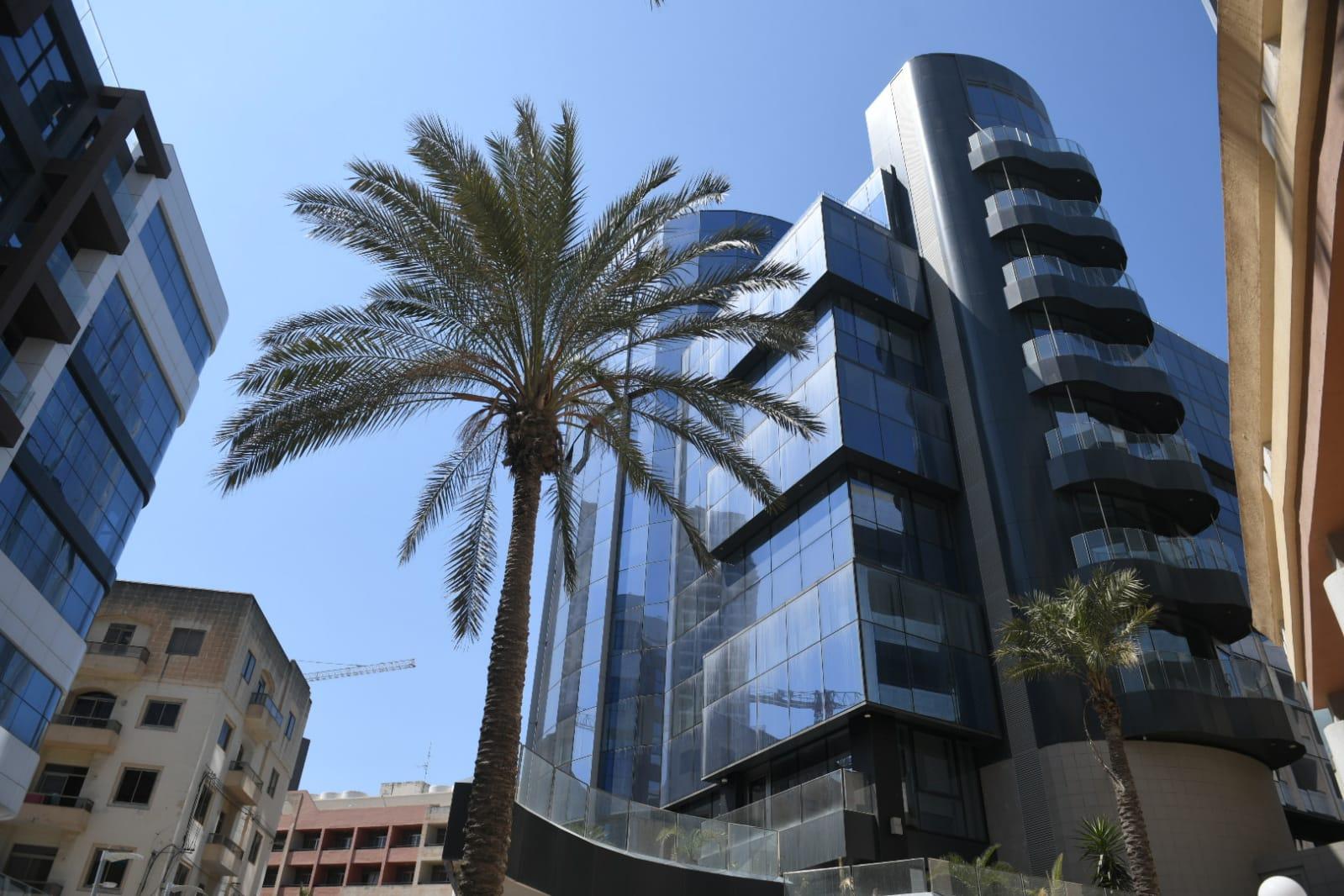 “It creates a safety net against the volatility that countries around the world are having to manage, which is particularly damaging to smaller, tourism - and global trade-reliant economies such as Malta”.

Henley & Partners said it is fully aware of the potential inherent risks in handling client applications for residence and citizenship and has invested significant time and capital in recent years to create a governance structure that is committed to the highest of standards, with due diligence at its heart.

“However, ultimately it is the responsibility of the countries involved to investigate and vet applicants. As a private company, we are neither required by law to do so, nor do we have access to the same level of background information, contacts, and resources that government authorities have.”

The company said its processes are well documented and are significantly more advanced than those of the majority of other investment migration industry participants, and they do regularly result in the rejection of potential clients.

“It is fundamentally false and potentially defamatory to suggest that there is a systemic problem, or that the programmes we are involved in are for nefarious purposes. They are not. In reality, and while we continually strive to do better, proportionately only a very small percentage of applications — significantly less than 1% of all applications over a period of many years — have later been called into question or been found to have been potentially misused, as is evidenced in multiple independent analyses,” Henley & Partners said.

“ We assist hundreds of clients each year to enhance their mobility, personal security, and quality of life, nearly all of whom can be characterized as positive actors who have created businesses, jobs, and significant societal value.

“They do so additionally by also investing in the countries we introduce them to. Henley & Partners makes a positive contribution to the societies and economies of host countries through this very valuable form of immigration, of which more, not less, is required globally.”

The production of this investigation was supported by a grant from the Investigative Journalism for Europe (IJ4EU) fund given to the Daphne Caruana Galizia foundation.