Facebook's decision to censor a historic photograph of the Vietnam war has been slammed by Norway's largest newspaper in a front-page open letter.

In the letter, Aftenposten editor-in-chief Espen Egil Hansen called on Facebook CEO Mark Zuckerberg to recognise that he was "the world's most powerful editor" and accused him of abusing his power.

"I am upset, disappointed – well, in fact even afraid – of what you are about to do to a mainstay of our democratic society," Mr Hansen wrote.

The controversy stems from a decision by the social media network to delete a post by a Norwegian writer that featured The Terror of War, a photograph that showed Vietnamese children running away from a napalm attack during its war with the US.

The photo, which won Nick Ut the Pulitzer prize in 1973, is sometimes called 'Napalm girl' due to the central focus on a young, naked, terrified girl. 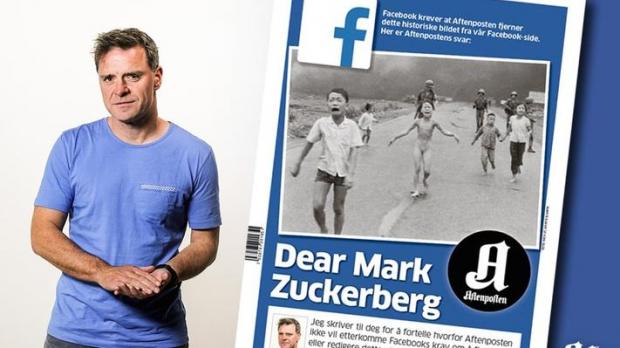 Facebook censors deleted the photo and subsequently banned the post author. When Aftenposten reported on the censorship and shared the article - including the iconic photo - it received a message from Facebook asking it to "either remove or pixelise" the photo, as the naked girl image went against its guidelines.

“I think you are abusing your power, and I find it hard to believe that you have thought it through thoroughly, Mr Hansen wrote, arguing that such editorial decisions "will simply promote stupidity and fail to bring human beings closer to each other."

Facebook has come in for strident criticism in recent months, following claims that its trending news editors favoured liberal news stories over conservative ones.

The social media giant reacted by downplaying its editorial role - Mr Zuckerberg recently told an audience "we are a tech company, not a media company" - and replacing its trending news team with a fully-automated algorithm.

Problems with relying solely on AI to determine trending news became evident just two days into the new system, when the algorithm promoted a fake news story to Facebook users.