A delegation of MEPs last week published a blow-by-blow account of a meeting they held with Prime Minister Joseph Muscat, his chief of staff and the Justice Minister in December, during which they raised numerous rule of law concerns about Malta. The Sunday Times of Malta has fact-checked the statements made during the meeting, as reported by the MEPs.

Claim: “The Prime Minister underlined that, as a follow-up of the leaked FIAU reports, magistrates had been appointed to investigate suspicions raised by the FIAU and these appointments were also supported by the Opposition”.

Fact: The FIAU reports should have been followed up by the police when they received them in 2016. The only follow-up to the leaked FIAU reports was when then Opposition leader Simon Busuttil presented two leaked reports to the courts in 2017.

This led to two separate magisterial inquiries into the FIAU’s suspicions that the Prime Minister’s chief of staff, Keith Schembri, was involved in money-laundering activities. Money laundering carries a maximum jail term of 18 years.

Claim: “He [Muscat] denied that government members are contractually obliged to participate in international conferences to promote the scheme, their participation was rather due to the need to ensure good explanations about the IIP.”

These passport sale roadshows are usually fronted by the Prime Minister, who is accompanied by his chief of staff.

Article 7.4: “The government will ensure to send, whenever requested by the concessionaire, appropriate high-ranking government representatives, or other senior government officials, to speak at the events and rep-resent the programme and the government”.

Claim: “As regards the question of Nexia BT in the passports schemes, the Prime Minister said: ‘they have no role’.”

Fact: Nexia BT are listed as official agents for the scheme (see below). Karl Cini is listed as their official contact person. Mr Cini is also the financial adviser who helped the Prime Minister’s chief of staff and Tourism Minister Konrad Mizzi to open secret companies in Panama, sheltered by trusts in New Zealand.

One of the leaked FIAU reports showed the anti-money-laundering agency’s suspicions that Nexia BT’s managing partner, Brian Tonna, kicked back €100,000 from passport sales to Mr Schembri. 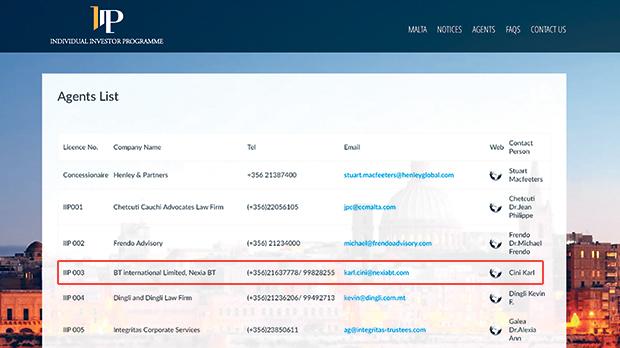 The Prime Minister said Nexia BT have no role in the passports scheme. Yet, here they are, in a list of agents of the Individual Investor Programme.

Claim: “Specific questions were also addressed to the chief of staff on his relations to owners of Nexia BT, including Mr Tonna. He admitted that, having exercised in the private sector in Malta, he is friendly with many actors in the financial sector and admitted to having a bank account in the Pilatus Bank, precising [sic] he has also accounts with other banks in Malta.”

Fact: Although Mr Schembri’s statement about having accounts with other banks in Malta is true, it prompts the question why his financial adviser, Karl Cini, gave the impression it was uncommon in Malta to have an account with more than one bank.

In an e-mail sent to the Panama firm Mossack Fonseca (below), Mr Cini said that his clients [Schembri and Mizzi], would like to avoid informing their banks here [about their secret offshore set-up]. 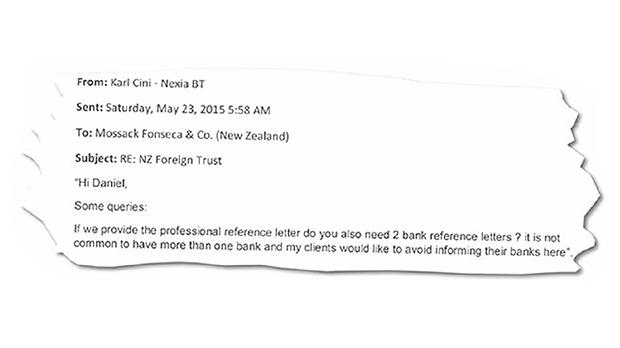 Claim: “On the overlapping powers of the Attorney General, the Minister of Justice explained that the AG does not have the competence to investigate and that his competences as adviser to the government are limited”.

Fact: What Justice Minister Owen Bonnici failed to tell MEPs is that Article 4 of Malta’s anti-money-laundering laws empowers the Attorney General to apply to the criminal court for an investigation order.

When MEPs pointed this out to Attorney General Peter Grech during their meeting with him, Dr Grech said that to issue such an investigation order, one must be in possession of concrete evidence to stand before the courts.

Article 4: “Where, upon information received, the Attorney General has reasonable cause to suspect that a person is guilty of the offence mentioned in article 3 [money laundering], he may apply to the Criminal Court for an investigation order....”