A man whose life has been turned upside down after being falsely accused of sexual abuse has written an impassioned letter to an MP asking "when will my life be given back to me?"

Nationalist MP Jason Azzopardi read parts of a letter sent to him by Emanuel Camilleri in parliament today. He said he had obtained Mr Camilleri's permission to do so.

“I have not as yet been declared innocent and my name is still on the paedophile register for all to see. This situation has ill effects on me, physically, mentally and psychologically and I am moving into more of a depressed state,” Mr Camilleri, who spent more than a year in jail after his daughter accused him of molesting her, wrote. His daughter subsequently pleaded guilty to perjury.

The Maltese legal system does not allow for a court decision to be reviewed when new evidence pointing to a possible miscarriage of justice emerged, explained Dr Azzopardi. The only exception was in cases of a trial by jury.

Although the witness whose evidence landed Mr Camilleri in jail had subsequently testified that she had deposited false evidence, there was no possible remedy to remove the guilty verdict.

“If I want to go with my family to Disneyland where there are children present, I would have to ask the court for permission. I have to declare my prison sentence to foreign authorities before my arrival,” he wrote.

He referred to his proposal in Parliament two years ago for a legal amendment to allow for a review when miscarriage of justice is suspected.

“Although the Minister of Justice signalled his agreement at the time, unfortunately nothing has materialised as yet,” said Dr Azzopardi. 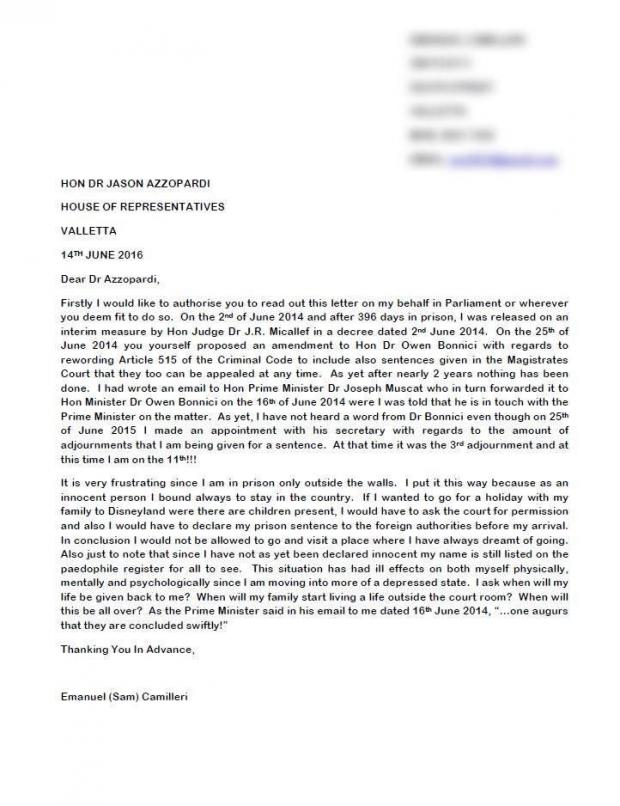