Distraught relatives of two elderly patients who died at a Gozo hotel after being moved there from the island’s hospital last week have described their distress and anger over the “claustrophobic” conditions.

At least 72 elderly patients were relocated to Downtown Hotel so that the entire geriatric wing of Gozo general hospital could be re-purposed to house coronavirus patients.

The hotel stands to make around €1.6 million from the year-long contract, which was signed without going to tender.

However, the families of patients, who have since died at the hotel, say the conditions are far from ideal.

“The rooms are too small for two patients,” said Antoinette Mizzi.

“The corridors and lift are also small. The building is a far cry from the good conditions at the hospital, and the move to such claustrophobic conditions has been traumatic for the elderly.”

Another woman, who preferred to remain unnamed, expressed “fury” at the conditions in which her grandmother had found herself in before her death.

The 92-year-old woman, who was bedridden but had no other specific health conditions, died the day after she was moved.

“I was horrified when I went to the hotel after my grandmother died and saw the room she was in,” the woman said.

“There were just two beds, one for each patient, and a bedside table in between the beds, and no room for anything else.”

The woman spoke of calling Downtown repeatedly before a nurse answered, and said that her grandmother’s personal belongings had not even been taken to the hotel, and she had to pick them up from the hospital.

Other visitors have also alleged that gurneys do not fit through the doors and it is unclear how wheelchairs can be manoeuvred through the lifts and rooms. 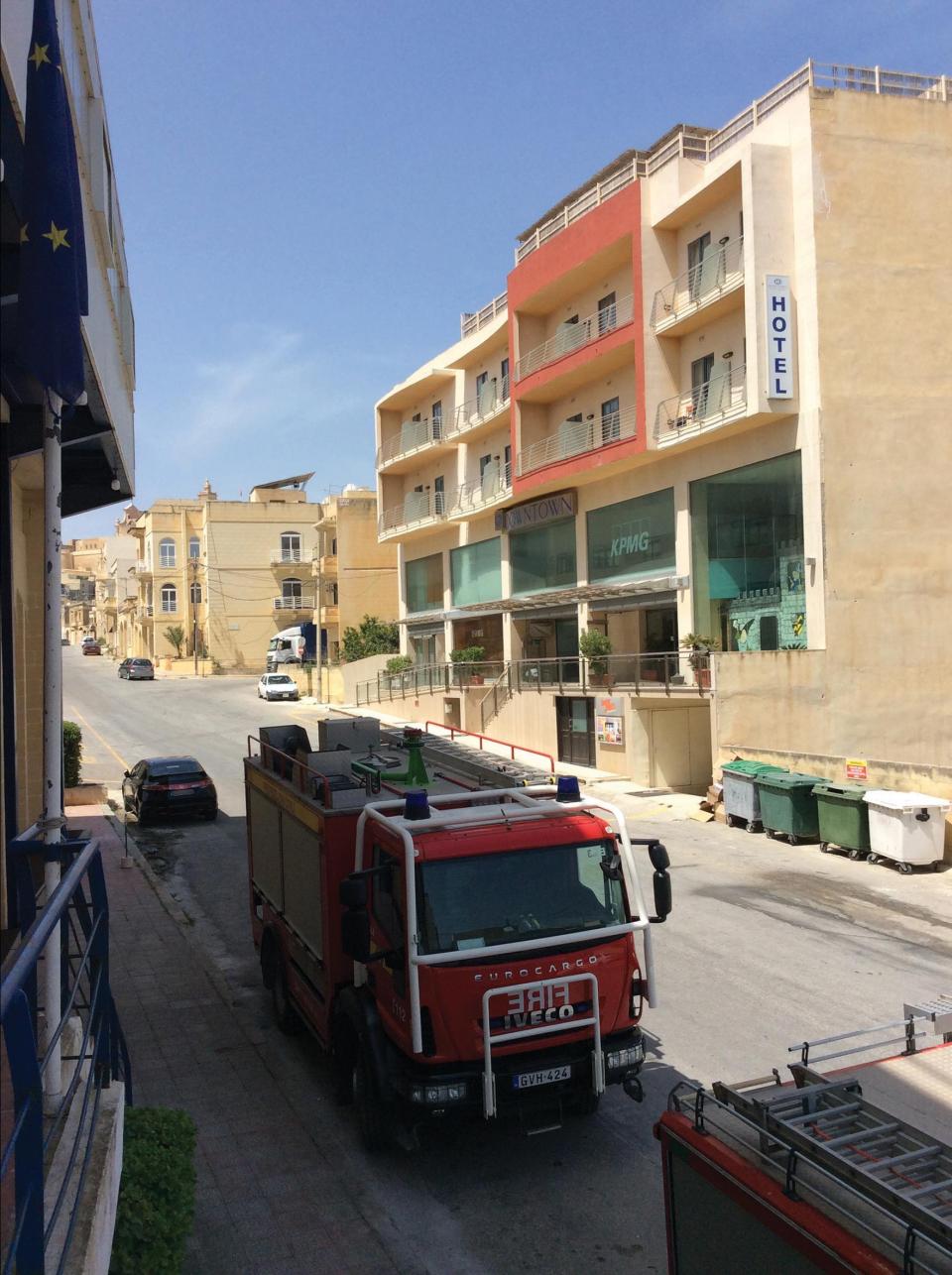 A fire engine parked outside the hotel. The CPD is operating a temporary fire station close to the hotel during the COVID-19 pandemc.

Another relative claimed that the patients have to “stay in bed most of the time, some of them all the time, because the lifter to move the patient from bed to wheelchair can’t fit in the room so they are not able to move them [the patients]”.

The Ministry for Gozo is paying Downtown Ltd €54.79 for every bed space.

That’s €109.79 for most rooms considering that two patients are sharing – a price that’s considerably higher than the rate hotel guests used to pay for rooms, which ranged between €48 and €87 according to Tripadvisor.

Downtown Ltd is owned by two shareholders: a car dealer called SB Autocentre Ltd and property developer Joseph Portelli, who is known for a series of controversial developments on the island.

He holds 4% of the shares, although he is also a director, as well as legal and judicial representative, together with Raymond Bajada of SB Autocentre.

The Gozo Ministry defended the deal by saying that the price includes alterations (taken to mean mostly installations of wiring), cleaning and reception services and that they took over the entire hotel, not just the rooms.

Industry sources have told Times of Malta that average prices for care homes inclusive of all-round service, including food, range from €50 to €80 per person.

Current daily prices at one of Malta’s most luxurious homes, whose name is being withheld, range from €45 for elderly who are fully independent to €120 for fully dependent patients who require constant care, including assisted washing, feeding and toilet duties. These prices are for two patients housed in large modern ensuite rooms that boast kitchenettes, terraces with vantage point views, and are set in extensive grounds.

The spokesperson of the Ministry for Gozo was contacted for comment.

Correction: An earlier version of this article named Raymond Bajada of SB Autocentre as Raymond Galea. The error is regretted.