French designer Thierry Mugler, who reigned over fashion in the 1980s and died on Sunday, was as famous for his fantastical couture as for his blockbuster fashion shows. He was 73.

Mugler's daring collections came to define the decade's power dressing, with his clothes noted for their structured and sophisticated silhouettes, showcased by his extravagant shows.

"I always thought that fashion was not enough on its own and that it had to be shown in its musical and theatrical environment," he once said. 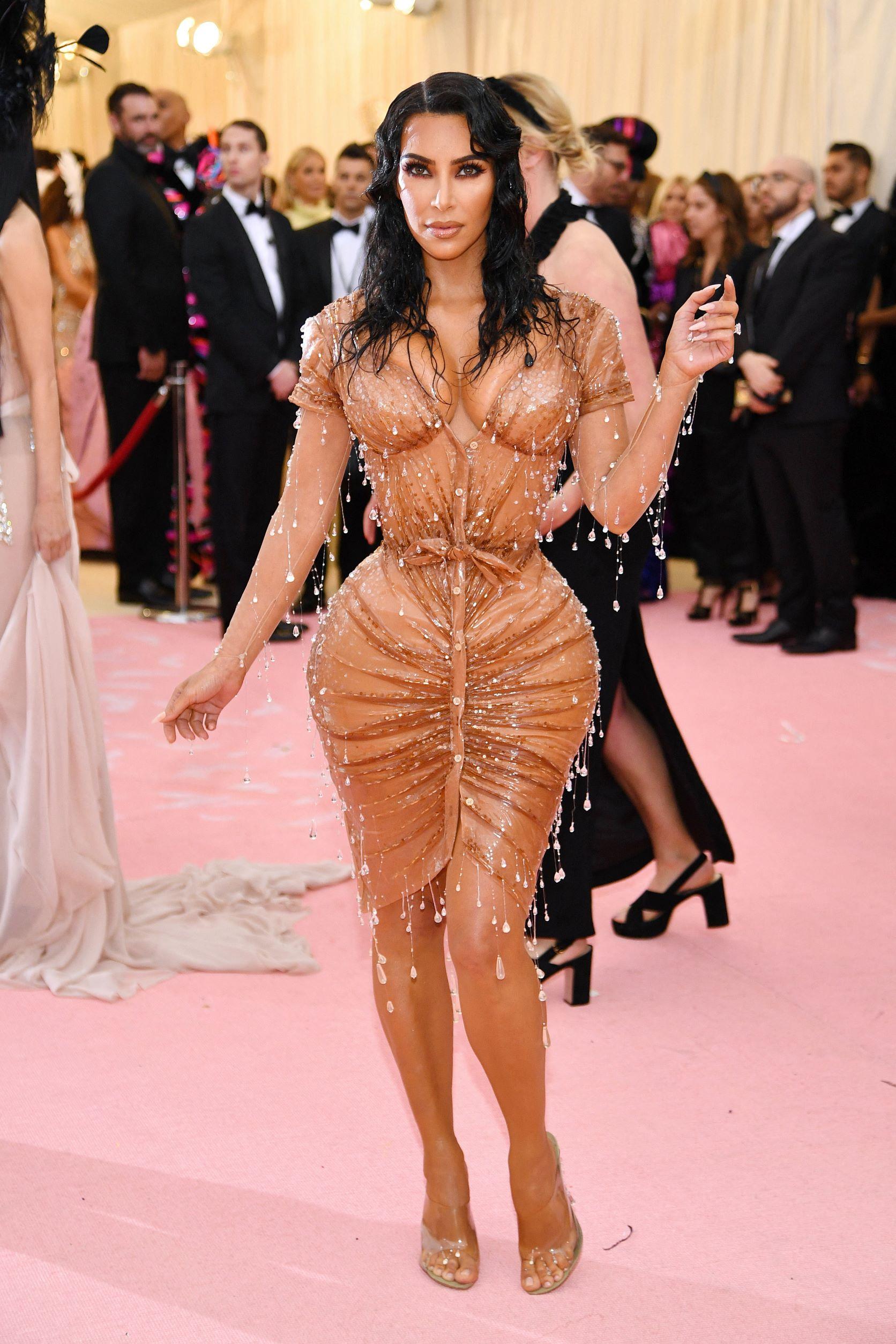 In later years, he dressed Beyonce and Lady Gaga – and in 2019 came out of retirement to create Kim Kardashian's Met Gala look.

His agent Jean-Baptiste Rougeot, who said the designer had died of "natural causes", added he had been due to announce new collaborations early this week.

Born in Strasbourg in December 1948, as a young teen Mugler joined the Opera du Rhin's ballet company before studying at the School of Decorative Arts.

From a young age, he created his own clothes, adapting items bought at nearby flea markets. He moved to Paris aged 20, initially to work with another ballet company – but was more successful with his own wardrobe. 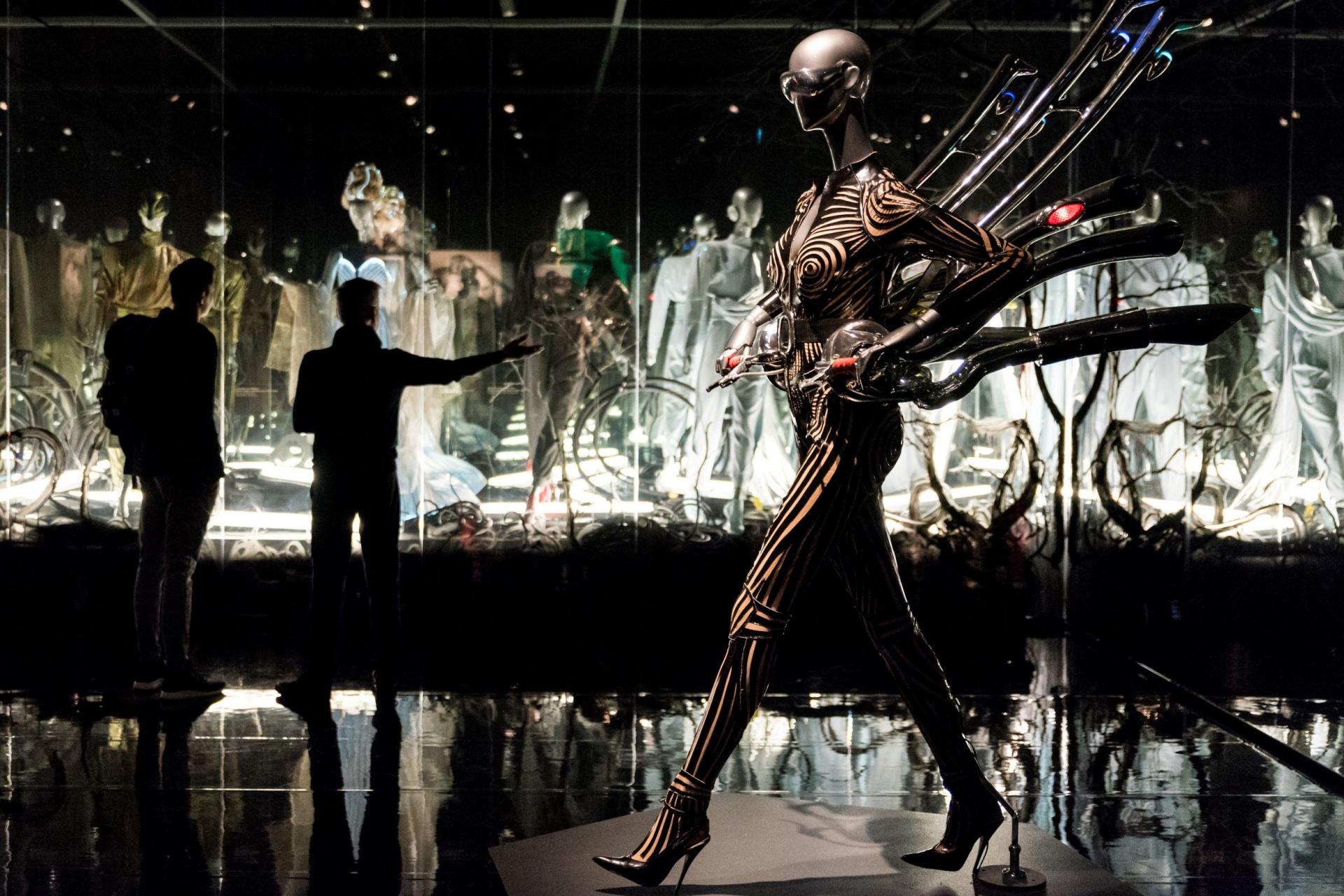 Designs by Thierry Mugler are displayed during his exhibition ‘Couturissime’ at the Montreal Museum of Fine Arts.

In 1973, he took the plunge and created his own label Café de Paris, before founding "Thierry Mugler" a year later.

"Dancing taught me a lot about posture, the organisation of clothing, the importance of the shoulders, the head carriage, the play and rhythm of the legs," said Mugler.

A showman at heart, he organised spectacular presentations of his creations pioneering the modern spectacle of the 21st century fashion show.

"Today's fashion shows are a continuation of what Mugler invented. The collections were pretexts for fashion shows," recalled Didier Grumbach, former CEO of Thierry Mugler.

He had showmanship in his blood: for the 10th anniversary of his label in 1984, he organised the first public fashion show in Europe with 6,000 attending the rock concert-like show.

But nothing compared to the 20th anniversary celebration in 1995, staged at the Cirque d'Hiver. 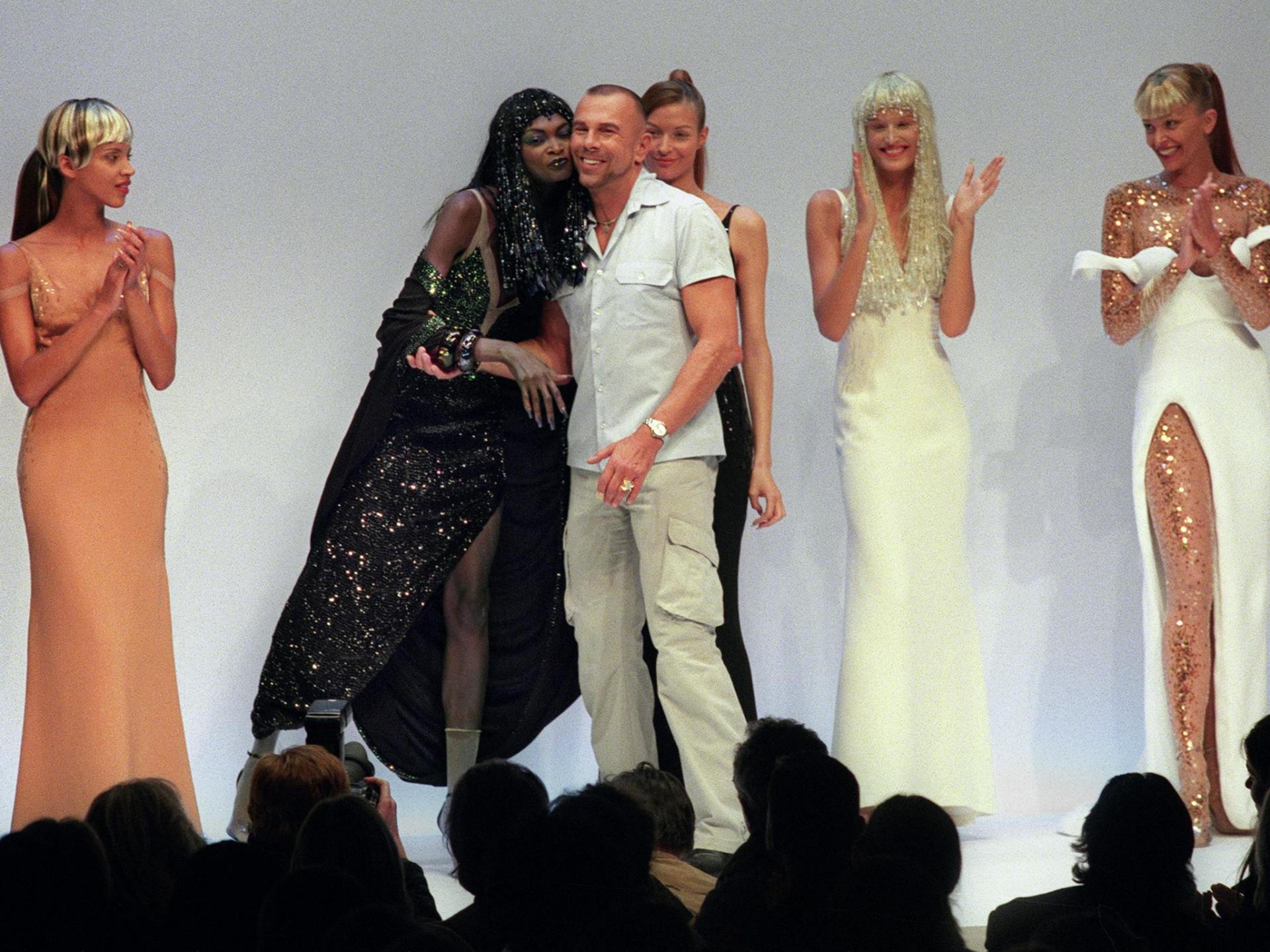 In this file photo taken on October 12, 2000, Mugler hugs a model after his show in Paris during the Spring/Summer 2001 ready-to-wear collections. Photo: Pierre Verdy/AFP

Models including Jerry Hall, Naomi Campbell, Eva Herzigova and Kate Moss paraded alongside stars such as Tippi Hedren and Julie Newmar, with the spectacle culminating in a performance from James Brown.

He was also a pioneer and advocate for trans models with Connie Fleming and Teri Toye walking his shows in the nineties.

"Me being on Mugler's runway, that should have been the end of his business," she told Interview Magazine in 2020. "But his business did not go up in smoke. How does my presence and my being offend you?"

The 1992 launch of his company's first perfume "Angel" – in collaboration with Clarins, which acquired a stake in the company before taking control in 1997 – was a runaway success.

Clarins shuttered part of Thierry Mugler in 2003, a year after the designer reportedly left the brand, but continued the scent business with "Angel" rivalling Chanel's No.5 for the top spot in sales. 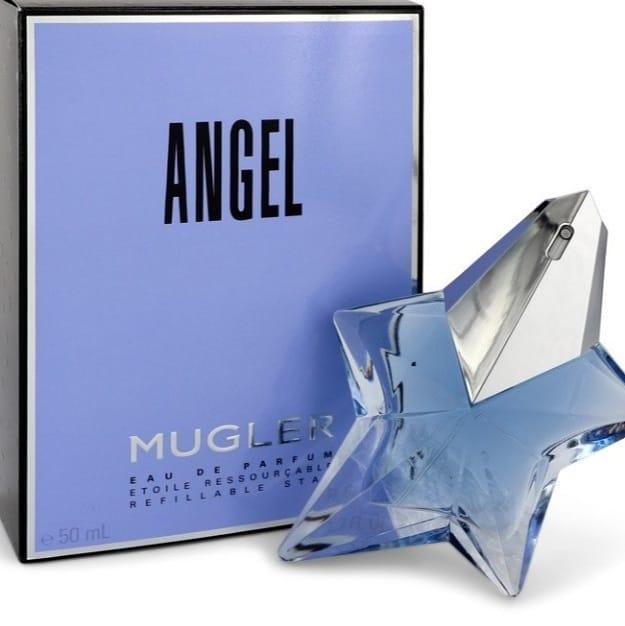 Renowned for his work with celebrities, he counted Grace Jones and Hall among his muses, and had a long-running creative collaboration with David Bowie – even dressing him for his wedding to Iman.

Despite seemingly retiring from fashion's frontlines in the early 2000s, Mugler continued to impact culture and worked with Beyonce on her I am... world tour.

In later years the designer suffered a series of accidents – crashing his jeep and motorbike – requiring facial surgery and rebuilt his body with intensive bodybuilding.

As news of his death broke, his former collaborators celebrated the designer. 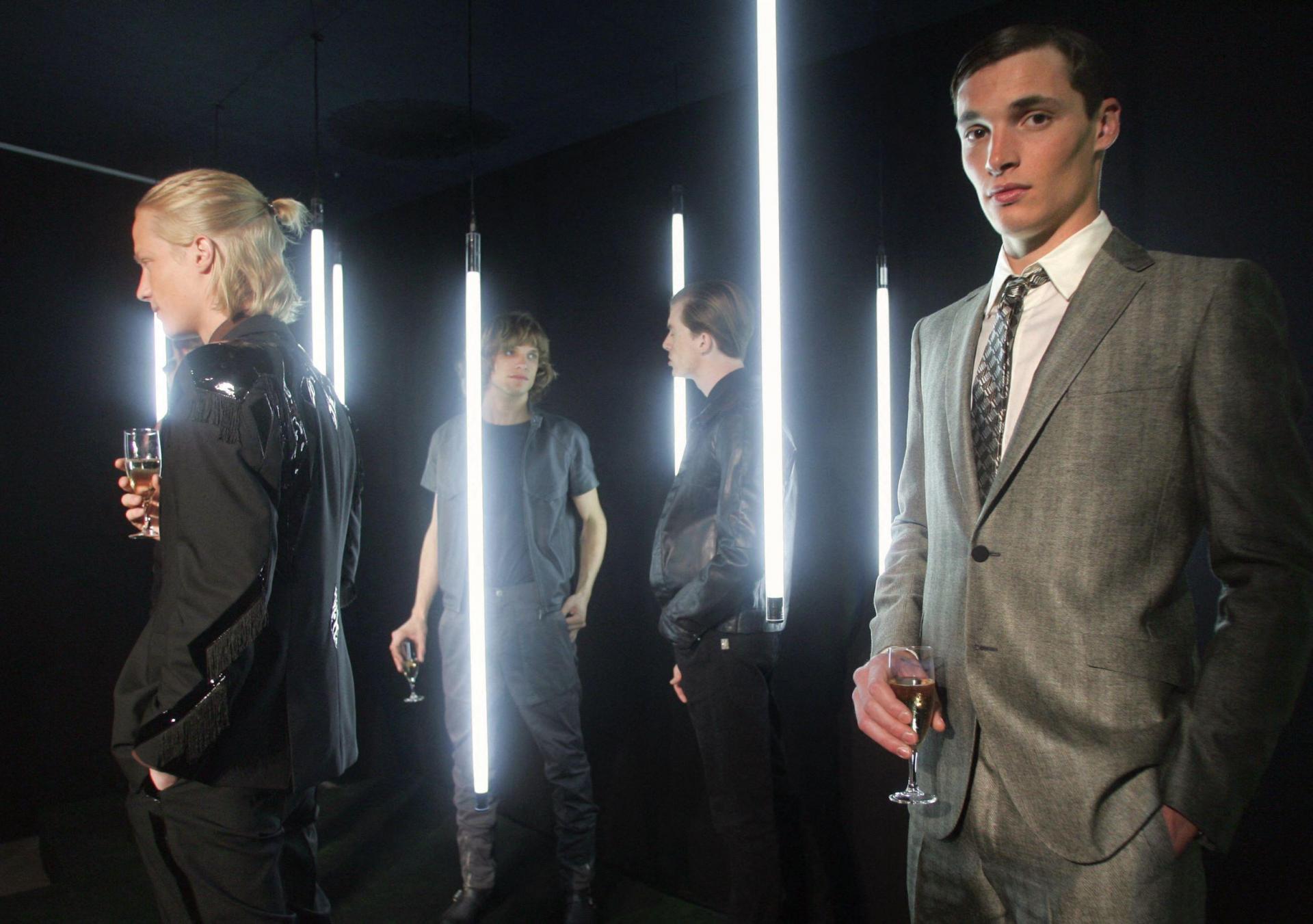 Diana Ross tweeted that she would miss Mugler, adding, alongside an image of the two, "this was a wonderful time in our lives".

"Rest in peace," Beyonce's website posted with a photo of Mugler.

Fleming, posting on Instagram, wrote there were "no words just devastation and sadness".

Mugler's creative director Casey Cadwallader posted on Instagram the designer had "changed our perception of beauty, of confidence, of representation and self-empowerment".

He added: "Your legacy is something I carry with me in everything I do. Thank you."