A ‘dual filing system’ used by Pilatus Bank to hold sensitive client information was not flagged to the FIAU during a 2016 compliance visit at the now defunct bank.

The Financial Intelligence Analysis Unit (FIAU) and Malta Financial Services Authority (MFSA) had descended on the bank in March 2016 after receiving intelligence about the high number of politically exposed persons from Azerbaijan banking at Pilatus.

It has since emerged from the Egrant inquiry that the inspection team may not have been granted access to certain confidential client information, as Pilatus Bank used what was described as a dual filing system, whereby certain confidential documents were kept in a separate file for added secrecy.

The bank managed to shoot down a highly critical FIAU report about its secretive operations and lack of anti-money laundering controls after producing documentation found to be missing during the initial inspection.

Replying to questions from Times of Malta, an FIAU spokesman said the FIAU was not aware of the existence of any separate, dual or parallel filing system.

Pilatus Bank was shuttered in 2018 following the arrest in the US of bank owner and chairman Ali Sadr on money-laundering and sanction-busting charges. 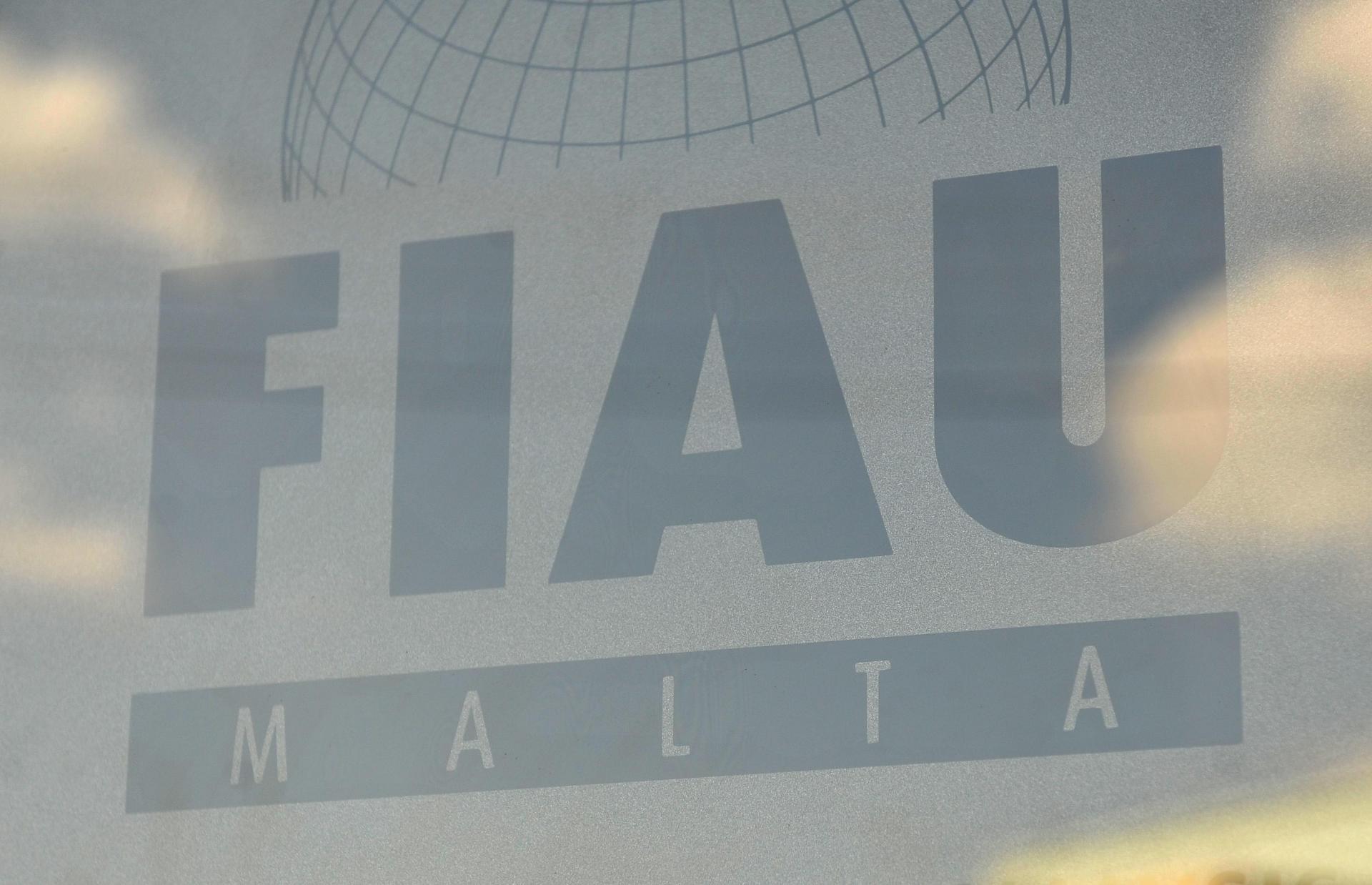 A report drawn up by the FIAU after the compliance visit had said  that the “veil of secrecy” created at the bank made it easier for banking transactions to be carried out by politically exposed persons, their family members and their close associates without the level of scrutiny required by law.

The spokesman said the FIAU had requested various documentation, several customer files for examination, as well as other information and explanations as was deemed necessary during its 2016 inspection.

Compliance visit not an investigation

He said the FIAU was not in a position to know what information and documentation was held unless this was made available to it.

Contrary to an investigative process, a compliance review by the FIAU such as the inspection carried out at Pilatus Bank is an administrative process aimed at verifying compliance with anti-money laundering laws.

The spokesman said the FIAU could not establish whether at the time of the first on-site examination in March 2016, the bank was in possession of other information and documents which it withheld from the FIAU.

Pilatus Bank had strongly contested the FIAU’s findings, supported by reports from KPMG and law firm Camilleri Preziosi, saying the bank was in possession of all the necessary client information and all its files were in order. 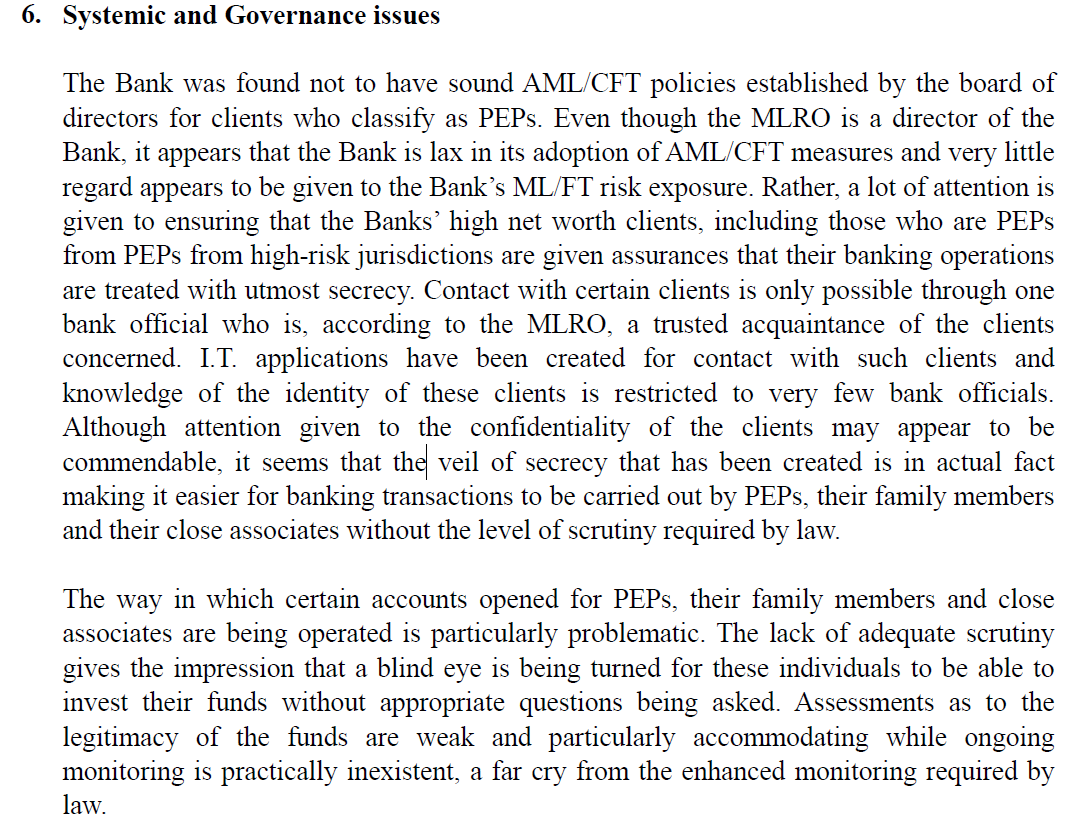 An excerpt from the leaked FIAU report.

The FIAU spokesman said Pilatus Bank had claimed that the inspection team did not request nor examine certain documentation that was indeed held by the bank.

“While the FIAU did not accept this line of defence, the FIAU agreed to conduct a second follow-up on-site examination for further verification. It was during this follow-up visit that the missing information and documentation was made available to the inspection team,” the spokesman said.

The bank continued to insist that all the necessary information and documentation was held at the bank, even during the initial FIAU inspection.

According to the spokesman, the FIAU never accepted this explanation, however it could not establish whether the information and documentation was indeed held by the bank, whether it was intentionally withheld or whether it was obtained following a remediation process.

It was for these reasons that the FIAU concluded that there was no sound legal basis to impose sanctions on the bank, the spokesman said.

This failure to take regulatory action against Pilatus earned it a stern rebuke from the European Banking Authority.

The EU’s banking watchdog also recommended the adoption of an extensive action plan, which the FIAU has since worked on to improve its compliance functions.

“Following this case, the FIAU implemented a number of reforms to strengthen its supervisory process and procedures in order to ensure that a similar case does not repeat itself in the future,” the spokesman said.

In February 2018, the FIAU swooped in on the bank to seize all its data, including recordings of conversations between bank employees and clients.

A forensic report carried out as part of the Egrant inquiry found transactions involving the daughters of Azerbaijan ruler Illham Aliyev and the sons of powerful minister for “emergency situations” Kamaladdin Heydarov showed commonly accepted red flags for money laundering.

Then magistrate Aaron Bugeja ordered a police investigation into potential money laundering at the bank.