The first cases of coronavirus in Malta have been confirmed, Health Minister Chris Fearne said on Saturday.

The first patient was a 12-year-old Italian girl and was previously in self-quarantine. She is now being kept inside an infectious diseases unit of Mater Dei Hospital and is in a good condition, the minister said.

Later on Saturday, the health ministry confirmed both her parents also tested positive for the virus and were also isolated at Mater Dei Hospital.

"We would like to reassure the public that these cases are being kept in isolation," the ministry said in a statement.

To date, 181 tests have been carried out on people who were travelling in affected areas and developed symptoms. Only the three family members have tested positive for COVID-19.

In addition, 157 tests have also been carried as part of the surveillance programme and tested negative for the virus.

The Italian family who reside in Malta returned to the country following a holiday in Trentino in northern Italy on Tuesday, flying back from Rome. The girl began feeling unwell on Thursday and her family contacted health authorities on Friday, when she was tested for COVID-19. 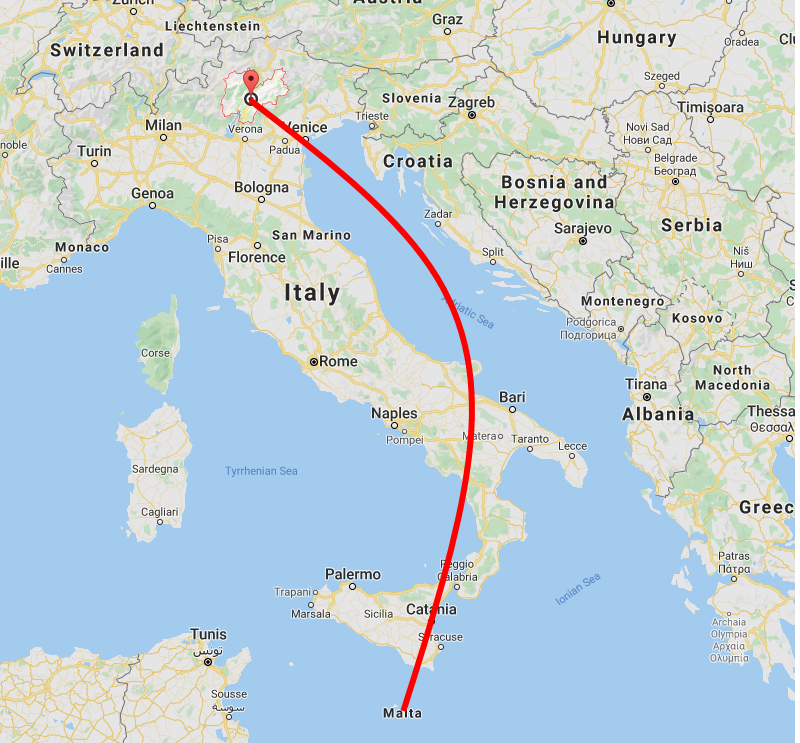 The 12-year-old girl was on holiday with her family in Trentino in northern Italy last week.

Health Minister Chris Fearne said that the girl, her sister and parents had all self-quarantined following their return from Italy, following health authorities’ advice.

“The children did not go to school and the parents did not go to work or leave the house,” he said. “Their contact with other people was minimal”.

The 12-year-old girl's parents and sister are also being kept in mandatory quarantine at Mater Dei.

Fearne declined to say which airline the family had used to return to Malta or which school the girl attended, saying she had not been to school since returning from her holiday in Italy.

Authorities are now tracing people who may have been in contact with the family in the previous weeks.

Fearne said this also included other passengers on the Rome flight, who were in the process of being identified in order to be tested.

But the risks to people who were close to the girl before she began exhibiting symptoms are likely to be minimal, said professor of pathology Chris Barbara.

Barbara said that research indicates that viral loads are lower when affected people have yet to exhibit symptoms and that it appears people must be in close contact - 2m or less - with affected people for at least 15 minutes to become infected.

Another person has tested negative for COVID-19 but is still in mandatory quarantine because she was close to someone who was later diagnosed with the virus in Slovakia, the minister said.

Preparations for an outbreak

People arriving from affected countries and regions have been urged to self-quarantine for 14 days as a precaution to help contain the spread of COVID-19.

Public health authorities have repeatedly said in recent weeks that they are prepared for an eventual COVID-19 outbreak. Plans included the setting up of a 12-bed unit for mild cases as well as of another isolation unit, which Fearne confirmed on Saturday was at Boffa hospital.

"We would like to remind the public that there is no need for alarm and to take the necessary preventive measures of washing hands regularly, covering nose and mouth with a tissue or flexed elbow when coughing and sneezing and staying home if sick. For further information, you may call the COVID-19 helpline on 111," the ministry said.

On Friday, the World Health Organisation said that the number of confirmed cases across the world has surpassed the 100,000 mark and said that countries now had to give the "highest priority" to containing its spread.

Studies released over the past month suggest that children and young adults are less susceptible to COVID-19 than older people.

An analysis of almost 45,000 confirmed cases in China published by the Journal of the American Medical Association in late February found that fewer than two per cent of cases occurred in people aged 19 or younger.

By contrast, 87 per cent of cases affected adults aged between 30 and 79.

Correction March 7: A previous version of this article misstated the patient's age. She is 12, not 8.

What do you want to know about the coronavirus? Email us your questions and we’ll ask the experts: newsroom@timesofmalta.com