For the first time, the owner of one of the major fish farms has acknowledged the pollution caused by the industry, saying the slime in southern bays meant the farms will have to move.

Salvu Ellul, owner of MFF Ltd, said the industry has tried hard to limit the impact of its operations. “We’ve invested in technology, but it wasn’t enough. People are right to complain. We have to face the fact that we’re going to have to move,” he said.

He refused to speak to The Sunday Times of Malta last week, saying he did not owe an explanation. Yet Mr Ellul contacted this newspaper after last week’s report showing an aerial photo taken by Daniel Cilia of a massive spread of sludge from the farms to the southern coast of the island.

The evidence in the photo was undeniable, but so far the authorities responsible for monitoring the operations at fish farms have never admitted that they are the source of the slime often seen at Kalanka and Peter’s Pool. 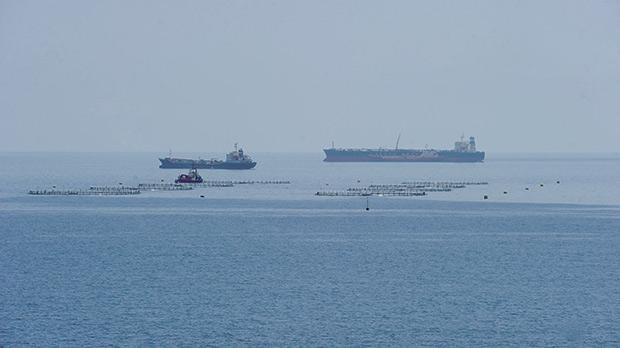 Fish feed releases fats that rise to the surface of the sea and are then pushed by currents, according to the owner of this fish farm in the south. Photo: Steve Zammit Lupi

Every summer, swimmers in the popular southern bays complain of the stench of fish carried by the slime. Mr Ellul explained that it resulted from the feeding process: “The feed releases fats that rise to the surface of the sea and are then pushed by currents.”

He said the industry did invest in trying to contain the impact. His company uses a feeding cage that is surrounded by canvas to contain the waste. On top of that, efforts are made to collect as much of the fat as possible using a skimmer – a tool that resembles a rolling brush that collects and sucks the fats from the water.

However, this has not been enough to stem the drift of slime into popular swimming zones and onto the coast. The waste naturally increases depending on the intensity of operations, and MFF is using 21 cages when it has a permit for five.

Mr Ellul insists he is operating within the law. Two years ago, when this newspaper revealed the company had increased the number of its cages to 18, the Planning Authority issued an enforcement notice.

The company appealed, and the case is still ongoing, which means the PA cannot act until its conclusion.

The fish farm close by, belonging to Fish and Fish Ltd, is in line with its permit in terms of cage number, but is in breach because of the size of the cages and the fish species they contain.

While MFF Ltd is prepared to move, saying growth was the most important factor, Fish and Fish Ltd is adamant a move is not feasible. The relocation of the farms further away from the coast presents added challenges for the industry, such as sea depths that are impossible for divers who monitor the nets and feed, the company argues.

The zone designated by the Planning Authority and the allocation of space between farms is also a sore point, with Fish and Fish saying it did not make sense and would make operations impossible.

But Mr Ellul is looking at alternatives, such as underwater cameras to replace the divers. “We have to keep in mind that this is an important sector for the economy. We employ some 80 people. We have to find a way forward,” he said.