The subterranean Punkva River, being almost 30 kilometres in length, is the longest underground river in the Czech Republic. It is thanks to the erosion, fluctuation and twisting flows of its many tributaries that an extensive system of underground passages, domes and abysses was formed underneath what is known as the Moravian Karst, a protected nature reserve on the eastern part of the Czech Republic.

This beautiful region is home to a number of unique geological features, not least of which are a number of cave systems underlying the lush green woodlands and forests. The most famous of these cave networks are the Punkva Caves located to the north of the city of Brno, which showcase one of the natural wonders of the Czech Republic – the Macocha Gorge.

Fortunately, we had researched our destination well before actually visiting the caves and so realised early on that they could only be accessed through a guided tour. Since tours of the caves only take place at allocated times, not to mention the fact that the place is a famous tourist attraction, it is important for anyone interested in visiting to book the tour beforehand.

We bought our tickets online, yet still had to visit the Visitor’s Centre to exchange our e-mail with the actual tickets. While there, we were also told that if we wanted to take photographs in the caves, we had to purchase a coloured sticker for a small fee and attach it to our clothes. This may seem strange, but it is common procedure in certain countries.

Armed with tickets, stickers, cameras and expectations, we boarded the small tram from the Visitor’s Centre to the entrance of the Punkva Caves. One can, of course, opt to walk the two-kilometre woodland trail instead of using the tram. Once we arrived in front of the entrance, I abruptly realised that it would be much colder underground, and that the light clothes I was wearing, suitable for a stroll in the sun, were definitely not enough for the freezing caves.

There was only the official merchandise store nearby, so I hurried over and bought a bright red ‘Punkva Caves’ sweater for the occasion. It did keep me warm during the one-hour tour and was also a very nice souvenir. At least I had the good sense to wear comfortable sneakers.

Our group was made of around 30 people. I was glad to see that there were even small children and senior citizens – a clear indication that there were no dangerous, unsecured sheer drops or rough terrain to climb ahead. After all, one does not need to be a miner to explore the Great Underground! The caves are, in fact, very safe for visitors, being equipped with plenty of lighting and having level floors and stairs. Unfortunately, it was at this point that we realised that the tour was in Czech and that there were no tours in English available. However, I had previously found and downloaded a free mobile application with a tour book of the caves on my mobile phone and I found that very helpful.

The tour itself is actually divided in two parts. The first part is on foot, while the second consists of a very atmospheric boat-ride on the subterranean Punkva River. 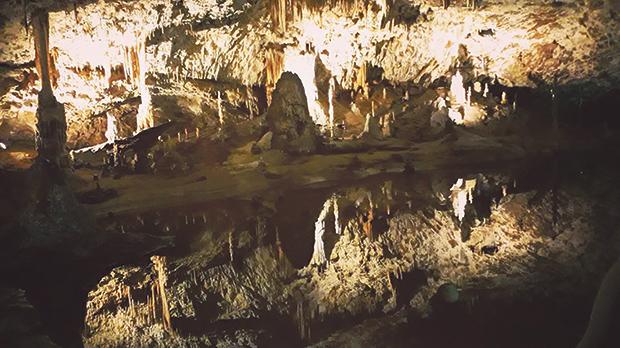 As we entered the caves, a four-metre-long stalactite welcomed us in the Front Dome, a large, hall-like space filled with myriad stalactites and stalagmites. Walking on, I was literally mesmerised as I encountered the Mirror Lake, whose waters are so clear as to leave one in total awe. Two worlds seemed to meet, divided by the water’s surface, as the crystalline stalactites met their counterpart through the underground lake’s reflection.

Steep steps took us up a 10-metre shaft-like tunnel leading to what is known as the Dome of Destruction, in reference to a cave collapse which had occurred sometime after the dome’s excavation. Following a corridor of naturally shaped water-columns, we were finally behind two impressive rock formations known as ‘The Angel’ and ‘The Curtain’. Looking up at the majestic play of water on rock, one cannot help but feel a sense of greatness at the power and wonder of nature.

Having covered almost 810 metres of the 1,250-metre tour, which is the longest underground trail open to the public in the Czech Republic – the best was yet to come. We proceeded in single file through a narrow tunnel passage opening up to the inspiring Macocha Gorge, also known as the Macocha Abyss.

This 138.7-metre deep sinkhole is the deepest of its kind in central Europe and can be viewed from the bottom up from the Punkva Caves. One can also take a cable car from the surface to the top to admire some unforgettable views.

Being in a cave while looking upwards at the sun through a gorge and seeing the green trees of the forest sparkle and being reflected in the two small lakes at the bottom of the abyss is truly a magical experience. Once our eyes adjusted to going from almost total darkness to blinding light in only a few minutes, taking selfies and almost full blown-out photoshoots was inescapable. 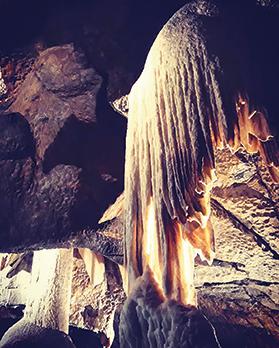 The Angel and The Curtain

At this point, our tour guide bid us goodbye as she led us to the second part of the tour. A small underground dock dotted with some tiny boats awaited us. Our group split up further, since the minute boats could only accommodate eight people.

Our second tour guide, an old, crusty man steering the wooden boat with a paddle, again spoke only Czech. In halting heavily accented English, he warned us sternly that photographs were not permitted on the boat, as this could be dangerous since we would be passing through very narrow channels, and any excessive movement could cause the boat to capsize. He also warned tall people to keep their heads and hands down, since some of the tunnels were quite low and they could easily hit their head on a stalactite.

I honestly thought he was joking, but he was dead serious and with good reason. The boat buckled alarmingly as we cast off and slowly meandered through the winding river.

As we left the small dock, the walls started to close in, together with the darkness and the cold. At that point, I was grateful I did not suffer from claustrophobia. Later I learned that the water of the river has a depth of approximately 50 metres, but at the time, feeling the weight of the earth on my head, twisting this way and that trying not to get hit in the head by a stalactite, the cold dark surface of the river seemed to hide something more sinister. The old man steering the boat reminded me of Charon ferrying the souls of the newly deceased across the River Styx, surrounded by seemingly fragile dripstones and colourful rock formations hanging from the cave’s ceiling.

Floating between the darkness of the caves and the darkness of the waters below through a succession of narrow tunnels with low ceilings and small fairytale pools felt like a breathtaking dream. In the end however, we had to wake up, as the boat floated up the river to the Punkva Spring above ground. This is where the tour ended.

Taking back the tram to the Visitor’s Centre once more, we were pleased to note that the smaller Katerinska Caves were only a 10-minute walk away, so we were overjoyed to visit them as well, before stopping at one of the charming restaurants nearby for lunch. An anti-climax, but a very needful one after such a memorable adventure.