Focusing only on reducing migratory flows from Libya at all costs risks de-legitimising the new Libyan government and de-stabilising the country, according to a new report about the political economy of Libya's human smuggling.

The report, The Human Conveyor Belt: An analysis of the industrialisation of human trafficking and smuggling in post-revolution Libya, was launched yesterday by the Global Initiative against Transnational Organised Crime and the European Centre for Development Policy Management.

The route from Libya to Italy remains the deadliest irregular sea crossing in the world, with more than 5,000 drownings there last year alone.

But this journey is only part of the dangerous trip that many take: some die while crossing the Sahara, while others are brutally detained or abused by militias.

The report, written by former Times of Malta news editor Mark Micallef, maps out the people involved, their networks and the flow of smuggling profits while highlighting the implications of the smuggling industry on Libya's transition and the stability across the Sahel-Maghreb. 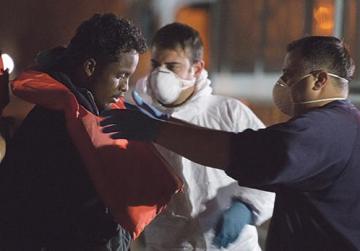 Launching the report in Brussels, Mr Micallef referred to the €200 million agreement that the EU recently reached with the Libyan Government of National Accord to stem the flow of migrants.

Mr Micallef, now a senior research fellow at Global Initiative, noted that the Libyan economy and employment being on their knees, migration was certainly not on the Libyan people's priority list.

Expecting the GNA to deliver on something that was considered to be an outsider's agenda risked undermining the legitimacy of the government, he said.

Meanwhile, before Libya had one centralised government holding a reasonable amount of control over security, Europe would not know where the money was going, Mr Micallef added.

Before Libya had one centralised government holding a reasonable amount of control over security, Europe would not know where the money was going

During the launch, he noted that while continuing with the process of facilitating and encouraging Libyan dialogue to set up a true government of national reconciliation, there were local political ecosystems that Europe could engage with, such as municipalities and local communities.

Mr Micallef also comments in the report that any advancement of the European Union’s border control plans must be accompanied by investment in the provision of protection and a relocation programme for refugees transiting through Libya.

“Human smuggling and trafficking, and the ancillary criminal activities they have sustained or spawned, have entrenched themselves in the fabric of Libyan communities across the country.

“Dealing with migratory flows at the end of the process on Libya's northern shores will very likely create sustained regional displacement and destabilising effects,” the report says.

It adds that the smugglers’ business model will only be undermined by action on the demand side. A substantive relocation system inside Libya and further afield would create asylum queues that would ultimately divert business away from them.