A food delivery driver was killed on Wednesday morning after a truck toppled over on Marsa's Aldo Moro road, smashing into lampposts and dropping its load of scrap metal onto opposing lanes of traffic.

Eyewitnesses described the "horrific" scene and how they feared for their lives as the DAF truck overturned when it hit the centre strip on the busy thoroughfare at around 11.30am.

Some of the metal fell onto 28-year-old Nepali food delivery driver Ajay Shrestha, who was riding a Kymco Agility motorbike in the opposite direction. He was rushed to Mater Dei Hospital but did not survive. 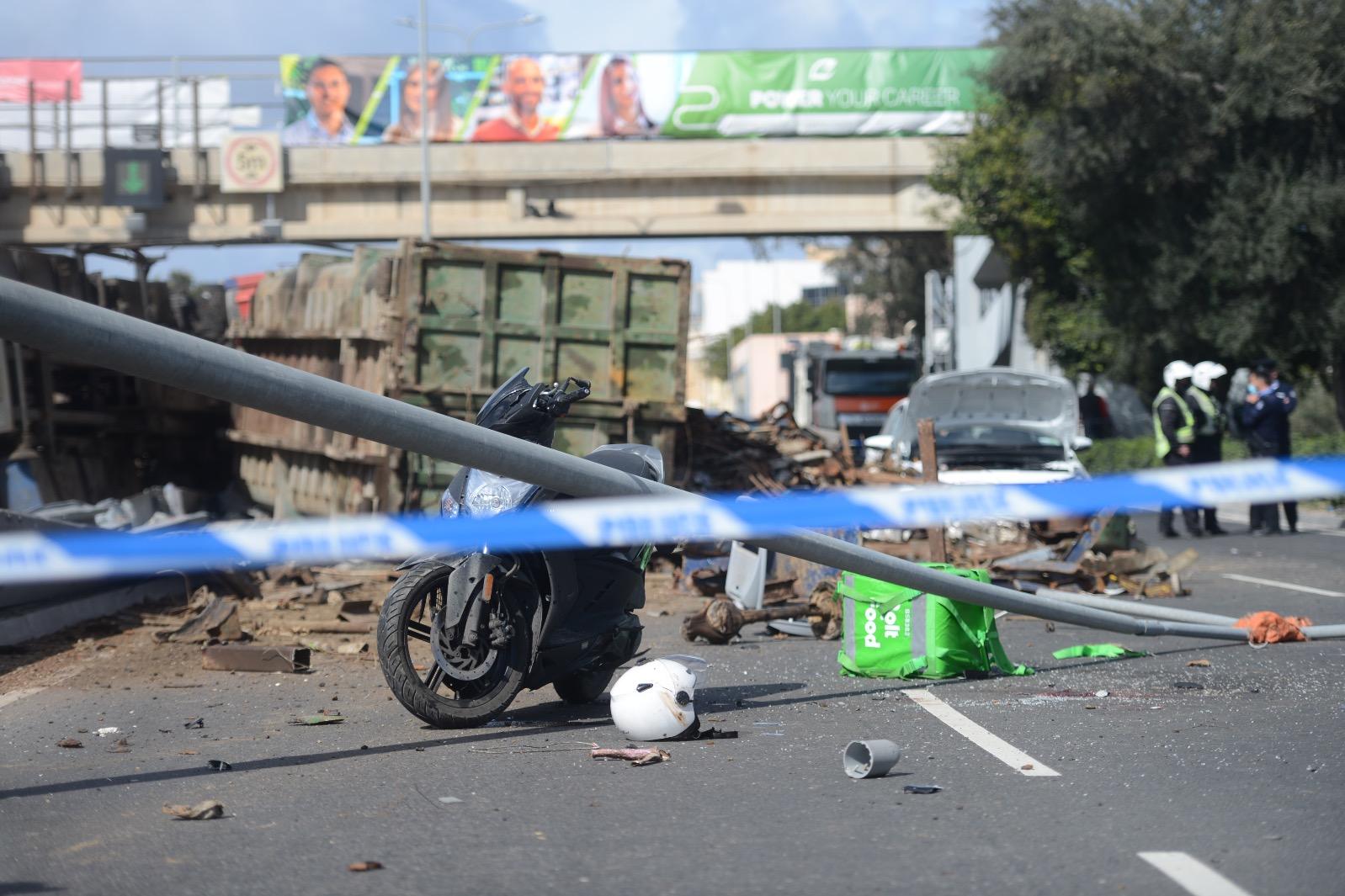 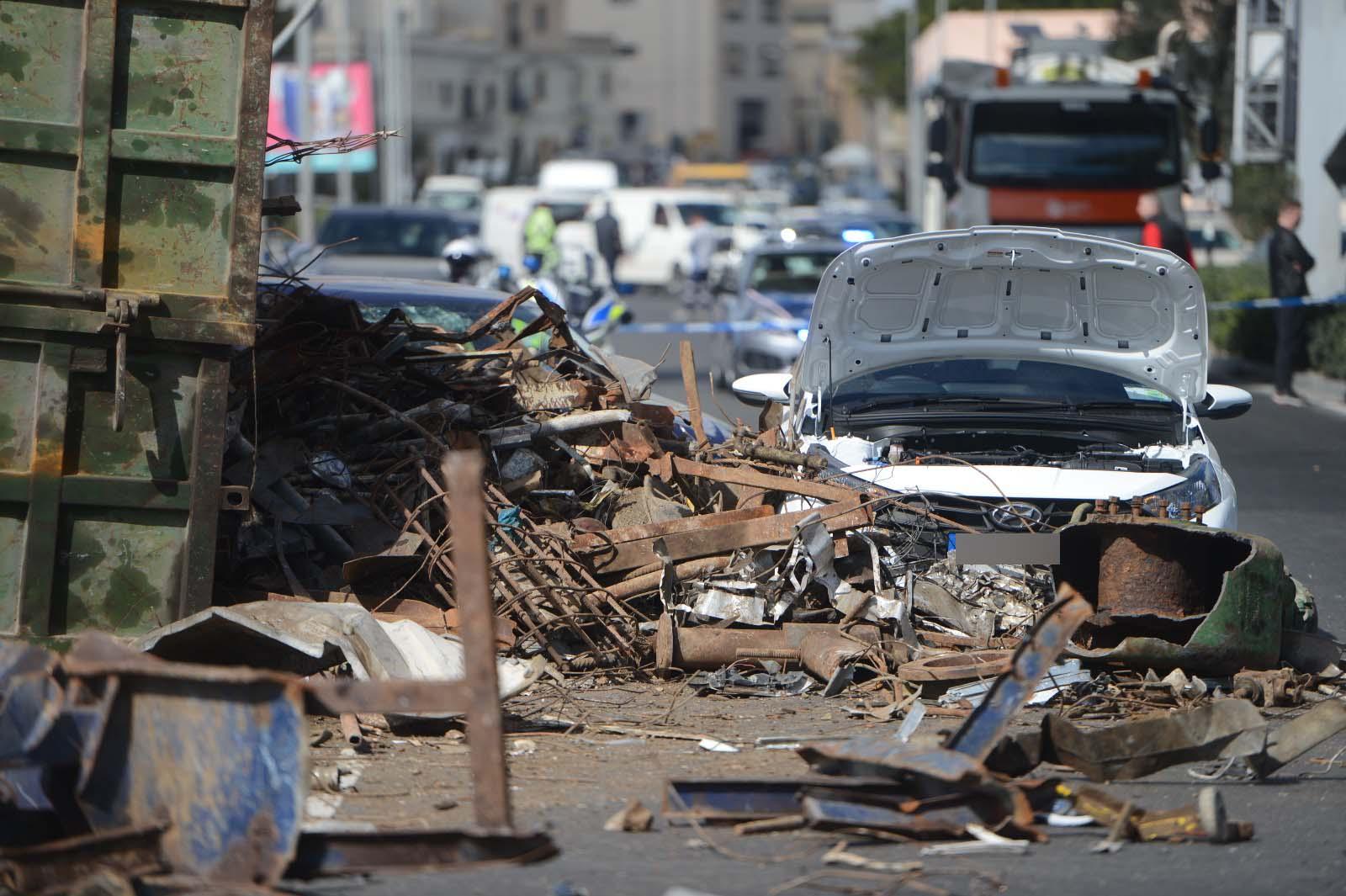 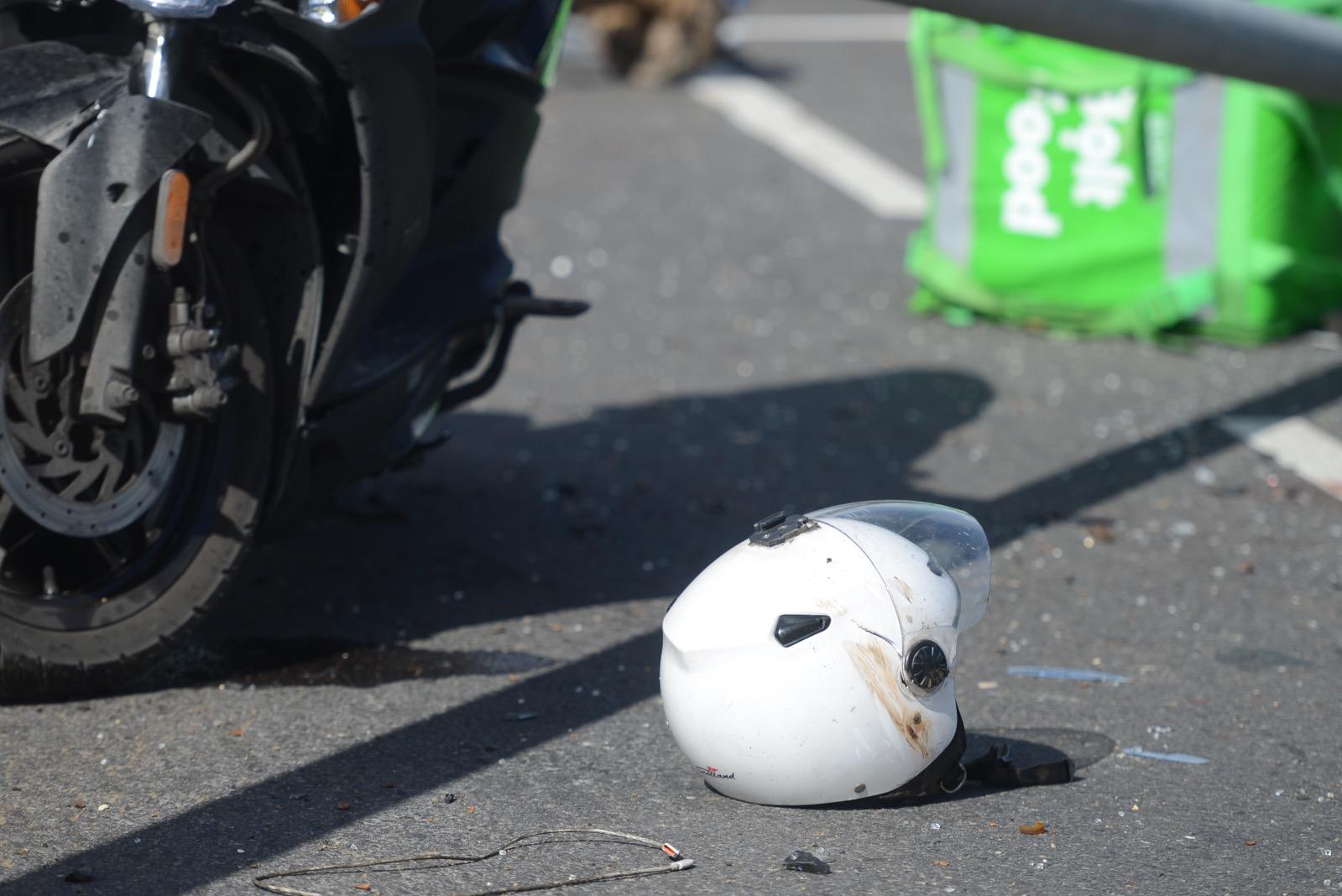 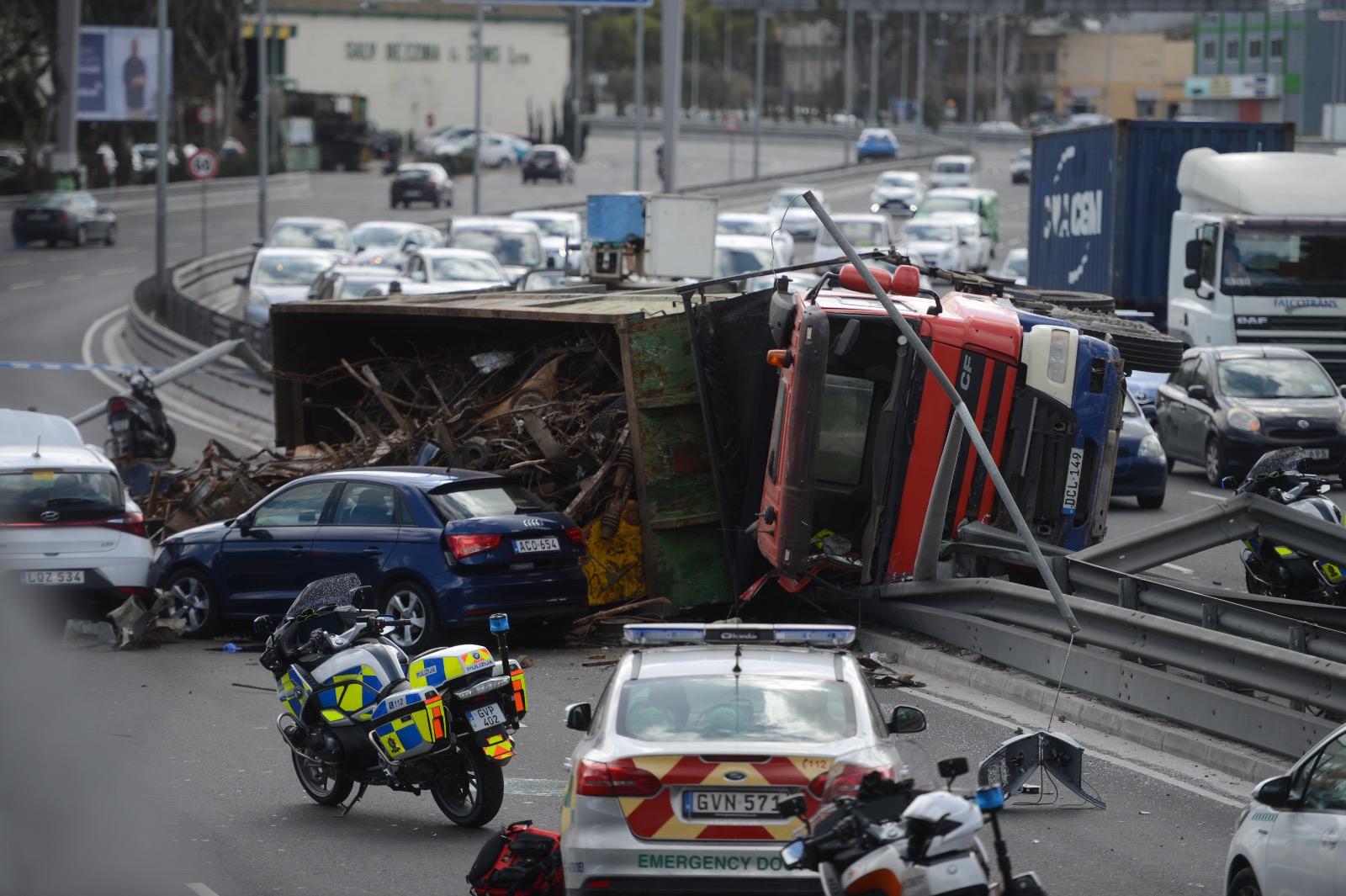 Two other vehicles heading in the opposite direction were also impacted by the crash. They were a white Hyundai i20, driven by a 39-year-old Lithuanian man, who was in Malta on holiday, and an Audi A1 driven by a 52-year-old from Swieqi.

Those two drivers, as well as the 56-year-old Cospicua man driving the DAF truck that overturned, were not hurt in the incident, police said.

Video taken shortly after the crash shows the trucks contents spilled on to the road.

Jordan Grech, who runs a food truck nearby, was one of the first people at the scene.

In a Facebook video, he recounted hearing a massive crash and running over.

"I can't believe what I've just witnessed... something horrific has just happened. I hope the person is OK," he said, his voice crackling with emotion.

He later described to Times of Malta how he ran out on the road to see if the Bolt driver was ok while calling the ambulance at the same time.

His mother, Anna Bellante, said that she was speaking to someone when she saw the truck start to topple over.

"I screamed, 'Oh my God! and saw the truck fall and hit the pole," she said. "I was so scared the pole and the debris would reach our food truck." 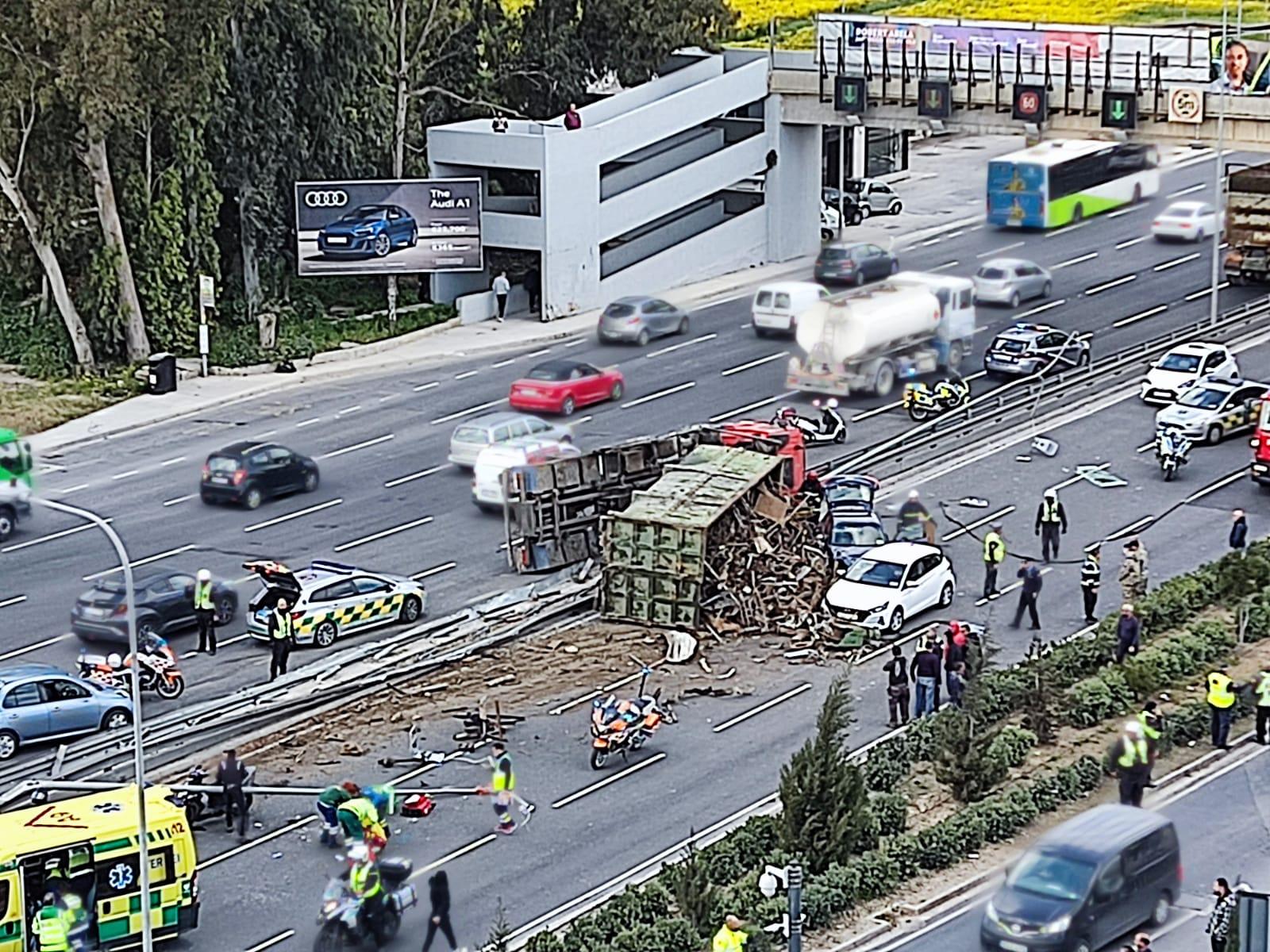 The owner of the Hyundai i20 involved in the crash was a brand new rental vehicle according to the owner, who arrived at the scene later. It had been on the road for only a week and its passengers, two men and two women, were on holiday, the owner said.

Magistrate Astrid May Grima is leading an inquiry into the incident.

As of 12.42pm, webcam footage of the Marsa Junction area suggested traffic was flowing well once again on northbound lanes but by 3.30pm, people were still reporting delays on southbound routes.

Correction February 17: A missing word in a previous version implied that other drivers involved in the collision were injured. They were not.

Correction February 18: The driver of the Hyundai car involved was Lithuanian, not Moldovan, the police clarified.

Did you witness the incident? Get in touch at newsroom@timesofmalta.com