Men, women and children rescued by an NGO vessel off Libya's coast have told the ship's crew they were tortured, enslaved and kidnapped in the North African country they escaped.

The Alan Kurdi is carrying 64 people it rescued last Wednesday and remains stranded in international waters outside Malta, with its crew warning that food shortages and bad weather are taking their toll.

The ship turned towards Malta on Saturday after Italy’s coast guard refused it entry to Lampedusa.

The vessel, which is operated by NGO Sea-Eye, rescued 64 people from a rubber boat on Wednesday April 3.

“Food and water supplies will run out shortly and the medical situation can deteriorate quickly once the storm sets in tonight,” warned Sea-Eye spokeswoman Carlotta Weibl on Sunday.

Rescued migrants outnumber the ship's carrying capacity and many are sleeping on deck, she added.

A Maltese government spokesman had told Times of Malta on Saturday that they were monitoring the situation.

'In Libya, they sell us blacks as slaves'

People rescued by the Alan Kurdi have told crew members they were tortured, raped and enslaved while in Libya.

One woman told the crew that she was trafficked and forced into prostitution.

"If you refuse, they will beat you or use knife on you," she said as she pointed to a scar on her left leg.

A rescued woman recounts her memories of Libya. Video: Sea-Eye

"Libya is the most terrible country I have ever seen," said Benjamin.

"They sell human beings. They have sold me twice," he recounted.

Sea-Eue spokeswoman Ms Weibl denounced Italy for their refusal to come to the rescue of the Alan Kurdi or its rescued crew.

According to the NGO, Italian authorities refused the vessel entry to territorial waters on the pretence that the Alan Kurdi and its passengers represented a threat to “peace, good order or security of the coastal state”.

That provision is listed in the United Nations Law of the Sea’s Article 19, which defines what constitutes a violation of innocent passage.

Article 19 lists a variety of activities, ranging from use of weapons to military activity, propaganda as well as “the loading or unloading of any commodity, currency or person contrary to the customs, fiscal, immigration or sanitary laws and regulations”, as examples of violations of a foreign ship’s innocent passage. 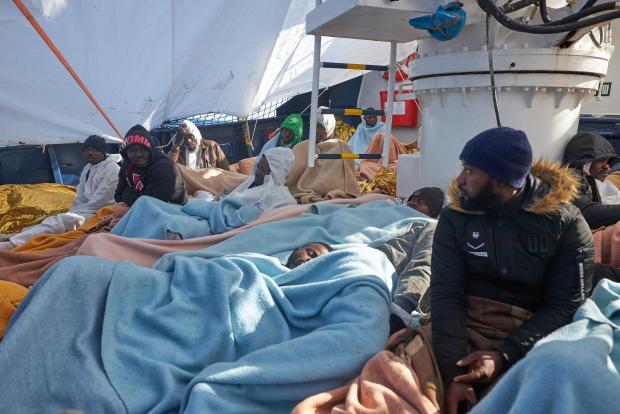 The Alan Kurdi abided by instructions and did not enter Italian waters.

Germany – the ship’s flag state - and the European Union have been negotiating with Italy to try and resolve the impasse, to no avail.

A deal to evacuate two families among the 64 rescued was aborted after Italy insisted that the fathers of each of the two families would not be allowed onto Italian soil, Ms Weibl said. The families refused to be separated.

“These are “rescued people” and should not be treated differently by categorizing them based on their legal status, as “migrants,” Ms Weibl said.

“At sea there is no migrant, banker or plumber: there are only people.”