Foreigners having a Malta residence permit will, after all, be getting the vouchers being issued by the government to get the economy going post COVID-19.

The government on Thursday afternoon issued what it described as a 'clarification' after  a government spokesman told Times of Malta that the vouchers would only be issued to the people listed on the General Elections Electoral Register.

The story caused uproar among foreigners who work and pay taxes in Malta, with many complaining of blatant discrimination. Some said they would limit their spending in Malta to the bare minimum as retaliation or transfer their taxes elsewhere.

When the vouchers were originally announced on Monday week, Prime Minister Robert Abela had said they would be distributed to all residents of Malta aged over 16. Five €20 vouchers will be issued to every resident, four to be spent in hotels, restaurants and bars, and the remaining to be spent at shops which were also closed during the COVID-19 emergency.

Concerns were sparked after an EU national posted on the Facebook group Expats Malta how she had been told by two budget helpline operators that only Maltese citizens are eligible. 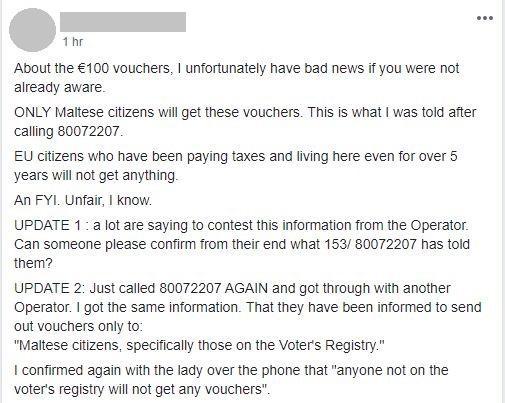 In its vaguely-worded statement, the government said that the electoral register was being used as a reliable list of addresses.

"The government clarifies that along with these addresses, there is also an updated list of the holders of residence permits based on the Identity Malta database. These persons will also receive the €100 vouchers that the government will distribute in the coming days," the statement read.

The vouchers will be distributed by Maltapost to the addresses listed in the electoral register and the Identity Malta database.