Brigadier Maurice Calleja, a former commander of the Armed Forces of Malta, has died. 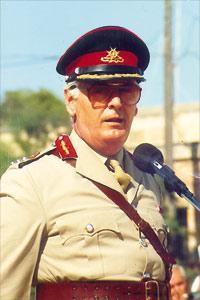 Trained at the Sandhurst Military Academy in the UK, Calleja was well known for his expertise in weapons handling and was a court ballistics expert for many years.

He was commander of the army's Task Force in the 1980s and served as commander of the Armed Forces of Malta between September 1991 and December 1993 resigning because of fears of a conflict of interest after his son Meinrad was arrested and charged with the importation of narcotics. He denied involvement in the case.

Meinrad Calleja was convicted and sentenced to 15 years imprisonment and fined Lm30,000 for drug trafficking but jurors later cleared him of separate charges of aiding and abetting in the attempted murder of Richard Cachia Caruana, personal assistant to then prime minister Eddie Fenech Adami.

Maurice Calleja remained close to the army after retirement and regularly attended former officers’ events. He also continued to serve as a court expert and in 2013 was appointed to head a board that considered complaints of injustices in the AFM. He was also chairman of the Weapons Control Board.