Joe Cilia, regarded as one of the best Maltese players of his generation, has passed away, aged 79.

The robust defender was a member of the Malta team that played against Austria at the Empire Stadium, Gżira in 1957, the country’s first official international match.

Earlier this year, Cilia was among the players who were honoured by the Malta Football Association during a reception held to commemorate the 60th anniversary of that landmark occasion for Maltese football.

He went on to make 10 appearances for Malta, captaining the national team once in the friendly match against Italy’s C selection in 1964.

After beginning his career with Rabat Ajax, his hometown club, Cilia moved to Valletta FC in 1956.

With the Citizens, Cilia not only enhanced his reputation as one of the country’s leading players but also won an array of honours.

Cini lifted the league championship three times, won the Cup twice as well as the Cassar Cup and the Scicluna Cup.

It says all about Cilia’s talent that he has won the coveted MFA Footballer of the Year award twice during his career, in seasons 1957-58 and 1963/64.

Cilia also had a spell as player-coach of Sydney-based Melita Eagles after moving to Australia, where he also turned out for Sutherland and Corinthians. He eventually returned to Malta, rejoining Valletta in 1972. 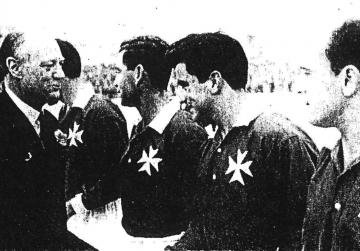 Cilia also enjoyed a successful coaching career, taking charge of a host of clubs, including Valletta, Floriana, Hibernians and Rabat Ajax. During his spell at the helm of Rabat Ajax, Cilia steered the team to the top-flight title.

Joe Cilia's funeral will be held on Tuesday at St Paul's Parish Church in Rabat at 4pm.