Former Gozo Minister Anton Refalo told constituents on Wednesday that he might not always be able to help them and their families out, "given the circumstances".

Writing on Facebook hours after he was excluded from Robert Abela's Cabinet, Dr Refalo said that he might not be able to repay constituents for their backing but that he appreciated their encouragement and confidence. 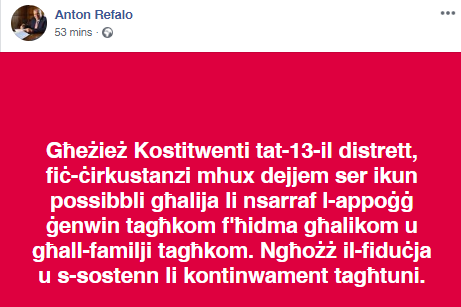 Dr Refalo was Minister for Gozo in Joseph Muscat’s first term but was not re-appointed when Labour was re-elected to a second term in 2017, despite doing well at the polls. He instead accepted a top role at Heritage Malta.

The prime minister was asked about the decision to omit Dr Refalo during a press conference.

“I can only appoint so many people to Cabinet, and the decision had to be taken," he replied.

The Gozo Ministry has been retained by incumbent Justyne Caruana, who reportedly managed to convince Dr Abela not to hand the office to Clint Camilleri, the former parliamentary secretary for agriculture and animal welfare.

Mr Camilleri, who is also a Gozitan, was instead made a minister while retaining his responsibilities. He was also given responsibility for consumer protection.

Dr Refalo could not be contacted on Wednesday.