Notary Ian Castaldi Paris, the former president of the Nationalist Party's college of local councillors has this morning officially pledged his support to Prime Minister Joseph Muscat and the Labour movement.

In a surprise appearance at the general conference, where he addressed delegates, Dr Castaldi Paris said the government's work over the past two years had convinced him of the values that underpinned the movement.

"Forgive me Prime Minister but during the election campaign I did not believe you but two years down the line I am convinced this is a movement that has Malta's interests at heart," he told delegates, who greeted him with a standing ovation. 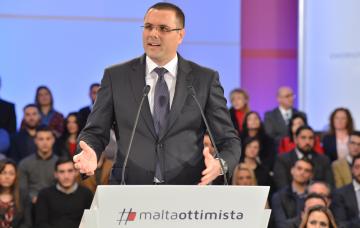 Speaking in glowing terms about Joseph Muscat, Dr Castaldi Paris said it was good to have a Prime Minister who was able to take of the mantle of Prime Minister and become "a father and a listener".

He said he left the PN, which had transformed into a party that used people and threw them away.

Dr Castaldi Paris then pledged support to the Prime Minister and the movement.

A former PN mayor of Lija, Dr Castaldi Paris had resigned from the PN in July last year after an uneasy relationship, claiming the party had not showed him respect.

At the time he did not specify what the reasons were.