An 11-year freedom of expression battle in the courts involving two former Times of Malta journalists has finally been brought to a close after Malta's State Advocate conceded the case before it was due to be heard by the European Court of Human Rights.

The ruling concerned the publication of a front-page article in The Sunday Times of Malta revealing that a nurse and a salesman had defrauded elderly patients.

While the facts were never in question, the Malta Union of Nurses (MUMN) council members sued the news organisation because the sub-heading labelled the nurse – who was chairman of an MUMN section committee – as a ‘top MUMN official’.

The nurse was not named in the article for the avoidance of confusion with his namesake who happened to be a high-profile cardiac surgeon; yet all the MUMN council members sued the newspaper, claiming that the sub-heading was defamatory in their regard.

The journalists believed they had been vindicated by a decision of the lower Constitutional Court in 2017 – which ruled that the use of the term “top official” was a value judgment and that the article was in the public interest – only to be criticised in the final appeal judgment by Malta’s most senior judges sitting on the Constitutional Court two years later. 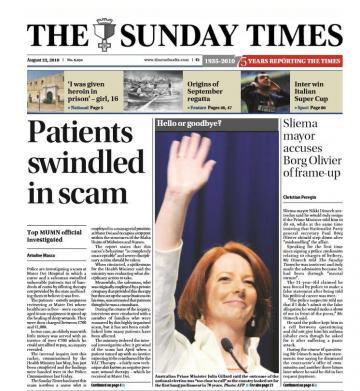 However, as the journalists’ case came closer to being heard in Strasbourg, the State Advocate took up the ECHR’s offer of a ‘friendly settlement’, agreeing to pay damages of €15,000 which takes into account the considerable costs involved in filing the case.

Mallia and Massa, whose assets had been frozen by the local court, said: “We always believed it was an injustice for the news organisation to be penalised for exposing a scandal – especially as we had taken great care in how to present the story – and, while we are delighted that common sense has prevailed, it is disappointing to note that this had to happen outside of the realms of Malta’s legal jurisdiction.”

“It is pertinent to point out that former ECHR judge Giovanni Bonello had only last year highlighted that practically every judgment on freedom of expression delivered by the Maltese courts was ‘found to be legal nonsense’ by the ECHR.”

“Dr Bonello had added: ‘This… shameful… scenario only reflects the relatively small number of Maltese libel cases that actually reached the ECHR. After four levels of judicial proceedings in Malta, after years of toing and froing to the courts, after crippling legal costs and fees, most defendants are usually too drained, too dispirited, too disenchanted with the court system to even contemplate reliving their calvary in a fifth court in distant Europe’.”

Mallia and Massa said they hoped that, going forward, Malta’s courts would show more willingness to uphold freedom of expression when media reports met universal journalistic standards and were in the public interest.

“We would also like to thank Allied Newspapers Ltd, publishers of the Times of Malta, and our lawyers for having the courage to back us every step of the way,” they said.